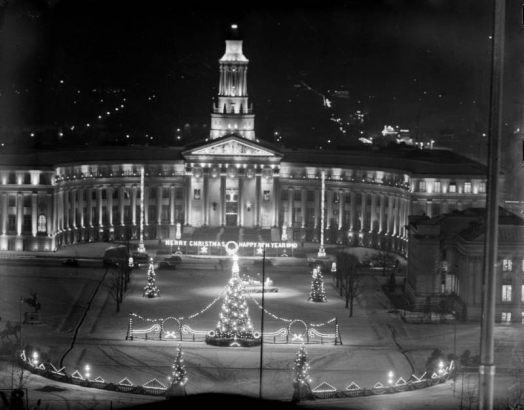 Whether you've lived in Denver your whole life or just a few months, you can't help but notice that the Mile High City is changing at a rapid pace. Whole swaths of town are rendered unrecognizable to longtime residents as developers swarm on every inch of land that offers an opportunity to build new houses and businesses.

There is, however, one part of town where you can still get a view of Denver as it's always been (at least since the early 20th century). That place is the City and County Building and its annual holiday lighting display.

The light display at Denver's City Hall dates back to 1922 when a city-employed electrician named Johnny Malpiede approached then-Mayor Dewey Bailey with a plan to light up the relatively new City and County Building with a display of lights for the Christmas holiday. Mayor Bailey was on board, but warned the spirited electrician to keep the cost under $100.

Those early displays were centered mainly on Santa and his elves (not the same elves that are displayed today) and steadily grew in both budget and scope. By the 1950s Malpiede's work was drawing negative attention. One anonymous commenter quoted in a December 3, 1950, column by Pasquale Marranzino flatly stated, "He works like a drunk cake decorator. Too many spangles and brilliants. Tone it down."

That kind of criticism led the Mayor to hire an out-of-state consultant to set up the lights, a move that flopped badly when the man from Michigan created a modernist fantasy that didn't sit well with the good people of the City of Denver. So the local boy was brought back in and oversaw the lights, using salvaged equipment whenever possible.

Sometime in the early 1940s, a nativity painting was added to the display and in 1953, the painting was replaced with a rubber model. That particular display was the subject of a 1979 lawsuit and, ultimately, the reason for the display's hodgepodge of counter-displays, including an odd collection of elves in Santa's workshop that no one can seem to remember purchasing.

When the lawsuit, which centered around the religious imagery in a public setting, was finally settled 1986 via a Colorado Supreme Court ruling, it was determined that the nativity's main purpose was to, "...promote a feeling of good will, to depict the historical origins of the national holiday and to contribute to Denver's reputation as a city of lights." This according to reporting that appeared in the Rocky Mountain News on September 9, 1986.

The Court's ruling suggested that the nativity was just another piece of Christmas memorabilia - no more, or less, important than those strange country elves. Not surprisingly, reactions to the ruling, and the nativity's continued presence at the City building, cover the entire spectrum of public opinion.

Controversy aside, the lights at the City and County Building are an enduring tradition that does, indeed, go back to a time when Denver was regarded at the Christmas lighting capitol of the United States. And today, as thousands of new residents pour into the Mile High City, there is still this one spot that remains relatively untouched by the hand of change.

Is it possible that the earliest displays in the 1920s were on the previous City Hall? The cornerstone of the current City and County Building was not laid until 1932.

Yes. In re-reading it seems as though we should have made that a little clearer. Thanks for catching that!

There were holiday displays in Civic Center park that may pre-date the current City and County building.

Hi Phil - You are correct. As you probably know, Denver was absolutely crazy for Christmas lights for an extended period of time.

I would love to see a picture of the elves!

They're pretty shifty and very hard to photograph!

Great blog post, Brian--indeed, keeping the holiday lighting on our Courthouse is very much a Denver tradition & one I hope stays with us in perpetuity!

Wonder if we will be able to keep the view of our lovely/beautiful Rocky Mountain skyline visible from Civic Center Park, as well. A while ago, developers wanted to build west of our Coors Field stadium, which would spoil the mountain view for ballpark guests--but thankfully that was shot down. But the City's skyline is changing practically everyday--before you know it, we might turn into a Chicago, New York City or Houston, and we could if we keep going the way we are now! Let's keep Denver, Denver!!

The lights today still don't compare to the lights that were displayed back in the 50's and 60's. Don't get me wrong the lights are still pretty today with the new type of lighting.