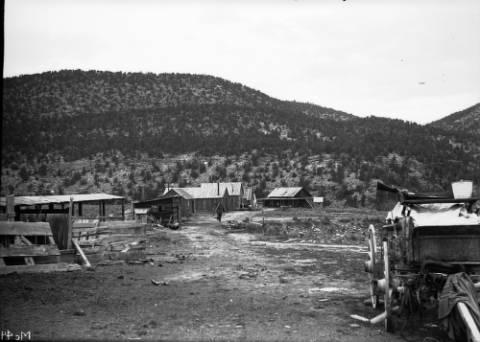 The Colorado Cooperative Company organized against the backdrop of the Panic of 1893, a horrible financial crisis in which “Discontent and unrest were prevalent everywhere. Defeated men had begun to cast about for ways of escape from other such disasters.” (from The Spell of the Tabeguache by Ellen Z. Peterson). Even before finding a place to live, the colonists drafted a Declaration of Principles. These principles stated that “Man can never enjoy his highest freedom, individuality, intelligence and refinement, unless it be through a system of cooperation… in strict obedience to laws conceived in kindness and based upon equity.” They called their town Piñon (later changed to Nucla).

In the 19th Century, people all over the country and in Colorado founded colonies based on principals of communal living. Some, like the Union Colony in present day Greeley or the Oneida Community in New York State, organized around religious beliefs. Religion quickly caused splintering and disaffection from Colorado’s most famous colony, but the colony’s adherence to the tenets of the temperance movement lasted longer. Greeley was a dry town until 1972! Though not all colonies shared an adherence to religion, most of them were founded as places where cooperative communities of shared values and mutual respect could foster the most worthwhile person and allow for the most perfect individual pursuits. What made these colonists different than hippies or David Koresh was the fact that these were farmers, town builders and skilled laborers with the financial backing of investors who shared the ideals of Jeffersonian Democracy.

Piñon had many community-run ventures, including a mill, hen house, a newspaper called the Altrurian, and a ditch company. In the first years of the colony, food production was low and food was rationed, meaning not a lot got onto each person’s plate. The colony made the digging of an irrigation ditch to water crops a priority. All able bodied men worked on the ditch. The few slackers were soundly belittled by all. But Piñon struggled with the labor and expertise needed to complete the project. In 1896, a group of members tried to take over the colony leadership, claiming that the ditch project was wracked by “malfeasance and dishonesty.” This caused a rift in the community. Some thought that these rabble rousers were actually members of some government agency opposed to the cooperative movement. By 1899 the ditch still was not done. Denver shareholders of the colony filed legal papers to take over management, though they had not contributed any physical labor to the colony. The colony banded together to defeat the Denver shareholders.

In 1901, a fierce debate took place about whether the ditch company should be separated from the colony and made a publicly owned venture. This would have given outside stock holders just as much voice as those who actually worked on the ditch. This measure flew in the face of the ideals that most in the colony held. It was thrown out, but this battle was the beginning of the end for the colony as a cooperative venture. A few months later, the colony instead hired a private company to build the ditch. Other contracts soon followed. A few years later, Nucla still existed, but the only thing communally owned was the ditch (which had finally been completed). For photographs of Greeley and Piñon search our Digital Collections. For more information on the Union Colony and Colorado Cooperative Company, search our catalog, the Western History Subject Index, or just come into Western History and Genealogy!

Robert Lafayette Veatch and uncle of my mothers, born in 1866 , migrated to Gypsen valley Colorado in 1883, and than joined a colony in Nucla, he married my great aunt in Pinion in 1903, in 1919 the family went to Roseburg Oregon where they remained for a year, and than migrated to Ringwood Oklahoma.
Thanks for reading and sharing that information with us, Tom!
Mabel Veatch Hoadley wrote a book titled The Gods give thread covering her childhood spent at the Colorado Cooperative Company from 1893. I don't know if the book was ever published, the copy I have is type written. It includes a copy of the Articles of Incorporation. rlmusson@charter.net