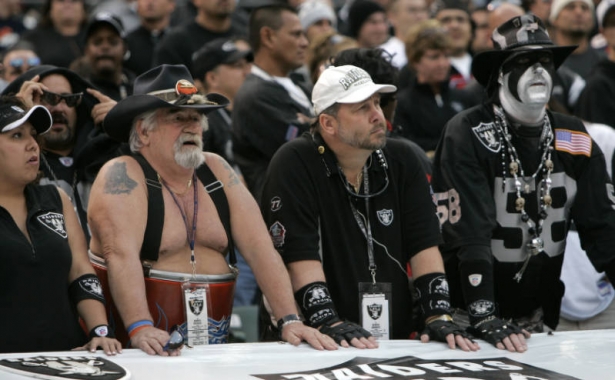 Denver Broncos fans are known as some of the most fanatical football fans in America, but one fan stood a Mile-High above the crowd, Barrel Man (aka Tim McKernan).

Barrel Man was a fixture at Denver Broncos games beginning in 1977, when he bet his brother that he could come up with a costume that would get him on TV during a game. McKernan won the wager, a princely sum of $10, and inadvertently created a Colorado legend. For the next 30 years, Barrel Man was at all but four of the Denver Broncos home games, wearing nothing but a cowboy hat, cowboy boots, a barrel, and a smile.

When he wasn't rallying the Denver Broncos faithful in the legendary South Stands at Mile-High Stadium, McKernan worked as a mechanic with United Airlines and lived with his wife in Gunnison.

Though McKernan's doctors limited his time in the barrel to just one half of the game in his later years, when he suffered a number of health issues, this die-hard Denver Broncos fan was pretty much unstoppable.

Barrel Man wasn't, however, simply a yokel who achieved local notoriety; he was a towering figure in the world of football fandom. Just take a look at the picture above - was there ever another Denver Broncos fan who could sit unmolested in the notorious Black Hole at the Oakland Stadium?

Sadly, the Barrel Man passed into eternity on December 5, 2009. His legacy has been honored in a number of ways, including a statue at Mile High Stadium. (Fans have long rallied to have Barrel Man included on the stadium's Ring of Fame but, so far, their efforts have been for naught.)

Whether he makes it to the Ring of Fame or not, Barrel Man is forever a part of Denver history and we think it only proper to offer up a sincere Mile-High Salute in his honor on the eve of the 2016 season.

He was really great on all levels. Thanks for the comment!

You can see his barrel on display at History Colorado.

Thanks for the reminder Jamie - a downtown trip to visit History Colorado and the Central Branch is time well spent.

Barrel Man is in the Super Fans section of the NFL Hall of Fame. He was enshrined in the 1st class of Super Fans in 1999

1st class of Super Fans and a class all by himself.

I had the honor of meeting "The Barrel Man" and his wife in a more cozy setting at the IHOP restaurant in Bear Valley. My daughter had just gotten her new cast on her broken leg and we decided to go have dinner. Low and behold sitting at the table next to us was "Barrel Man". I am a die hard fan and it was super hard to just sit there and not bother the two of them while they were eating, I think they noticed. So, his wife pulled out some trading cards with their pictures on them and they autographed one for each of us. They were the most down to earth friendly couple ever. They were such a pleasure to meet. I still have all 5 cards that they autographed. RIP Barrel Man!!!! Go Broncos!

Thanks for sharing that wonderful Barrel Man memory with us, Shannon. He was a really special guy and Denver was lucky to have him.