We recently had a local schoolteacher come in to discuss the issues of immigration, bigotry and segregation in Denver. His hope was to gather historical materials that would convey to his students the seriousness and long-term impacts of the issue. Naturally, we included the Klan Collection in our research. For those who are unaware, the Ku Klux Klan was a massive presence in Denver in the 1920s to the point of being openly embraced by many civic leaders. While their history and views came as no surprise, their 1924 pamphlet on immigration was quite startling, not for its bigotry, but for the seemingly contemporary nature of its language.

With the rise in physical and rhetorical attacks against immigrants, Jews and other minorities by extremists in recent years, we have a substantial body of language to compare to similar ideological movements of the past. History is supposed to rhyme, but the nearly identical nature of the language, narrative and prescriptions in this 1924 pamphlet and in modern anti-immigrant rhetoric is quite astounding. 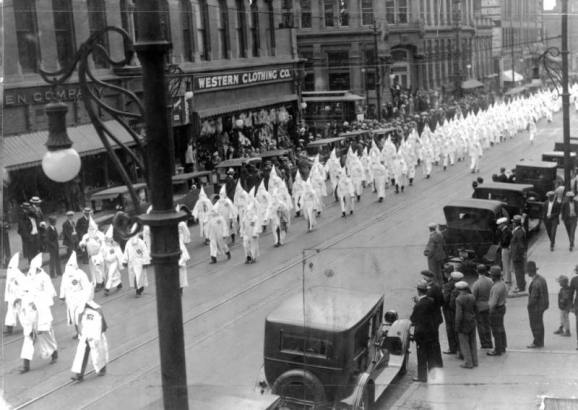 1926 May 31
Parade in Denver proceeding a convention of Klansmen

Something that appears to be common in all such movements is an acknowledgement of our immigrant past, but a sense that immigration itself must remain in the past. At the same time there is a strong nostalgia for a mythologized history. In 2018, the 1950s have been deeply romanticized. In the case of the 1920s Klan, they hold fast to a very similar spread of years. They claim that 50 years ago was a great time when the U.S. was bringing in the right people. Oddly, the klan has the same fixation as modern racists with Scandinavians.

"Scandinavian types of fifty years ago, in search of home, God and freedom, and whose sons and daughters are today loyal and patriotic Americans..."

And, while immigration was fine in the past, the same racist movements in 1924, as in 2018, emphasize that the country is now full and further immigration will only serve to deny "real Americans" of jobs and opportunities.

One notable difference between then and now is, predictably, the groups targeted. While African Americans, Jews and Catholics are always popular targets, the reactionaries of 1924 also seem to hate Finns, all central Europeans (including Germans) and Mediterraneans. Granted, they still leave space in their verbiage for Latinos, which they claim are a dangerous "alien horde" waiting to cross the Rio Grande and destroy the U.S. labor market. It's as if that headline and its accompanying logical fallacies have been recycling themselves for centuries. While the targets aren't always consistent, they adhere to the same repeated tropes of the immigrant masses being "low class" and "non-assimilable" and simply, "extremely hard for this country to absorb." Not only does history rhyme, but it sometimes quotes itself.

So, is there something to be learned from all this? Just as we look to history to avoid the failures of Versailles and the ever-resonant cataclysm of WWII, we must also learn to recognize the organizations and arguments that constantly inject themselves into political life in order to divide us. The past cannot be changed, but history is also not static. It is about direction and momentum and that does not simply end with each passing of the second hand.

We preserve history so we can see what was set in motion and judge which movements occurring in our own time are accelerating us towards the dream of a future — and which are aimed squarely at the precipice. We can't know everything, but a healthy study of history can be a great defense against darkness and ignorance.

I agree, build the wall.

Thank you for illustrating something that you probably didn't intend to.

Yes, I agree, build the wall. Nothing I just read has been said about the current situation. They are NOT immigrants, they are illegals.Live decent lives..Black, White, Hispanic etc. And God will help you. Quit whining. My life has been extremely hard, but I am not whining about it, nor does it give me an excuse to hate anyone,steal from anyone, or get special perks or act like an animal. Last but not least, not every one is going to be rich and famous from rapping and hip hop..more important than MONEY is acting like a decent human being and not blaming others for every problem you have.Life is HARD for MOST of us whatever the color.

You said what's important is "acting like a decent human being and not blaming others for every problem you have." And yet here you are...blaming immigrants for problems...

I agree here Rebecca...I too have been thru' a hard life..I tried 3 times to find a good job with starting pay at 10 to 12 an hour..Been to School 3 times for job training and received good grades. I was turned down because of some reason or another..

Wonderul example of an historic document(s) the Library offers for people to learn local history as well as true perspective, further illuminating parallels and intersections between yesterday and today. Thanks Alex.

Unfortunately, as you mentioned, the rhetoric used by some current government officials echoes this nasty, ugly sentiment concerning human beings in complex sets of situations, NOT simply “animals.” Progress much?

The library system's original intent was to give the average person a chance to move up by allowing them to improve themselves through self-education. It's sad that 'politics of envy' intervened and turned our public libraries into an extension of the public welfare system. It cuddles and provides no-pay jobs for no-skilled workers and perpetuates the belief that the system is rigged ala the Al Sharpton school of politics while a wealth of free knowledge is there for the taking for anyone willing to pay the price of studying.

It seems perplexing that an article about klan bigotry at a time when the klan ran most of Denver's government leads you to denounce the very idea of any rigging and leads you to attack, seemingly out of nowhere, Al Sharpton. Or, perhaps, its not perplexing at all.

(I continue to be amazed at how ignorant and delusional some people are about their bigotry.)