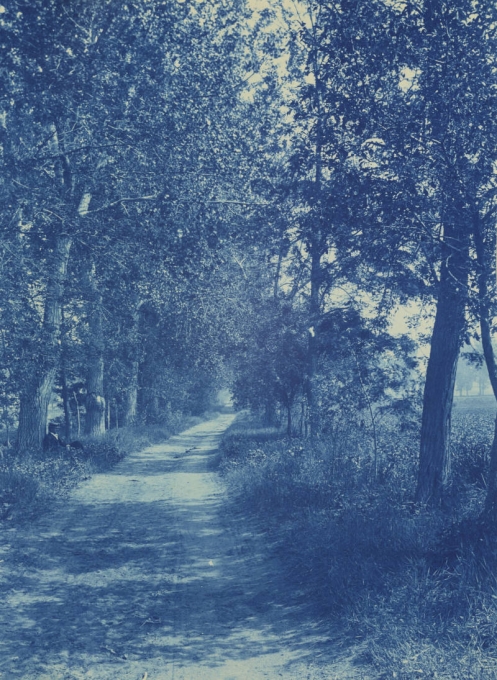 The pastoral scene above is not something out of a post-bellum Southern postcard or an illustration from a Mark Twain novel. This is what the town of Harman, now known as Cherry Creek, looked like in the late 19th century. Decades prior, there were reports from early settlers that the cottonwood and pine trees lining the banks averaged 3 to 4 feet in diameter, a bounty of lumber that would continue to be exploited into the 1930s. Centuries before the arrival of the first white settler, there was archaeological evidence of maize and amaranth being grown in the vicinity. There also appeared to be a modest amount of cross-cultural trade prior to the erection of the modern mall complex. This included plains-style moccasins alongside yucca-woven sandals and some seashells that could have only come from the Gulf of Mexico or Gulf of California. The modern trading Mecca and urban residential district of Cherry Creek is now bounded by 6th Avenue, Alameda Avenue, and University and Colorado Boulevards. 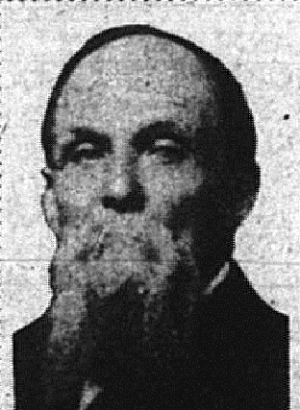 It might surprise some to find that the town of Harman was founded by a lawyer/Confederate veteran and his wife, who relocated from Mississippi in 1872. Another interesting twist in the story involves early writers of Denver’s history crediting “L.B. Harman” with the founding of the town. No record of any L.B. Harman exists in the library’s records of the time, but the 1874 Thayer’s map clearly shows the area to be owned by Lou G. Harman, the wife of Edwin. It is, therefore, not clear which member of the couple actually invested the money and founded the town, but, on paper, it seems that Louise (Lou) Glover Harman was the official town mother. It has been suggested that Lou may have been a war widow before marrying Edwin and had applied for land via the Homestead Act. Edwin, as a member of the Thirteenth Regiment of Mississippi Infantry, would have been excluded from any such land grants. So far, however, no homestead patent has been found in her name.

By 1882, a number of lots had been sold off and the town was officially founded, though an official vote on incorporation didn’t pass until 1886. At that time, the community lacked a central water supply, had ungraded streets, and a nearby creek was used by much of the Denver area as an outlet for sewage. According to an 1887 Denver Times article, “Harman incorporated because irrigation for crops and trees was needed for protection against tramps, bums, bummers (roughneck hoodlums), and the liquor traffic.” Just as the town was coming into its own, the Panic of 1893 hit the country and Colorado suffered particular calamity due to the collapse of silver prices. Towns like Harman were rendered bankrupt and Harman residents voted to become part of Denver in September of 1894. Since then, the neighborhood has seen plenty of change and growth, from city garbage dumps and homeless encampments on the site of the current mall to trendy hunting grounds for fashionistas. 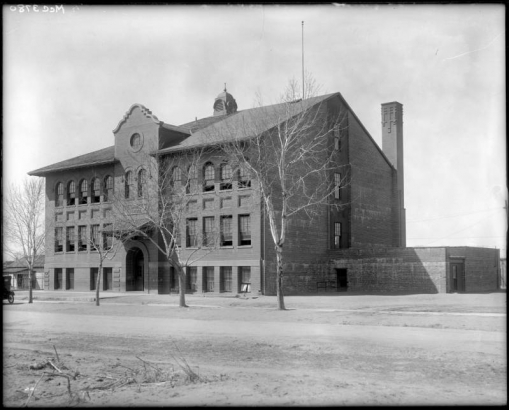 The first Harman schoolhouse was built of wood frame in 1867 on the site of what would later become the Bromwell School’s gymnasium. Prior to the construction of the town hall in 1891, it was used for political events, church services and town board meetings. The building was razed in 1883 by a coal furnace fire and was replaced with the iconic Colorado sandstone structure pictured above. The new structure continued to serve as a community center and even added a public reading room and library in 1892. In 1906, the school was renamed for Henry P. H. Bromwell, a progressive politician who helped craft the state constitution and was an advocate for free, universal education and women’s suffrage. In 1976, the school was demolished and replaced with the modern Bromwell School. 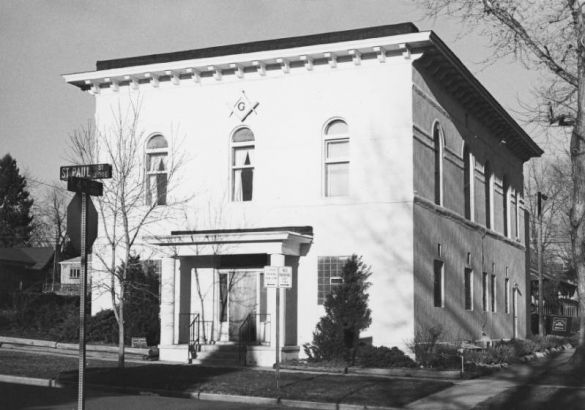 In 1889, trustee John McElroy lobbied for $100.00 to be apportioned in order to construct a formal town hall. A search for a proper plot was begun in earnest in 1891. As land values had already begun to skyrocket due to land speculators, the hefty sum of $1,000.00 was paid to Walter Dunning for his lot at the corner of Vasquez and Ellis (now 4th Ave and St. Paul). Architect, Franklin E. Kidder was hired to design and build the structure. He was best known for designing a number of churches and the remodel of the Broadway Hotel. The style has been described as “an Italianate Victorian brick structure.” It is highlighted by wood brackets under the cornices on the street-facing sides of the building. The upper story is adorned by tall sash windows slightly recessed beneath brick arches. This design is similar to the later Denver Square style and was quite common among commercial properties of the time.

During its brief period of service, the town hall was used for Bromwell School graduations, dances, meetings and other social gatherings. By 1895, Harman was annexed by the City of Denver and was no longer needed as a town hall. Upkeep had also become expensive even with regular use payments by groups like the Order of Oddfellows 105. For a number of years, it also housed the police station and fire department for the district. In 1934, an ordinance was passed to facilitate the sale of the building to the Lawrence N. Greenleaf Masonic Building Association for the sum of $1,000.00. Greenleaf was a well-known merchant, education board member, and pioneer poet who went by the pen name Peter Pun-ever. In 2005, this piece of history was sold to developer Paul Kobey who converted it into a private residence. 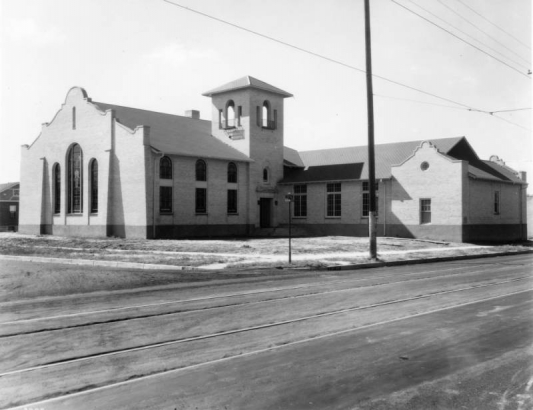 The church grew out of a Sunday school program that began in 1887. The congregation was formalized the next year as the Union Congregational Church of Harman. Initially, the group, like many others, would meet for services at the Bromwell School. Later, they moved to a space over the Boot Grocery Store at Clayton and 4th Avenue. That building burned down soon after and the congregation met in various locations including spare rooms and tents. By 1892, the congregation had saved enough money to purchase a site at 4th and Cook St. It was then dedicated as the 4th Avenue Congregational Church.

In 1925, the congregation purchased four lots at 6th Avenue and Adams St. for the erection of their current structure. Noted local architect William N. Bowman was chosen for the job. He was known for Gates Rubber buildings, the Fairplay Hotel, the Denver Telephone building, and other religious and commercial structures. This church represents an excellent example of the mission-style architecture that was popular at the time. Highlights include curvilinear parapets, rounded arched windows, and terracotta decorative elements. For this reason, the church is now listed on the National Register of Historic Places. 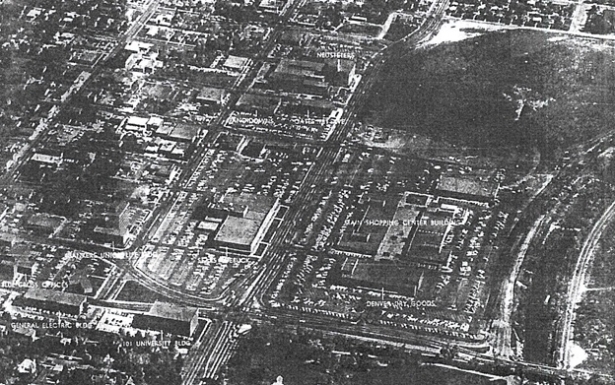 Temple Buell was born in Chicago in 1895 and moved to Denver in 1921 in order to recover from tuberculosis and the effects of being gassed in WWI. He developed an interest in land speculation and, in 1925, bought the land covered in gravel pits that lay between University and Steele and 1st Avenue to Cherry Creek. This area was also populated by servants to those at the nearby country club (often segregated minorities), junk men, and construction workers who lived in simple cinder block and frame hovels. The initial intent was to develop it into high-end housing for members of the country club, but the flood in 1933 turned this area along the creek into a disaster area. As such, he decided to allow the city to set up garbage dumps on the site.

It wasn't until the post-war period that Cherry Creek Dam was completed and alleviated the threat of catastrophic flooding. In 1946, Buell announced his intention to construct the Coloden Moor Shopping Center. This would be the 2nd major shopping center in the city, but he would first have to fight for several years over zoning issues and a proposed highway project that would have followed Cherry Creek. Ground was broken in 1950 and included only 9 acres for a Denver Dry (later known as Foley’s) and 17 other shops. He originally planned for the eastern part of the property to be developed into 750 apartment units. Denver Dry opened in 1953 and the rest of the shopping center was completed in 1955.

By 1957, the plan for apartments was discarded and the shopping center began expanding eastward in a disorganized, pell mell manner. There was no overriding architectural theme or style in the continued development. This went on through the 1960s, as did further development of Cherry Creek North. In 1968, Buell may have let his ambition get the better of him when he proposed a 54 story skyscraper in the heart of the shopping center. Neighbors and nearby communities were outraged by the threats to the mountain view and later ordinances put limits on the height of any future Cherry Creek buildings. 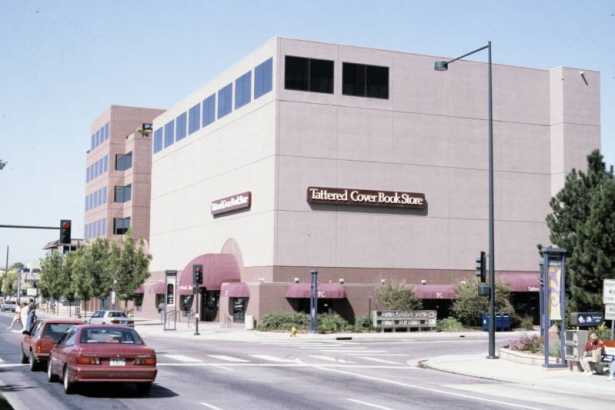 Joyce Meskis moved from Chicago to Denver in 1962. After working in a bookstore in Englewood and volunteering at the Littleton Public Library, she decided to try her hand at running her own bookstore. Her first attempt was a shop in Parker that opened in the early 1970s, but failed to gain much traction. In 1974, however, she found out about a bookstore in Cherry Creek that was for sale. It had been founded by Steve Cogil in 1971 and carried the name, “Tattered Cover”. Her experience with the book-buying public served her well and she quickly started expanding the store.

By the early 1980s, it was still at its 2823 2nd Ave location, but had expanded to 6,000 square feet. It had already become known as one of the premier independent book stores in the country and, by 1983, moved to 2930 2nd Ave while maintaining the first property as the bargain book outlet for the store. By 1986, the store moved yet again to the northwest corner of 1st Ave and Milwaukee. This final Cherry Creek location encompassed 50,000 square feet and continued to be a jewel of the neighborhood and the larger Denver community. In 2006, however, a dispute with her landlord (not helped by the additional strain of the new paid street parking) led Joyce to relocate the flagship store to its current location at Colfax and Elizabeth at the old Bonfils Theatre.

From tribal peoples predating the Cheyenne and Arapahoe to Confederate soldiers to farmers, to “bums and bummers”, to segregated servants of the ruling class, to the nouveau riche, Cherry Creek has been a microcosm of the larger Colorado story over the years. Hopefully, over time, more people will become aware of the rich history of the area that is often obscured by the current commercial aura of the district.

Bibliography:
Cherry Creek then ... [map].
Harman and its people : a project of the Harman Neighborhood Reunion Group
Harmon to Cherry Creek : a historical view / compiled by Barbara Barron Bellomo, 1997-2007.
History of the city of Denver, Arapahoe County, and Colorado by W.B. Vickers
History of the Old Harman Town Hall/Lawrence N. Greenleaf Masonic Temple
Proposed Cherry Creek neighborhood plan : as approved by the Denver Planning Board
Thayer's map of Denver, Colorado / H.L. Thayer. 1874
The ghosts of Denver : Capitol Hill
The origin of certain place names in the United States / by Henry Gannett
The Town of Harman and the Harman-Bromwell Elementary School : a Bicentennial reunion