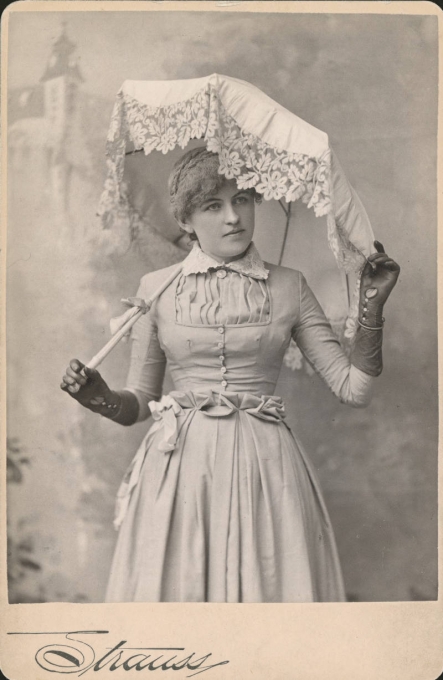 To brother Charlie from Nell

Adventurous newspaper writer, gossip columnist, and social activist who became one of the first women to run her own newspaper.

From Mississippi to Mexico

Leonel Ross Campbell was born in 1857 to a wealthy Mississippi family. She went by her nickname, Nell, in everyday life.

Like many children from rich Southern families, Nell was sent to boarding school in St. Louis, Missouri. However, her education was cut short when she eloped at age fifteen. Her husband was George Anthony, a wealthy railroad industrialist.

Nell and George moved to Mexico, since he was in charge of the construction of the Mexico Central Railway.

Although she loved being in Mexico at first, after five years Nell got bored of her much older husband. George was more interested in business than adventure, and Nell left him when she was twenty years old to move to New York City. She hoped living in such a big city would give her the exciting life she wanted.

In New York, Nell tracked down the editor of The New York World - one of the biggest newspapers in the country. The editor was a friend of Nell's father, and she asked him for a job as a reporter.

The editor did not take her seriously, but gave her a small assignment since she would not leave him alone. Nell's first article was on a fire in the slums. Her article impressed the editor so much that he offered her a full-time reporting job.

Many authors and journalists at the time used a pen name instead of their real name. Nell's fellow writers at the New York World nicknamed her Polly Pry because she could pry information from unlikely sources. She decided to use Polly Pry as her pen name, and kept it for the rest of her life.

Nell's mother and father moved to Denver in the late 1890s. Nell's father had tuberculosis, and Denver had some of the best hospitals in the country to treat the disease. In 1898, Nell took a train from New York to Denver to visit them.

Nell loved meeting new people, and wasted no time starting a conversation with the man in the seat next to her on the train. They talked for hours, as Nell told him funny stories of her life and adventures, including her work as a reporter. The other passenger revealed his name was Frederick Bonfils, and he was one of the two owners of The Denver Post.

By the time the train pulled into Denver, Frederick Bonfils offered Nell a job as a reporter with his newspaper. Nell agreed.

One of Nell’s first stories for The Denver Post was an exposé of Colorado’s mental health system called ‘Our Insane Treatment of the Insane.’

Coloradans loved Nell's stories and her dramatic writing style. She soon became one of the Post's most popular writers. 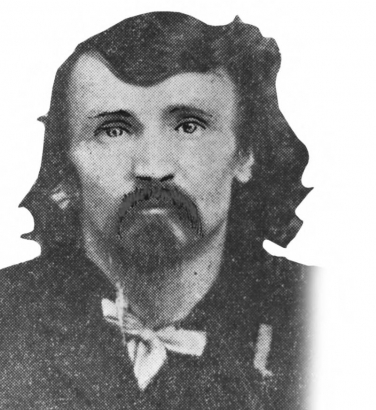 Polly Pry's most famous story was about the 'Colorado Cannibal,' Alferd Packer.

Nell originally met Packer in the Cañon City prison while researching a story about Colorado's prison system. Although Packer had avoided talking to reporters for years, Nell convinced him to give her an interview.

This interview led to a series of meetings between Nell and Packer, in which he shared his side of the story. He told her that his companions had died in the mountains, and that he had eaten them to keep from starving to death. But, he said, he had never murdered anyone.

Nell became convinced that Packer was innocent of murder. She argued that since sailors were legally allowed to eat people if they were lost at sea, the same rules should apply to people stranded in the mountains.

Nell told her idea to Frederick Bonfils and H.H. Tammen, the owners of The Denver Post. They agreed to hire a lawyer to help clear Packer's name - partly because Polly Pry's stories about Packer had gotten many new people to start reading the Post! They knew a court case would help sell even more newspapers.

Nell was successful. Alferd Packer was released, but was told he could not leave the state of Colorado ever again. He moved near Littleton, Colorado, and lived the rest of his life as a vegetarian. 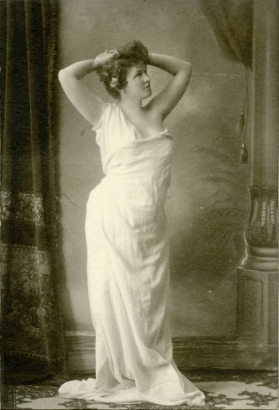 ca.1900.
Polly Pry posed for this photograph which was considered very scandalous for the time. Would it still be thought of that way today?

After Alferd Packer's pardon, Nell found herself making headlines instead of writing them. Nell and her bosses discovered that the attorney hired by The Denver Post took payment from Alferd Packer as well as from the Post.

Frederick Bonfils and H.H. Tammen called the lawyer into their offices at The Denver Post. Nell and her bosses confronted him about taking double payment, and demanded he return Packer's money.

The attorney became so angry that he pulled out a gun and shot both Bonfils and Tammen. When he turned to shoot Tammen again, Nell jumped in front of him and shielded her boss with her body.

The gunman told her to move or she would be shot as well. Nell dared him to do so. She was the most popular writer in Colorado, and she told him he would get the death penalty if he hurt her.

Nell stalled the attacker long enough for the police to arrive, and managed to stop the bleeding of her bosses by using her dress.

Rumors circulated about Nell catching bullets in her hoop skirts and tearing the gun out of the would-be murderer's hands. While untrue, these stories made Nell a bigger legend than ever.

Nell continued to write incredibly popular stories in her signature sob sister style. Not everyone cared for her approach, however, and she made many enemies.

Despite having possibly saved their lives, Bonfils and Tammen fired Nell from The Denver Post after she wrote a series of articles exposing corruption in labor unions. The Post and its owners were strongly pro-union and were unimpressed with Nell's stories.

Nell decided to start her own newspaper, which she called the Polly Pry, knowing people would buy a newspaper based on her pen name alone.

The Polly Pry was a combination of gossip column, tabloid magazine, and serious writing. Rumors about celebrities were published alongside investigative journalism pieces.

After running the Polly Pry for almost three years, Nell discovered how dangerous some of her writing could be. Late one night, she had a knock on her door. On the other side was a man who was so enraged by Nell's articles that he tried to shoot her. Nell used the door as a barrier between herself and the bullets, and the man ran away before the police arrived.

Nell told the public she wouldn't let what happened keep her from publishing her newspaper. But, at the end of 1904, Nell sold the Polly Pry and returned to New York. 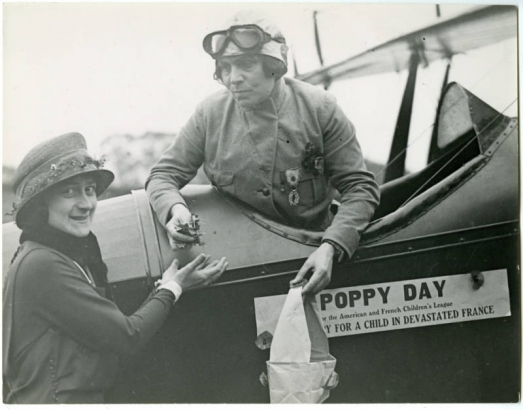 Nell missed Denver, and was happy to come back when the Denver Times offered her a position as a reporter. Although she was now well past middle age, she accepted a job to go to Mexico and interview Pancho Villa, who had overthrown the Mexican government.

Villa refused to talk to American reporters, and threatened to have Nell killed when she asked for an interview. Nell responded to his threats by telling jokes until Pancho Villa changed his mind.

After this, Polly Pry returned to journalism full-time, and covered World War I in Europe even though she was well into her sixties.

Nell stayed active throughout her life, and only slowed down once she started having heart problems at age eighty-one. Her last words were as she was trying to leave her hospital bed against the nurses' wishes - "I must be up, and..." She passed away before she could finish her sentence.

Polly Pry was not only a beloved Colorado celebrity, she paved the way for women writers throughout the country. Although she sometimes faced prejudice because she was a woman, her strong personality and excellent writing won people over. Investigative reporters around the world were inspired by her writing and dedication to getting stories no one else could.

elope – to run away and get married secretly

industrialist – a person in charge of a manufacturing company

canal – an artificial waterway that allows ships to travel where land once was, usually used as a shortcut

exclusive – a story published by only one source

pen name – a name used instead of a writer’s real name. These were especially popular with women in the 1800s and 1900s, since writing was considered unladylike.

exposé – a journalistic report that reveals something scandalous

sob sister – a writing style that Polly Pry made popular, it involves telling stories that appeal to people’s emotions

women’s suffrage – A movement to allow women to vote. Women got the right to vote in the United States in 1920.

prejudice – opinions that are based on a person’s gender, race, or religion instead of experience with the person

What are some of the reasons a person would want to use a pen name instead of their real name?

If you had a pen name, what would it be? Why?

Do you have a favorite journalist? What do you like about them?

Imagine you were going to write an exposé on something in your neighborhood (check the word bank for the definition!). What would you write about? How would you get information?

Polly Pry Manuscript Collection (Primary sources including photographs, articles, letters, and personal items belonging to Polly Pry. The Polly Pry collection can be seen in person on the 5th floor of the DPL Central Branch)

Biography Clipping Files (Newspaper articles, journal articles, and obituaries of Polly Pry that can be seen in person on the 5th floor of the DPL Central Branch)

Polly Pry wrote for the Denver Post, The Denver Times, and founded her own newspaper, the Polly Pry.

Books about Polly Pry at the Denver Public Library:

What a woman Leonel/"Nell"/Polly Pry was! She was a great campaigner for Madame Guérin and her Inter-Allied Poppy Days in 1920 and 1921. It is indeed Madame Guérin sitting in the plane, handing Polly Pry a poppy.