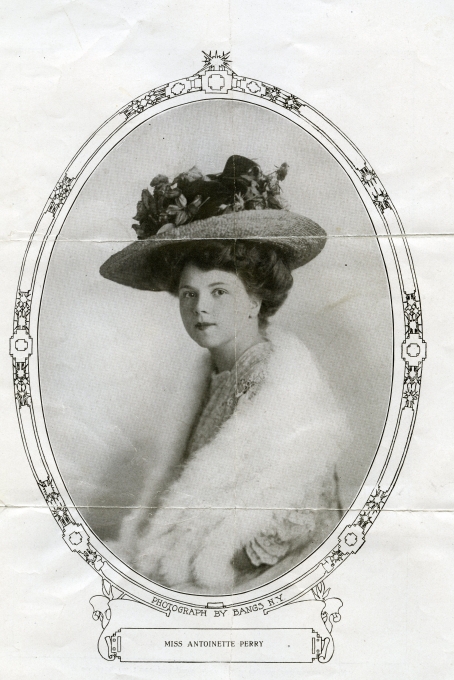 Mary Antoinette was an actress, director, producer, humanitarian, and an activist, whose work on Broadway inspired the creation of the Tony Awards. 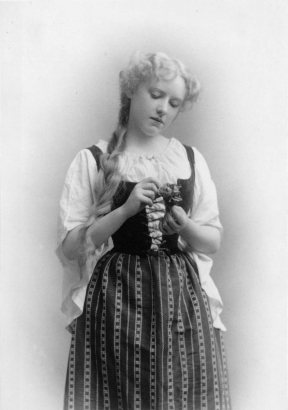 Mary Antoinette was born on June 27, 1888, in Denver, Colorado. She was Minnie and William R. Perry’s only daughter. Her family owned the oldest ranch in South Park, Colorado, which was called the Salt Works Ranch. Mary came from a family of Colorado pioneers, and her grandpa was Colorado senator Charles L. Hall. Mary’s aunt Mildred was an actress and introduced her to acting. Mary Antoinette was trained to be a singer as a little girl, but she liked to put on plays with her friends instead. While Mary Antoinette Perry had such a long name, she liked to go by Tony, which was a shortened version of Antoinette.

When Tony was 15, she went to Pueblo to appear as a stock actress with her uncle’s touring company. In 1905, she made her debut to theater in Mrs.Temple’s Telegram at the Power’s Theater in Chicago. Later that year, she played the ingenue in Lady Jim at the Weber’s Theater in New York. In 1907, Tony was cast as the leading lady in David Belasco’s A Grand Army Man. It was clear she that was on a path to being involved in theater for the rest of her life.

Tony was a young star

Tony then went on to play a leading role in The Music Master at the Bijou Theater. The show eventually came to the historic Elitch Theater in Denver, where it was a smash hit. Frank Freauff brought his friends to the show to watch Tony for several nights. In 1909, Tony married Frank Freauff, the president of the Denver Gas and Electric Company. Tony then decided to retire from acting so she could start a family. Tony had three daughters with her husband, but one of her daughters died as an infant. Her daughters, Margaret Hall and Elaine Storr, later went on to follow their mother's footsteps in acting and directing.

Tony Comes Back to the Theater

After Tony’s husband passed away from a heart attack in 1922, she decided to come back to what she loved. She had received her husband’s blessing and was able to use his wealth to invest in her career. She went back to acting in 1924 in the role of Zona Gale in Mr. Pitt. In 1928, she made her debut as a director with her partner, producer Brock Pemberton. They had a huge success when the comedy, Strictly Dishonorable, opened in 1929. The success of the show helped Tony offset the financial problems that she had due to the Great Depression.

Tony’s role as a female director was controversial at the time, but she went on to direct seventeen Broadway plays in the next 14 years. With Brock Pemberton, Tony produced her Broadway hit, Harvey, in 1944. Harvey was a Pulitzer Prize winning comedy written by Mary Chase. The play lasted on Broadway for seven years. Tony then served as the chairman of the American Theatre Council’s Committee of the Apprentice Theater from 1937 to 1939. 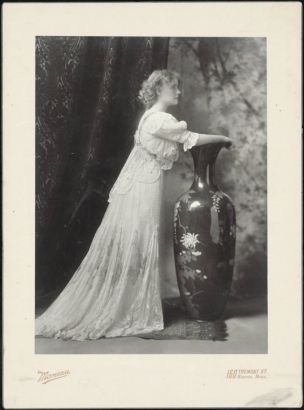 The United States joined the war front after the Japanese staged a surprise attack at Pearl Harbor in 1941. During WWII, Tony formed the American Theater Wing War Service. The service created fundraisers for the war. Tony also worked with Stage Door Canteens, which was an organization that helped soldiers who felt homesick. She also worked on the Theatrical War-Service organization. Tony hoped to bring some light to the war by putting on performances for wounded soldiers at the hospital. She worked to bring Broadway performances to troops who were stationed overseas. When veterans returned from the war, Tony worked on opening a drama school for veterans under the newly formed GI Bill of Rights. 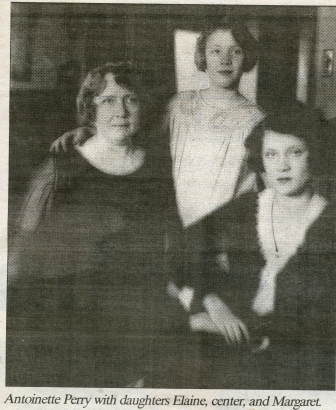 Tony with her daughters

In 1945, Tony started to develop heart problems, but she refused to see a doctor. On June 28, 1946, Mary Antoinette Perry-Frueauff died from a heart attack at her home in New York. She was only 58 years old. She was buried in the Bronx, New York. 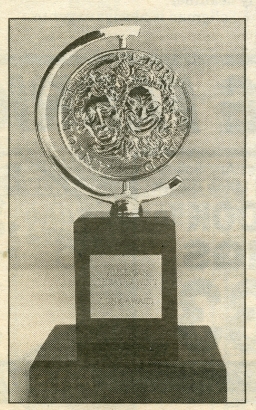 The Tony Awards started in 1947, a year after Tony died. Brock Pemberton had suggested the idea of giving awards in her honor. They were officially known as the Antoinette Perry Awards, but the name was shortened to the Tony Awards. The awards were given based off of merit for accomplishments on the New York stage. The first awards included money clips, silver compacts, and even scrolls. In 1949, the Tony Awards created a medallion that had a mask of comedy and tragedy on one side and a profile of Tony on the other side. The awards were named in her honor, due to the fact that Tony had promoted and helped so many young people get involved in theater. 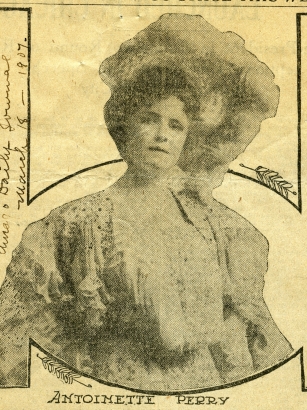 In 2004, Mary Antoinette Perry-Frueauff was inducted into the Colorado Women’s Hall of Fame. Tony had been successful in breaking down barriers to get women into the world of directing. She encouraged young talent and was in charge of 7,000 auditions for young people. She believed in investing in young talent. She worked on using theater to boost morale during WWII and did her best to help with the cause. The Tony Awards are now televised annually in her honor.

Humanitarian - Someone who is concerned with the well-being of others and works to help them.

Activist - Someone who believes in and fights for political or social change.

Pioneer - Someone who is the first to do something or to develop something.

Stock actor - An actor who usually plays more than one character.

Ingenue - A very innocent young woman that is usually seen as a role in plays or films.

Controversial - something that inspires public debate and differing opinions

The Great Depression - This started in 1929 when the stock market crashed and went into the 1930s. It was when the world suffered a long drastic economic downturn. People struggled to find work and to feed their families during the Depression.

Pearl Harbor - This event was when the Japanese launched a surprise attack on the American base at Pearl Harbor. This ultimately led to America declaring war on Japan and entered the United States into WWII.

Stationed - to be located at

GI Bill of Rights - This law that was passed in 1944. It gave U.S. soldiers who had served in World War II many benefits such as college scholarships and home loans.

Merit - worthy or deserving recognition of

Morale - to bring confidence, the right teachings, or the right morals 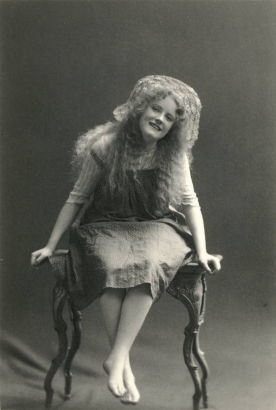 What is something that you would pioneer? Why?

Why do you think it was so important for Tony to help out with the war cause?

What kind of things do you think they should give awards for today?

What challenges do you think Tony faced as a female director?

More on Mary Antoinette Perry-Frueauff
At the Denver Public Library

Antoinette Perry Papers ( Newspaper clippings, pictures and a letter from the life of Antoinette Perry. This can be viewed in person at the Denver Public Library Western History and Genealogy Department.)

Another article on Tony from the Colorado Virtual Library

Tony’s article in the Colorado Women’s Hall of Fame

Papers from the Hall family, which Tony was related to from her maternal side.

An article on Tony from the history of the Tony Awards

An article on Tony from Playbill

Early Life and Career
Tony Gets Married
Tony Comes Back to the Theater
Tony at War
Death
The Tony Awards
Legacy
Word Bank
Get Thinking!
More on Mary Antoinette Perry-Frueauff