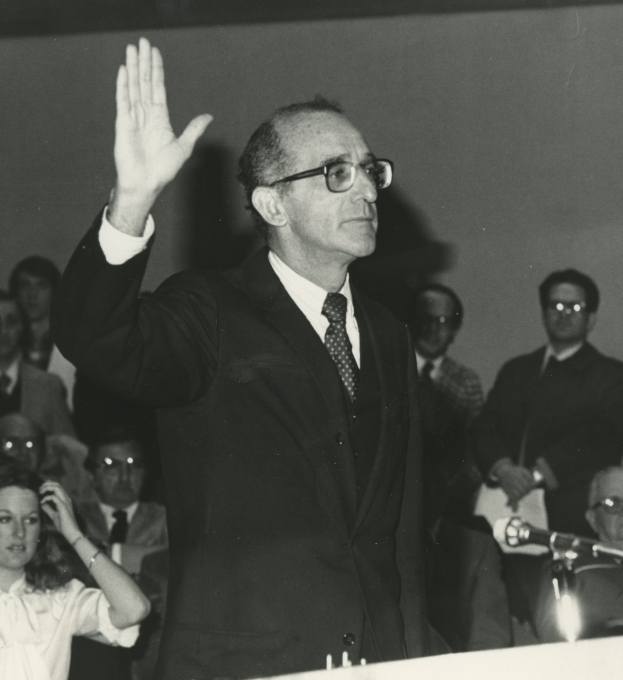 Judge who worked to modernize the Colorado courts, and was the United States' first ever Hispanic chief justice. Luis Rovira is best remembered for declaring discrimination against gay people unconstitutional.

Luis Dario Rovira was born on September 8, 1923 in San Juan, Puerto Rico. He was the youngest of two children. His mother, Mae, was from Pennsylvania, while his father, Pedro, had lived in San Juan all his life. They met while Pedro was attending school in Philadelphia, and Mae moved to Puerto Rico with Pedro after their marriage in 1913.

When Luis was four years old, his parents divorced. Mae took Luis and his older sister with her to Philadelphia, while Pedro stayed in San Juan. His parents remained close friends after their divorce, and Luis traveled between Philadelphia and Puerto Rico often.

In Pennsylvania, Luis became an active member of his local boy scout troop. He loved hiking and camping in the wilderness. After a family trip to Colorado, Luis decided he wanted to move there when he was older, so he could be outdoors as often as he wanted.

Luis was also very interested in politics and government. He was an active member of many school groups and activities. When he was twelve, Luis told his family he was going to be a lawyer.

Luis was very dedicated to this dream. Starting in middle school, he took jobs unloading boxes in industrial areas to earn the money he would need to go to college and law school. He worked all through middle and high school to save money.

When Luis was in high school, his mother moved to the town of Rutherford, New Jersey to live with her brother. At Rutherford High School, Luis was a member of the track team and the student council. He continued to work odd jobs for school money, all while earning the excellent grades he would need to go to law school.

By the time Luis was a senior in college, he had his future fully planned out. He would attend the University of Colorado in Boulder, to have a chance to live in the state he loved. He would then work as hard as he could in college to make sure that he would be able to to go to law school right after.

Luis left for Boulder in the summer of 1942, excited to make his dreams of many years a reality. 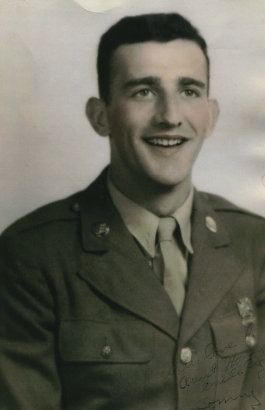 When Luis arrived in Colorado, however, he began to have second thoughts. He was nineteen, the age of many young men who were fighting in World War II. Luis had two choices: start college and wait to be drafted, or volunteer to fight. He thought it was important to help protect the United States by fighting in the war.

So instead of enrolling at the University of Colorado, Luis enlisted in the United States Army in Denver. He became a member of the 102nd Infantry Division, and was sent to fight in the Netherlands and France. While fighting the Nazis, Luis saw many horrible war crimes committed against Jewish people. This experience stayed with him for the rest of his life. He did not want to see anyone hurt because of their race or background.

After the end of World War II, Luis stayed with the US Army for an additional year to help with the occupation of Germany. Luis then returned to Colorado and his dreams of becoming an attorney.

Luis and the Law

The G.I. Bill allowed Luis to attend college for free in return for fighting in World War II. Luis was very happy about this, as this meant he had more money saved to attend law school in the future. Luis majored in political science, and played for the CU Buffaloes football team. Luis was very well-liked, and was elected student body president for the University of Colorado his senior year.

Luis applied for and was accepted to the law school at the University of Colorado. He began law school immediately after his college graduation.

While in law school, Luis began training to become a JAG, or member of the Judge Advocate's General Corps. These were the people who were responsible for the justice system within the military. Although Luis never worked as a JAG full time, he was a reserve member for much of his life.

In the 1940s and 1950s, law students were allowed to take clients if they were supervised by a licensed attorney. Luis took his first case defending a black student at the University of Colorado who was banned from a barber shop because of his race.

Due to the racism of the time, Luis lost the case; the jury did not think there was anything wrong with denying a black man service. Luis did not let losing the case defeat him, though.

He organized students around Boulder to boycott the barber shop. The business began losing so much money that they reversed their policy and allowed people of all races to use the barber shop.

Luis always tried to use his position as a lawyer to make sure that all people were treated equally.

After Luis graduated from law school, he moved to Denver to begin working as an attorney full time. He worked in many different types of law to learn as much as he could. He was one of eleven attorneys appointed to defend seven accused Colorado communists during the Red Scare. Luis represented the accused Communists pro bono, meaning for free.  He believed everyone should be protected equally under the law, regardless of political beliefs.

He later started his own company, where he specialized in environmental law.

Luis was well respected by other attorneys for his intelligence and kindness. He was twice elected as the president of the Denver Bar Association - the group that oversees all lawyers in Denver. Luis was one of the Denver Bar Association's most popular presidents. He helped attorneys who came to him with difficult ethical questions, and made sure all lawyers were working legally and fairly.

In 1976, Luis was appointed as a judge in the District Court. He oversaw many criminal and civil cases. He soon had a reputation for being extremely intelligent and extremely fair. Even people he sent to jail did not have anything bad to say about him, because they knew he was always as fair as possible.

In 1979, Luis answered the phone in his courtroom. He was surprised to find that the call was from Colorado governor Richard Lamm. Richard Lamm told Luis that a member of Colorado's Supreme Court had just retired. The governor had chosen Luis to fill the empty seat.

Luis was excited and surprised to be nominated to the Colorado Supreme Court. Luis was a Republican, while the governor was a Democrat. Governors usually chose someone from their own political party to fill Supreme Court appointments. Luis was so good at being a judge that the governor chose him over someone from his own party, which was very rare. 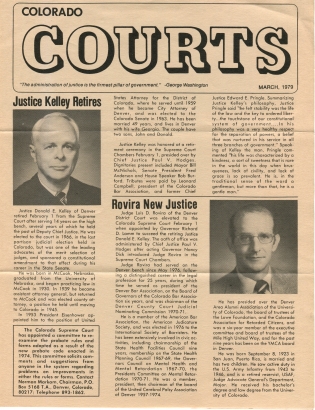 In the Colorado Supreme Court, Luis continued the work that made him so respected as an attorney and judge. He helped modernize the courts by bringing in new technologies. He helped bring in DNA evidence, so there was less chance of the wrong person being accused of a crime. In 1990, the Chief Justice of the Colorado Supreme Court retired. Luis was unanimously elected by the other judges to take his place as the new Chief Justice. This made him the first Hispanic Chief Justice of any state supreme court. Luis served as Chief Justice until his retirement.

In the 1990s, Luis had one of his most famous and controversial cases.

Amendment 2, a measure that would repeal any laws in Colorado prohibiting discrimination against gays and lesbians, was passed by voters in 1992. 53% of Coloradans voted to remove legal protections for gays and lesbians. This made many people unhappy, angry, and afraid.

Lawyers argued that Amendment 2 was unconstitutional. Luis agreed with them. He had always tried to ensure that people were treated equally. In January of 1993, Luis and the state court passed an emergency measure that would keep Amendment 2 from taking effect. In July of 1993, the case went to the Colorado Supreme Court for an official ruling.

But the people who created Amendment 2 were angry at this opinion. They appealed the case to the United States Supreme Court. Once a case is decided by the US Supreme Court, it becomes law. Luis worried that the Supreme Court might not see anything wrong with Amendment 2.

In 1995, the case went to the US Supreme Court. In the summer of 1996, the judges handed down their final ruling: Amendment 2 was a violation of the rights that gays and lesbians were guaranteed under the constitution. This ruling made it illegal for anyone in any state to deny gays and lesbians equal protection.

Luis was always very proud of his role to make sure that everyone, regardless of their romantic preference, was protected by the law. 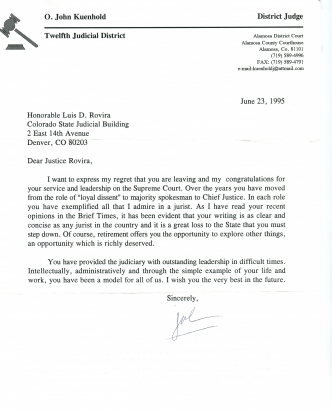 In Colorado, judges are forced to retire at the age of 72. Luis loved working as a judge in the Colorado Supreme Court, but in 1995 he reached mandatory retirement age and was forced to leave his position.

Luis loved to keep himself busy. He remained a member of the Denver Bar Association, and gave advice and help to many lawyers and judges. He was active with the University of Colorado School of Law, and helped train law students to make fair and ethical decisions. He also was an important advocate for mental health, and was a member of many mental health groups.

In 2011, Luis was honored by the Denver Bar Association as a "legal legend." He died later that year at the age of 88.

Luis is remembered for his intelligence, fairness, and dedication to making sure all Coloradans were treated equally.

Luis' widow, Lois Rovira, created the Rovira Scholar fund. The Rovira Scholar is a recent law school graduate who lives in Denver, and is tasked with creating a program to provide free or low cost legal services to those who cannot afford them.

industrial – related to factories and production

G.I. Bill – a law passed in 1944 that allowed former soldiers to receive benefits such as home loans and education scholarships in return for fighting

boycott – to stop visiting a business or buying a product

advocate – a person who publicly supports a particular cause

Do you think Amendment 2 would pass in Colorado today? Why or why not?

How did Luis Rovira help make life more equal for all Coloradans? Look in the text for clues.

If you were a judge, how would you approach cases of discrimination?

Luis Rovira Manuscript Collection (WH2263): Primary sources related to Luis Rovira's life and work, including letters, photographs, newspaper clippings, and DVDs of some of his most famous cases. The Luis Rovira collection can be viewed in person on the 5th floor of the Denver Central Library.

Luis Rovira Clipping Files: Newspaper and journal articles about Luis Rovira. Clipping files can be viewed in person on the 5th floor of the Denver Central Library.