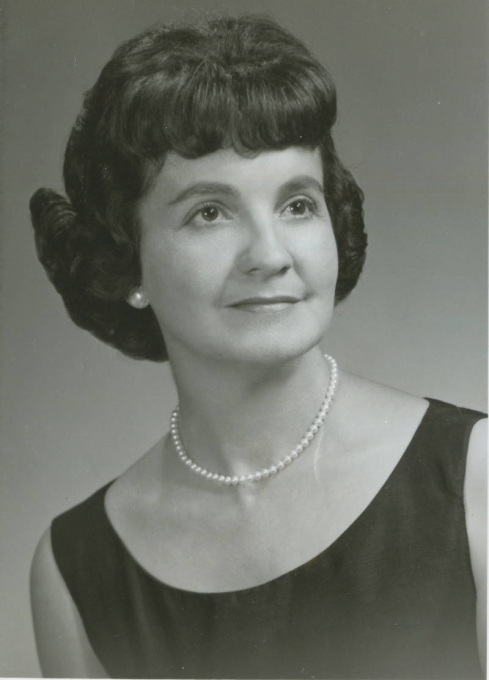 Lena Lovato was born July 25th, 1920 in the town of Clapham, New Mexico. Lena's father repaired shoes for a living, while her mother was a homemaker who looked after Lena and her sister.

Lena's family had been in New Mexico for over one hundred and fifty years. Lena grew up fluent in both English and Spanish, and was very proud of her New Mexican heritage. She loved to dance, and was skilled at performing many traditional Spanish and Mexican dances.

Lena was a strong student whose favorite subjects were languages and reading. Lena was never satisfied until she was at the top of her class. She was even valedictorian of her high school.

Although the Lovato family was very poor, Lena's excellent grades earned her a scholarship to Denver University. She majored in Spanish and Education. Lena wanted to become a Spanish teacher, and returned to New Mexico after her graduation in 1941 to work in elementary schools.

1942.
Diploma from the University of Denver.

When Lena was twenty-three, she married an electrician and maintenance man named Juan Archuleta. Lena took his name and went by Lena Archuleta after their marriage. Although the Archuletas never had children, they were both very interested in children's welfare.

In 1951, Juan accepted a position as maintenance supervisor for the Denver Public Schools.

Lena decided to return to school herself, and earned a masters degree in Library Science from Denver University.

After earning her masters degree, Lena held positions as Spanish teacher and school librarian in elementary and middle schools across Denver. Although she was offered positions at many wealthy schools, Lena preferred working with low-income students.

The Archuletas originally wanted to live in Denver's Harvey Park neighborhood, which was mostly white. They soon found no one would sell a Hispanic couple a home in a white neighborhood. Two Denver Public Schools principals helped the Archuletas find a home in the more welcoming Ruby Hill neighborhood.

In the early 1960s, Lena accepted a librarian position with the Denver Public Library. She was recognized as a talented leader, and soon became head of Community Relations for the Library.

Around the same time, Lena and her husband Juan began mentoring a young boy from Mexico. Although he learned English quickly, he had very little support from his family. His parents were migrant workers who often had to travel to and from Mexico. The boy's family was unable to take him to school, or help with homework in a language they did not understand.

Although Lena and Juan encouraged him to stay in school, the boy dropped out to get married as a teenager. This experience stayed with Lena - she realized that Spanish speaking students, especially those from immigrant families, had needs that were not being met by the Denver Public School system.

After this, Lena took a job as the supervisor for a bilingual education program in Denver. Lena wanted to bring more Spanish-language programs to early elementary school students, so Spanish speaking newcomers would not fall behind the rest of their English speaking classmates. She also wanted to bring better English as a Second Language (ESL) programs to schools, to help Spanish speakers adapt to life in the United States more easily. 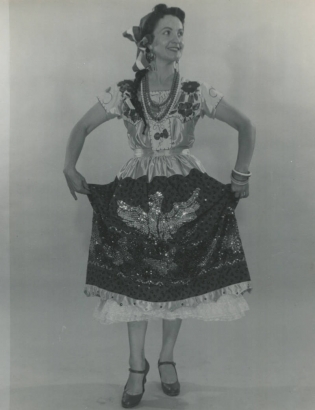 1954.
Lena Archuleta as a member of Ballet Espanol, Denver, Colo.

Lena decided to return to school a third time in the 1970s. She earned a certificate in school administration from the Graduate School of Education at Denver University.

After earning her certificate, Lena became principal of Fairview Elementary School in 1976. She was the first Hispanic woman to become a school principal in Denver.

It was a challenging job. The 1973 Supreme Court ruling that required integration through busing in Denver left Fairview with a wide range of students. In addition to Fairview's regular student population of African American and Hispanic students, children were bused from the white Bear Valley neighborhood, housing projects in downtown Denver, and several predominately Hispanic and Vietnamese neighborhoods.

Lena worked hard to make sure that all students at Fairview had the same opportunities. She helped close gaps in knowledge, and brought ESL classes to the school to help students learn English. She traveled throughout the city to meet with students and their families at home.

In 1979, both Lena and Juan decided to retire in order to spend more time together. 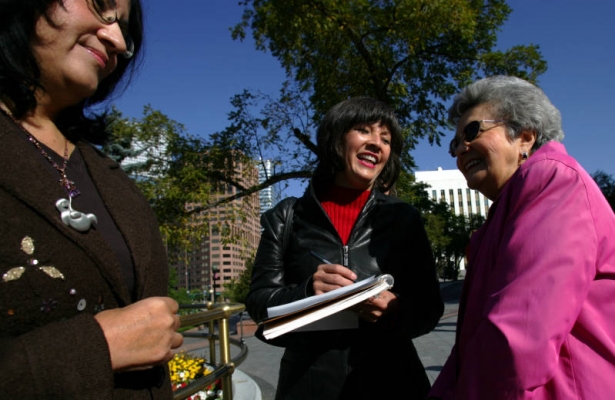 However, Lena was not happy to simply sit back and relax.

She was active in many groups that made life better for Hispanic Americans. In 1964, she helped create the Latin American Research and Service Agency (LARASA). LARASA helped people with job training, housing, and earning citizenship. Lena was active in LARASA throughout her life.

Lena was one of the "Founding Mothers" of the Mi Casa Resource Center. The Center helped Hispanic women earn better lives for themselves and their families through job training and business assistance. Lena helped many women become small business owners and entrepreneurs through Mi Casa.

Lena also stayed active in schools and libraries. She worked as a consultant for Denver Public Schools long after her retirement. She served as president of the Colorado Library Association, and helped bring more Spanish language books and Hispanic archival materials to the Denver Public Library.

She was a member of the Denver Landmark Preservation Commission, to help save old buildings from being destroyed.

As Lena grew older, she found herself interested in senior citizens' rights. She talked at the White House about the best ways to help seniors keep their independence. She founded a group to match teens with mentors in nursing homes to give both groups a healthy social life.

Lena L. Archuleta Elementary School, in the Montbello neighborhood, was dedicated in 2002, to thank Lena for her years of service to the Denver Public Schools.

In late 2010, Lena was diagnosed with Lou Gehrig's Disease, which eventually causes a person to become completely paralyzed. Lena checked into a nursing home.

In April of 2011, Lena felt herself getting worse. She asked a nurse to stop bringing her food and water, and to keep all visitors away. Lena died just two days later at the age of ninety.

Lena is remembered for her dedication to making Denver a better place for all people. She wanted all Denverites to feel included and to have the opportunity to succeed, regardless of where they came from.

welfare – the health and happiness of a group

migrant workers – a person who moves from place to place to find work, especially farm laborers who  may move throughout a region or country to harvest seasonal crops

Do you or your friends speak a language other than English at home? What language or languages?

How would schools in Colorado be different without Lena Archuleta?

Do you think it is important to teach classes in languages other than English? Why or why not?

Lena Archuleta Manuscript Collection (Photographs, videos, newspaper clippings, diaries, and scrapbooks by and about Lena Archuleta. The Lena Archuleta manuscript collection can be viewed in person on the 5th floor of the Denver Central Library).

Books by and about Lena Archuleta at the Denver Public Library:

Lena Archuleta in the Colorado Women's Hall of Fame

A Brief History of Latinas in Denver