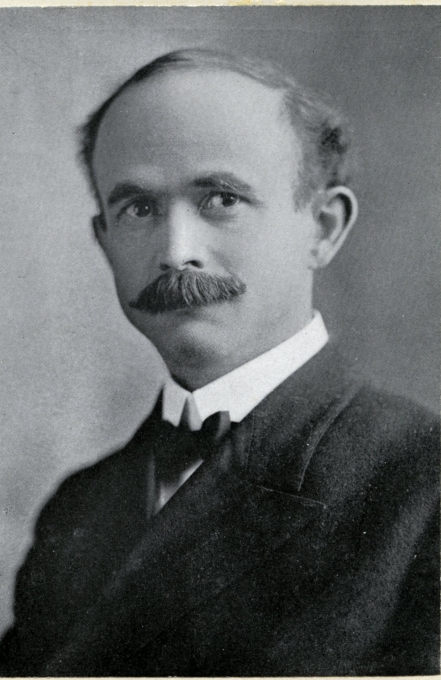 Judge Benjamin Barr Lindsey was known as the father of juvenile law. He established the first juvenile court in Denver, Colorado, and was known for his advocacy for juvenile rights, women’s rights and workers’ rights.

Ben Lindsey was born in Jackson, Tennessee, to Mr. and Mrs. Landy Lindsey on November 25, 1869. His father had been part of the Confederate Cavalry in the American Civil War. Ben was one of four children and grew up in the countryside on his grandparents’ plantation. He moved to Denver, Colorado, at age 11, when his father received a job as a telegraph operator. Ben attended public school and later attended a preparatory program at Notre Dame University. When Ben was 18, his father took his own life, leaving Ben and his brother to care for his mother and other siblings. Ben and his brother worked several jobs to provide for their family. Ben worked as a paperboy, in a real estate office, and was a janitor. All of these jobs stressed Ben out and pushed him away from his goal of becoming a lawyer.

Things got better for Ben when he found a job as a law clerk, and he became determined to fulfill his dream of becoming a lawyer. Ben accomplished this dream when he was admitted to the bar in 1894. Ben then formed a partnership with Fred Parks, and they had their own law firm for several years. The two lawyers went their separate ways in 1897 when Fred was elected to Colorado’s state legislature. Ben then looked toward politics when he became a member of the Democratic reform wing. 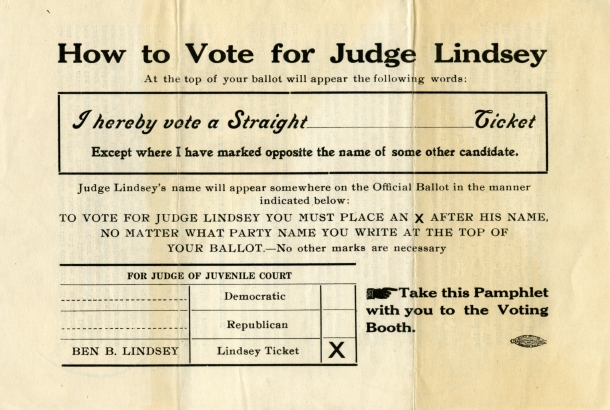 How to vote for Judge Lindsey

In 1901, Ben campaigned and was elected county judge. As a judge, Ben became concerned when he saw little boys going to jail for things like stealing a piece of coal off of a train track. Ben knew there had to be a better way to enforce law and order without sending kids to jail. There needed to be separate laws for adult defenders and for juvenile defenders. It didn't seem fair to Ben to have children and adults be treated the same. Judge Lindsey was then able to establish the First Juvenile Court in Denver. He presided as Denver’s judge for the juvenile court from 1907 to 1927. 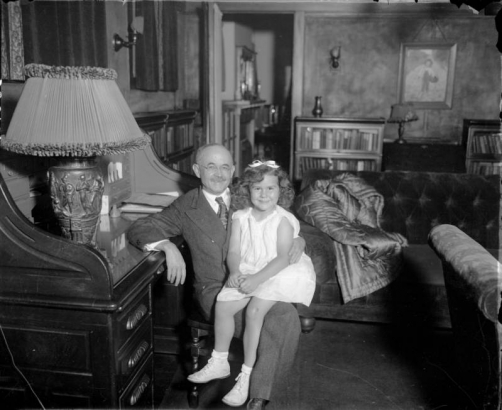 Ben believed he could rehabilitate children instead of sending them to prison. Ben could either put kids on probation, or send them to an Industrial School in Golden, Colorado. Ben believed in giving kids a second chance, and he wanted to hear from the kids themselves. Ben wanted to know the economic causes that caused kids to become criminal offenders and worked toward closing establishments that pushed kids into crime. He became known as the “Kid’s Judge” and gained the trust of many children. Ben believed in the power of education and worked toward having good public schools for kids. He also favored opening parks, persecuting parents who neglected their kids, creating parole officers for kids and enforcing school attendance laws.

Ben believed in workers' and kids' rights. This included things like enforcing an eight-hour work day for adults and protecting children’s earning rights. He wanted Workers’ Compensation and believed in safe working conditions. He was also a champion for women’s rights and fought for women’s suffrage. Ben believed that women had a choice when it came to using birth control. Ben fought against corruption in Denver as well, when he stated that it was unfair for people to purchase official government jobs. Ben believed people had to have the right requirements and educational background in order to work a certain job. 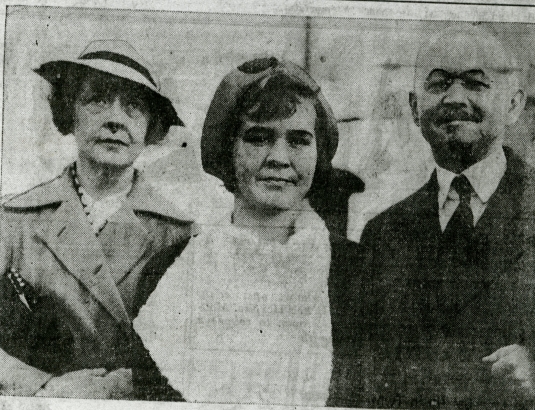 Ben married Henrietta Brevoort in 1913. Henrietta was from Detroit, Michigan, and had worked as an assistant probation officer. She supported her husband’s work on every step along the way. The Lindsey family was unable to have any kids of their own, but in 1926 they adopted a little girl named Benetta. 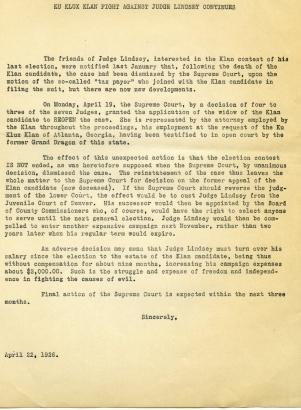 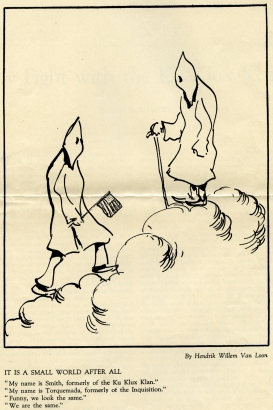 In 1924, Judge Lindsey was campaigning for re-election as juvenile judge against the Ku Klux Klan candidate. The Ku Klux Klan was a group that was prejudiced to certain races and had become strong in Denver by 1924. In 1924, Judge Lindsey was elected as juvenile judge again against the Klan’s choice of Royal S. Graham. The Klan contested the win and claimed that the judge had cheated, even when there was no evidence that this had happened. Around this time Judge Lindsey had also accepted a gift for his work on an inheritance case in New York, which had violated his role as a judge. Judge Lindsay could not accept payment on a case while he was serving as a judge. All of these factors led to Judge Lindsay being disbarred from the Colorado Supreme Court in 1929.

Lindsey becomes a Judge in Califonia 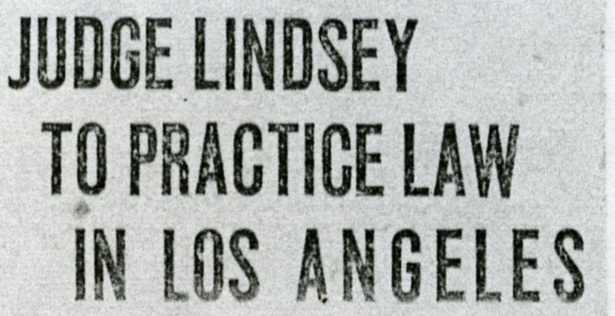 Ben and his family moved to California in 1931 after the controversy that had happened in Colorado. He continued his work there on children’s rights and was elected to the Los Angeles Superior Court in 1934. In 1935, Judge Lindsey was allowed back into the Colorado Bar Association. In 1940, Judge Lindsey was re-elected to the Los Angeles Superior Court. Judge Lindsey had been able to establish the Children’s Court of Conciliation and he reformed the California statutes governing treatment of the insane.

On March 26, 1943,  Ben passed away from a heart attack. He was cremated and some of his ashes were scattered around the Juvenile Court in Denver. It was said that he died from a broken heart when he wasn’t considered as a judge for a three-judge juvenile court in California. 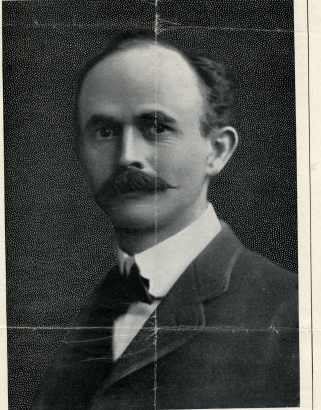 Ben was progressive for his time. He was a writer, a lecturer and a judge. He was friends with Theodore Roosevelt, and he always fought for what he believed was right. He had been criticized for his work on The Companionate Marriage and on The Beast and the Jungle, but he had written several other books and believed in reform. Today, we can thank Judge Lindsey for his work on juvenile law and his commitment to helping children live a better life. In 1943, a bronze bust of Judge Lindsey was presented at Denver’s Juvenile Court in honor of the work and legacy of Judge Benjamin Barr Lindsey.

Advocacy - a person who publicly supports a particular group or policy

Confederate Cavalry - Military Forces who fought on the side of the Confederacy during the American Civil War. They predominantly fought on horseback.

Civil War - a war fought against two sides in one country. In the American Civil War, the Unionists fought against the Confederacy over the issue of slavery from 1861 to 1865.

Plantation -  a farm that specializes in growing crops like cotton, coffee and tobacco

Rehabilitate - to restore, or to recondition

Probation - to put an offender under supervision, instead of putting them in jail

Industrial - related to factories and production

Workers’ Compensation - payment for employees who are injured or sick on the job.

Contest - to oppose, to conflict

Inherit - to receive something from someone who has passed away

Disbarred - to lose your license to practice law legally.

Corruption - When there is fraud, or dishonesty in someone, or a group that is usually in power

Statue - a written law that is part of legislature, which declares and enacts laws

Prejudice - opinions that are based on a person’s gender, race, or religion instead of experience with the person

Women’s suffrage - A movement to allow women to vote. Women got the right to vote in the United States in 1920.

Reform - to make changes in hopes of improvement

Do you think it was fair to take away Judge Barr’s license? What would you have done in that situation?

Why was Judge Barr so controversial in his time? Do you think he did the right thing by standing up for what he believes in? Do you stand up for what you believe in? If so, what happened?

What kind of things are happening in your world right now that you want to stand up for? Why? How about your country? Your state? Your neighborhood?

Are there solutions to the problems that we are currently facing?

If not, why do you think that way?

Books on Benjamin Barr Lindsey at the Denver Public Library

Benjamin Barr Lindsey in the Online Archive of California

Benjamin Barr Lindsey in The Library of Congress