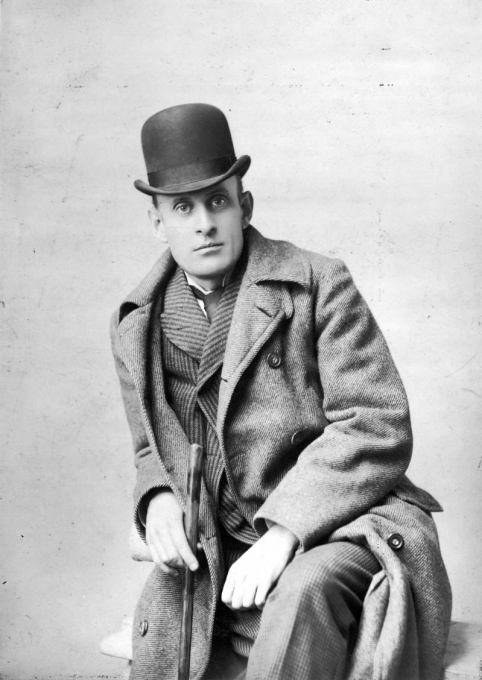 Poet, newspaper writer, and humorist whose poetry for and about children is still widely read today.

Roswell Field was best known as the attorney for Dred Scott in the Dred Scott Case. He argued for the rights of African Americans to earn United States citizenship.

Eugene was mostly raised by his mother, as his father was very busy. However, Eugene's mother passed away when he was only six years old. Eugene's father did not have time to take care of the children, so Eugene and his brothers were sent to Amherst, Massachusetts to live with an aunt. 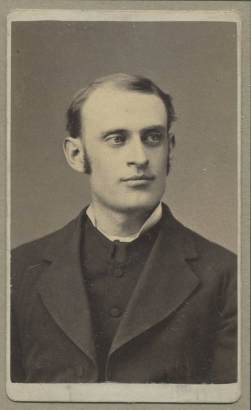 Eugene was a notoriously poor student who barely graduated high school. He was able to get into Williams College in Massachusetts based mostly on family connections.

Eugene was at Williams College for only a year, as he dropped out in 1868 to return to Missouri. His father was very sick, and Eugene stayed in St. Louis until his father passed away in 1869.

Eugene inherited quite a bit of money from his father, but was not allowed to have any of it until he turned twenty-one.

Later that year, nineteen-year-old Eugene enrolled at Knox University in Illinois. He was expelled from Knox after a practical joke went wrong.

Eugene returned to Missouri for his last two years of college. He enrolled at the University of Missouri in Columbia where his brother Roswell Jr. was a student. Eugene studied Journalism, but was much better known for his outrageous pranks than his academics.

Although Eugene attended three colleges, he never earned a diploma. Eugene hated mathematics and failed his required math courses at the University of Missouri, which kept him from graduating.

Eugene was able to use his inheritance after his senior year of college, so he decided to travel to Europe rather than go back to school and try to graduate. He and his good friend Edgar Comstock traveled for six months, until Eugene realized he had spent his entire (large) inheritance in less than a year! 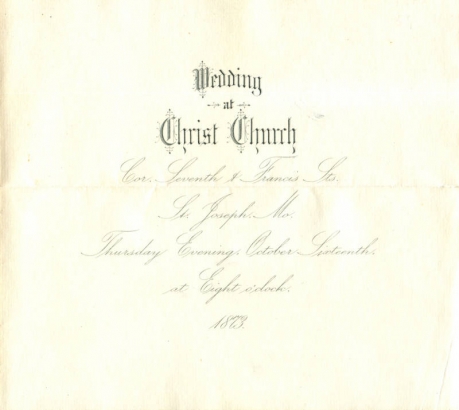 October 17, 1873
Invitation to wedding of Eugene Field and Julia Comstock.

Back in Missouri, Eugene took a job writing for the St. Louis Evening Journal. He spent quite a bit of time with Edgar Comstock and his family in St. Louis. Eugene soon fell in love with Edgar's fourteen-year-old sister, Julia.

Julia's father would not let her get married before she turned eighteen, so Eugene dedicated himself to his work at the St. Louis Evening Journal while he waited.

He was promoted to editor in only six months. He spent the rest of his time trying to convince Julia's father to let them get married earlier.

Two years later, he was successful. In 1873, twenty-three-year-old Eugene and sixteen-year-old Julia were married.

They had a very happy marriage, and their family grew to include eight children. Eugene prided himself on being an excellent father, and his children were the inspiration for many of his poems. 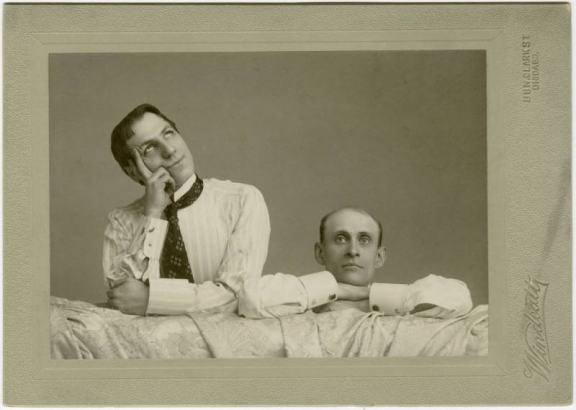 Francis Wilson, a famous actor of the 1880s (left) and Eugene Field (right)

Eugene's popularity as a writer led to many job offers.

Both columns satirized daily life in early Denver. For instance, Eugene poked fun at the city's Wild West atmosphere in an article warning little girls about the dangers of chewing tobacco daily.

Eugene was known throughout Denver for his practical jokes. His office at the Denver Tribune included a chair with a false bottom. An unsuspecting person would attempt to sit in the chair and fall to the floor instead.

In the 1880s, Denver was a popular place to rest for a few days when traveling between the East and West Coast. Because of this, Eugene became friends with the many important people who stopped in Denver. Famous writers, actors, and artists were among Eugene's personal friends, and they helped promote Eugene's writing.

Eugene used his growing fame to publish his first two books while in Denver. His first collection of poems was called The Tribune Primer. While only a few copies were published, the Tribune Primer circulated throughout the country. Eugene's second work, A Little Book of Western Verse, contained poems as well as articles from his newspaper column "The Current Gossip."

These two books made Eugene a literary celebrity. He received many job offers to write for newspapers throughout the country.

In 1883, Eugene decided to take a job writing for the Chicago Morning News. 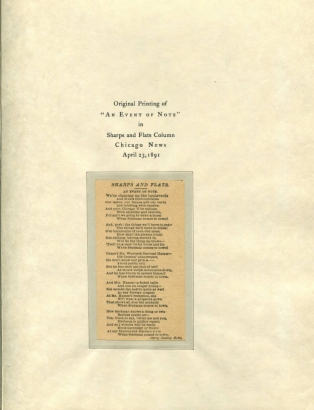 April 23, 1891.
Original Printing of Sharps and Flats Column 'An Event of Note'.

In Chicago, Eugene continued writing "The Current Gossip" for the Chicago Morning News, though after a few weeks Eugene renamed the column "Sharps and Flats."

"Sharps and Flats" became the most popular column of its time, and was reprinted in hundreds of newspapers daily. Eugene became known as the "father of the personal newspaper column." This meant that people read "Sharps and Flats" just because they were interested in what Eugene had to say.

Eugene wrote many satirical articles about life in Chicago.

He nicknamed the city "Porkopolis," in reference to the many wealthy people in the city who made fortunes from meat packing. Eugene disliked the factory-filled, dirty city which seemed to be constantly under construction.

He also realized that while the salary he was offered at the Chicago Morning News would have made him rich in Denver, in Chicago it was not enough to support his large family. For many years the Fields, despite Eugene's fame, were on the brink of starvation.

However, Eugene's years in Chicago were the peak of his creativity. He published hundreds of poems and several books.

Most of his poems were about childhood and children - specifically his own children. Eugene's 1888 poem "Little Boy Blue," one of the most known poems even today, is based on the death of his son. His other most famous poem, "Wynken, Blynken, and Nod" was written to entertain his children.

These many poems made Eugene famous as "The Poet of Childhood."

Ironically, Eugene hated the nickname. While Eugene loved being a father, he admitted he didn't like children that weren't his own. In fact, more than once he was caught making scary faces at children when he thought their parents weren't looking.

The Death of Eugene Field 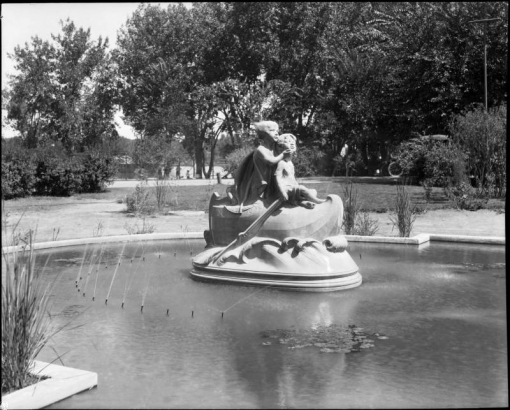 By 1895, things appeared to be going well for Eugene and his family.

His books and columns had begun to earn him real money, and for the first time in years the Fields enjoyed a comfortable lifestyle. They were able to move into a much larger house, and Eugene began collecting beautiful rare books with his extra income.

He was an in demand speaker, and was invited around the United States and Europe to read his poems and give speeches. Eugene started writing his autobiography in 1894, and continued working on it through 1895.

In November of 1895, Eugene was invited to give a reading of his work in Kansas City. Eugene ended up postponing the trip until later in the week, as he was not feeling well.

The night before Eugene was scheduled to leave for Kansas City, his fourteen-year-old son heard Eugene groaning and went to check on him. He was shocked to find his father dead.

Doctors determined that Eugene had lived for many years with an undiagnosed heart condition, which led to his completely unexpected death. Eugene was only forty-five, and had children ranging from ages nineteen to just under a year old.

The world was horrified and saddened to learn of Eugene's death, and the Chicago Morning News wrote "All the children of the land mourn their laureate."

Eugene Field has been one of the most recognized names in poetry for over one hundred years, and his many poems about and for children are still read and loved today.

Dred Scott Case – In 1857, a black slave named Dred Scott sued the United States government for his freedom since he had moved with his master from a state where slavery was legal to a state where it was illegal. The Supreme Court rejected the case because they claimed slaves were not U.S. citizens and could not have their cases heard by the Supreme Court. Many people were angered by the Supreme Court's decision, and historians believe the Dred Scott Case helped lead to the Civil War that broke out between slave owning and non-slave owning states in 1861.

notorious – famous or well known, especially for a bad reason

circulate – to move from place to place and person to person

undiagnosed - a disease or condition not identified by a doctor

laureate - someone who has special recognition as being the best at what they do, especially in poetry or the arts

How do you think the Denver Eugene Field lived in during the 1880s is different from Denver today? How might it be the same?

Have you ever read a poem by Eugene Field? What did you like about it? What didn't you like?

Eugene Field used satire in much of his writing (see definition above!). What would you write satire about in your daily life?

The Denver Tribune is on microfilm on the 5th floor of the Denver Public Library Central Branch.

Books By Eugene Field at the Denver Public Library:

Books about Eugene Field at the Denver Public Library:

Eugene Field: A Study in Heredity and Contradictions (Google eBook of the first biography of Eugene Field, written by his friend Slason Thompson)