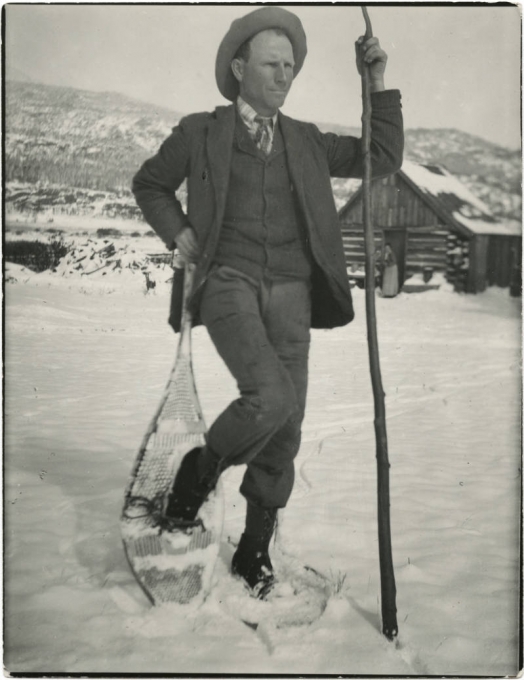 Enos Abijah Mills was born on a Kansas farm April 22nd, 1870. Before Enos was born, his mother and father tried to become miners in Colorado. They came back to Kansas because they could not make enough money mining.

His parents had many memories of their time in Colorado, and Enos grew up hearing stories about the mountains.

Enos loved being outdoors, but he was very sick as a child. Doctors told Enos to stay inside as much as possible.

No doctors were able to figure out why Enos was sick, or how to make him better. When Enos was thirteen, a doctor told his parents that since no one could diagnose Enos, he was not going to live very long.

Enos' parents decided he should move to Colorado. In the 1880s, Colorado was a place where many sick people went to recover from illnesses. They hoped being in the mountains would help Enos get better. 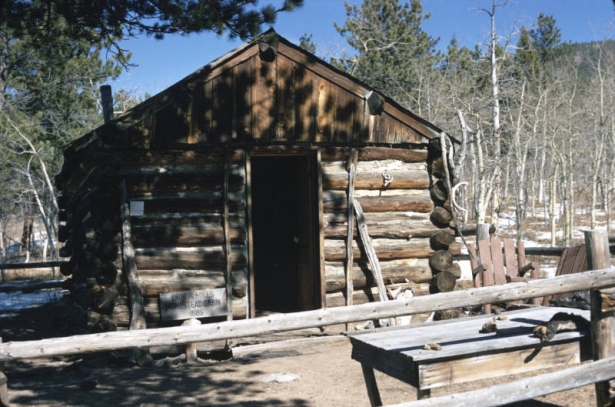 The Mills family was very poor, so Enos hitchhiked from Kansas to Estes Park, Colorado. In Colorado, he worked cleaning for distant relatives who owned a lodge.

Enos loved living in the mountains, and spent most of his time outside as he got better. He got to know the mountain trails very well, and began giving tours as a nature guide.

Enos wanted to earn enough money to buy land of his own. He was a nature guide in the summer, and lived in Montana during the winter to work as a runner in a mine. Runners were teenage boys who spent their days delivering tools and supplies to miners.

After working for a year, Enos had the money to buy a small piece of land by Longs Peak. Longs Peak was Enos' favorite mountain - he climbed it two hundred and ninety-seven times during his life!

Enos built his own cabin on the land when he was only fifteen years old. 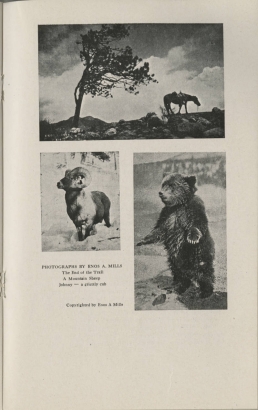 1921
Enos loved to share his wildlife photographs. Many were published in magazines around the country.

Enos never went to school, but he used libraries to teach himself different subjects. He was able to earn a promotion to engineer in the mine, even though many other engineers were college educated.

When Enos was twenty years old, there was a fire that destroyed the mine, and Enos lost his job. Enos decided to go traveling with the money he saved from his two jobs.

Enos wanted to camp in the wilderness instead of visiting cities or tourist destinations. He liked to travel alone, and spent his time writing stories about his adventures in nature.

John Muir told Enos he could use his stories to teach people about the importance of nature. Enos decided to return to the Rocky Mountains and become a conservationist as well. 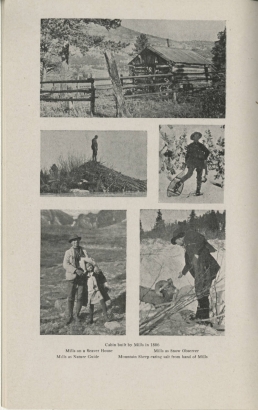 1921
Enos Mills living and working in the Rocky Mountains.

When Enos came back to Colorado, he was hired by the United States government to record how much snow fell in the Rocky Mountains. No one else wanted to spend months living alone in the mountains, but it was the perfect job for Enos.

Since Enos was all alone, he had plenty of time to write.

He sent some of his stories off to be published in magazines. They became very popular, especially with people in cities who did not have a chance to visit the mountains.

Enos wanted to give people the chance to experience nature themselves. He bought the lodge where he once worked and renamed it Longs Peak Inn, after his favorite mountain.

Longs Peak Inn became a famous vacation spot. Enos led hikes in the mountains during the days, and gave talks about nature in the evenings.

His talks were so popular that Enos was invited to travel around the country to teach people about the Rocky Mountains. 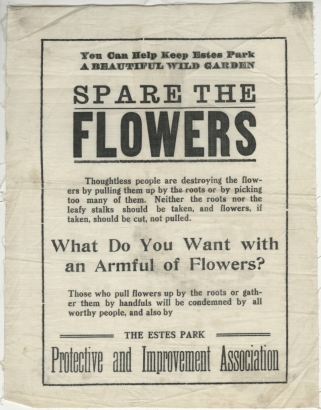 ca.1910
Enos put these signs up all around Estes Park to remind people not to pick wildflowers.

Enos began to worry as more people started to visit the Rocky Mountains. Many people were not respecting the natural environment.

Tourists dug up flowers and plants. Loggers and miners cut down trees and dug huge holes in the earth.

Enos knew that unless he did something, the plants and animals in the mountains could be destroyed forever. 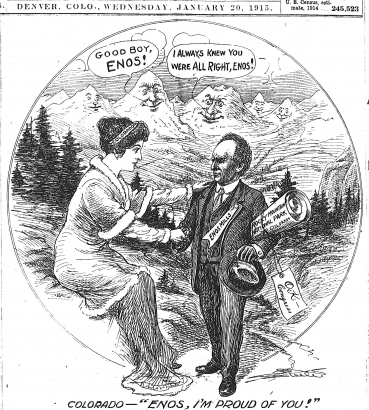 What does this cartoon tell you about popular opinion of the national park?

Enos spent years trying to convince the government and businesses that making a national park in the Rocky Mountains was a good idea.

John Muir died in 1914, but Enos continued working to protect the Rocky Mountains.

From then on, Enos was known as the Father of Rocky Mountain National Park.

Enos showed people how important it was to enjoy nature, and how to be respectful of the mountains. Many people became conservationists because of Enos.

In 1918, Enos married Esther Burnell. Esther was the first person to ever be named a professional nature guide by the National Park Service. They had one daughter, Enda.

In 1922, Enos was visiting New York City to give a talk about the Rocky Mountain National Park. He was in a subway accident, and got badly hurt. Although he continued working for months afterward, he never really recovered.

diagnose – to identify what sickness someone has based on their symptoms

lodge – a house or cabin open to visitors and guests

engineer – someone who supervises a mine including workers, equipment, and location. An engineer decides which minerals are valuable and should be kept.

national park – a part of the country protected by the government to preserve wildlife. National parks guarantee that the wilderness will be undisturbed so people can enjoy nature.

descendants – later generations of a family

Have you ever been to Rocky Mountain National Park?

Would the state of Colorado be different today if Enos Mills had not created Rocky Mountain National Park? Why or why not?

Enos Mills loved the Rocky Mountains so much that he spent his entire life teaching others about them. What are the things in your life you like to share with people around you?

Enos Mills Manuscript Collection  (Primary sources including photographs, articles, and speeches written by Enos Mills. The Enos Mills collection can be seen in person on the 5th floor of the DPL Central Branch)

Biography Clipping Files (Newspaper, magazine, and journal articles about Enos Mills that can be seen in person on the 5th floor of the DPL Central Branch)

Books about Enos Mills at the Denver Public Library:

Biography of Enos Mills from the Sierra Club

I would like to inquire whether the library has a copy of Enis mills book titled “the story of Estes Park and a guidebook”. I have a first addition, signed, copy in decent condition. I have had no luck finding a value for the book online and I’m hoping to find an institution that will value, care for and preserve the book.

Hello Christine! Thank you for your comment. Our collection development policy is to take two copies of items. We are fortunate enough to have two first edition copies of "The Story of Estes Park and a Guidebook" in our collection. You may want to check with your local history society to see if they are interested!

The Rocky Mountains should be one of the Natural Wonders of the World. My first sight produced a feeling of awe, majesty and respect for nature. The degree of impression that first sight ingrained in my memory will be part of me, forever.

Hi Ezequiel. We got this information about Enos Mills from the library's collection of Enos Mills' original papers and photos, and from the books he published (these are old books, but you can find them in the Western History and Genealogy Dept.) I hope this biography helps you with your project! Let us know if you have more questions for your project.

all of this is true