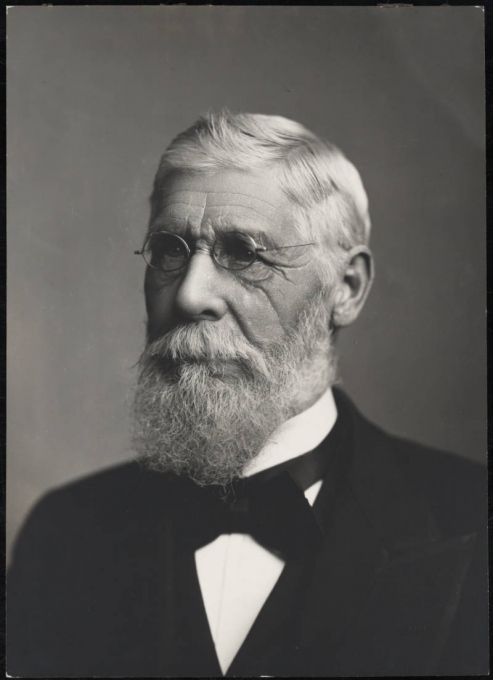 A populist governor of the state of Colorado.

In 1660, three brothers from Wales landed on the shores of America in New England. One of those brothers, Joseph Waite, went on to settle in New York and began a family that led to the birth of Davis Waite in 1825. Davis was born in Jamestown, New York, on April 9, 1825. Unlike many parts of the country at that time, Jamestown had a system of public education, and young Davis took advantage of it. His father was a lawyer, and after Davis finished his primary education in school, he went on to study law in his father's office. At that time, one didn't necessarily need to attend a formal law school, but could become a lawyer through apprenticeship. 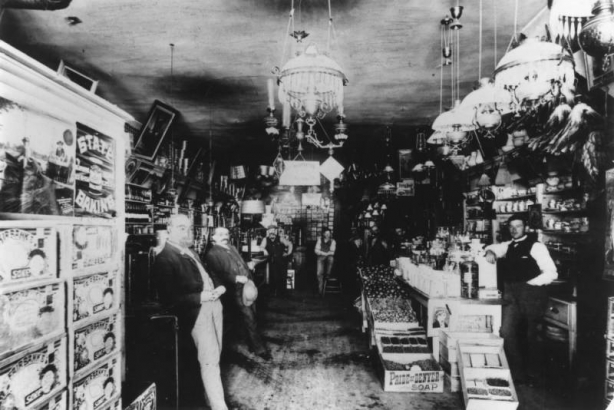 After completing his study of the law, Davis tried a variety of careers. He was employed as a lawyer, worked with newspapers and even tried the mercantile business. He was already interested in politics by this time and was supporting Democratic candidates such as Martin Van Buren and Franklin Pierce. By 1850, Davis had moved to Fond du Lac, Wisconsin, and continued working in the mercantile business. Soon after, he began supporting the new abolitionist party of the Republicans. His growing interest in politics even led to his election as a Wisconsin state legislator in 1856 on the Republican ticket.

After serving only one term in office, Davis moved to teach in a high school near St. Louis, Missouri. Local officials, however, made him resign because of his anti-slavery position. He was also unable to vote for Abraham Lincoln, as Lincoln was not on the ballot in Missouri. In 1861, Davis decided to move to Warren, Pennsylvania, where he became principal of the local high school, but soon left to return home to Jamestown, New York. In Jamestown, Davis practiced law, edited the Chautauqua Democrat, a Republican paper, and also worked on the Jamestown Journal.

Davis spent 15 years in the east before his desire to move west rose again. In 1876, he moved to Larned, Kansas, where he became a rancher and practiced law. By 1878, he won a seat in the Kansas State Legislature. This lasted only one year. In 1879, Davis became aware of the silver boom happening in Colorado and decided to strike out for Leadville, Colorado.

Finding his way in Colorado 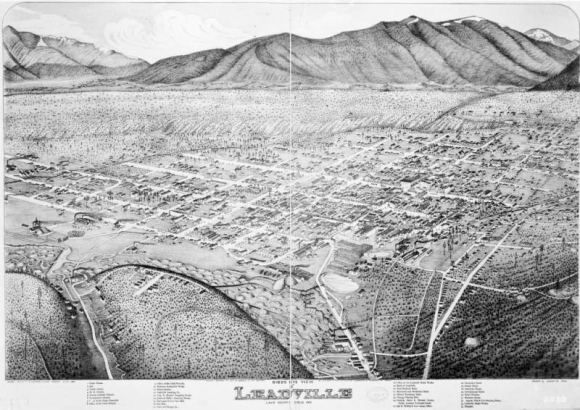 In 1879, Davis moved to Leadville with his new wife, Celia O. Waite. This was a second marriage for both of them, as Davis' first wife and Celia's first husband had died years before. In Leadville, Davis tried prospecting and had a law practice for two years. As the focus of the silver boom moved to Aspen, he and Celia followed. It was said that Celia was the first bride in Aspen and only the 13th white woman to move there. It was in Aspen that the couple would spend most of the remainder of their lives.

A boomtown like Aspen saw many disputes over mining claims and related contracts. Because of this, miners were in need of lawyers like Davis to settle disputes peacefully. He was often sought after for advice from the miners and was considered a friend by many of them. Eventually, Aspen became the largest city on the Western Slope, and Davis Waite was elected to be a judge in the new court system. While living in Aspen, Davis also launched a new populist newspaper called the Aspen Union Era. He was also becoming more and more dedicated to the idea of reforming the political system and protecting the rights of workers, farmers and women. 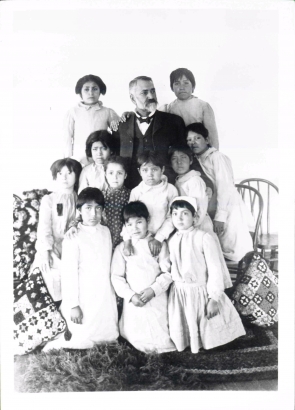 In May 1891, a convention was held in Cincinnati, Ohio, where a new political party was formed. It was called the People's Party or Populist Party. Their platform included land reforms to protect farmers, an 8-hour workday guaranteed to workers, Wall Street reform and the ability of the people to vote directly for their senators. By September of the same year, Colorado formed its own branch of the People's Party in Denver. The party got more and more support from Democrats and Republicans because the People's Party supported keeping the value of silver strong. Easterners wanted gold to be worth more than silver, while Westerners wanted silver to be worth more since silver was plentiful in the West.

In 1892, the People's Party decided that Davis would be the best candidate for governor and nominated him to run. Many newspapers like the Rocky Mountain News opposed him early in the race, but eventually came to support him. He visited nearly every county in Colorado during his campaign and won by over 44,000 votes. 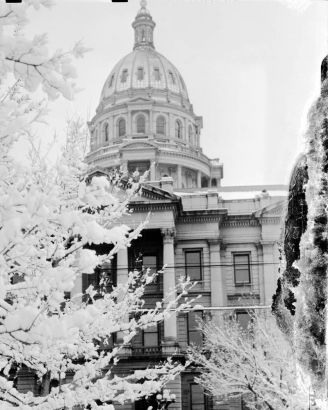 While he enjoyed a high degree of popularity when entering office, the fears of a silver market collapse were growing, and Davis sought to take on the anti-silver interests and Wall Street more directly. This led to his famous (or infamous) "blood to the horses' bridles" speech. In it he stated:

"And now, when is involved not the freedom of 4,000,000 black men only, but the liberty of 64,000,000 people, black and white, the same God of mercy and of justice will overrule evil for good, and no banker, no broker, no usurer, and least of all, no 'peddling politician' has it in his power to compromise the tremendous issue."..."And if the money power shall attempt to sustain its usurpation by 'the strong hand,' we will meet that issue when it is forced upon us, for it is better, infinitely better, that blood should flow to the horses bridles rather than our national liberties should be destroyed."

In this speech, Davis also said, "Our weapons are argumentation and the ballot - 'a free ballot and a fair count.'" Many who opposed him used this speech to claim he was calling for actual bloodshed and maybe another Civil War. Controversy would only continue to grow throughout Davis's administration. In November 1893, there was an election to decide if women in Colorado would be given the right to vote. The election was close and women were given the right by a majority of just over 6,000 votes. Waite, a supporter of women's suffrage issued a proclamation in December 1893 stating that, "every female person, a resident in Colorado, shall be entitled to vote at all elections in the same manner in all respects as male persons, and subject to the same qualifications."

In the midst of the new economic crisis around silver and massive unemployment levels, 1894 would prove no less controversial for Davis's administration. As governor, he attempted to remove two members of the Denver fire and police board. The commissioners on the board, however, refused to leave office and surrounded themselves with loyal police within Denver's city hall. Davis then ordered four companies of state militia soldiers along with Gatling guns to surround the city hall. Since neither side showed any signs of backing down, federal troops under General McCook had to intervene and break things up. Eventually the courts supported Davis's right to fire the commissioners. 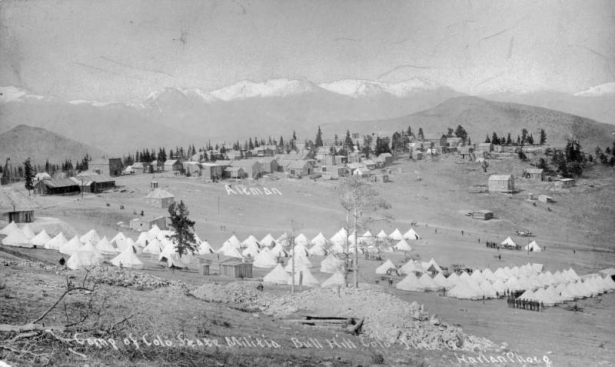 Another event where violence was not avoided was the Cripple Creek Strike in 1894. Many mine owners were cutting pay and instating 10-hour workdays. Miners began fighting these working conditions and succeeded in getting an 8-hour workday and $3.00 per day wages from several mine operators. Many other mine owners, however, decided to get the local sheriff to hire deputies to break up the strikers and even paid the sheriff to cover the cost of the strike-breakers. After violence broke out between the sheriff's militia and strikers and scabs, Governor Davis Waite intervened to negotiate between the strikers and mine owners. The mine owners refused the $3.00 wages and talks broke down. The sheriff then created an army of 1,300 deputies, and violence escalated. Gunfire was exchanged, part of a mine was dynamited, and some drunken miners even stole a train and drove it into Victor, Colorado.

This was a point at which Davis stood out greatly from other public officials of the time and even those of decades later. It was quite normal in the 1800s and early 1900s for public officials to respond to striking workers by calling out police or soldiers to put down the strikers and defend the companies. When the deputies started rounding up citizens, cutting telegraph lines and using increasing levels of violence against workers, Davis called up the state militia again and sent them in to protect the workers. At that point, the mine owners gave in to the workers' demands. This was a great victory that ended in the establishment of dozens of unions, not just for miners, but for laundry workers, restaurant workers and newsboys. 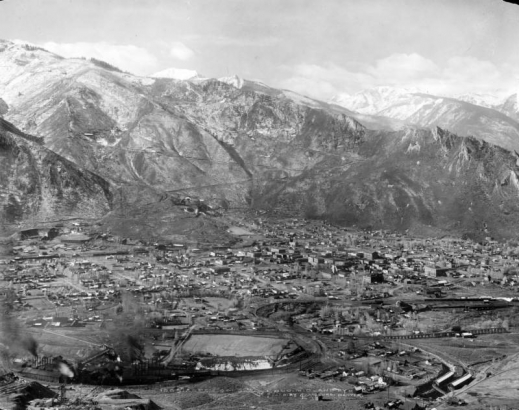 Despite Davis's efforts to support workers, farmers and women, his popularity had fallen greatly by late 1894, and he lost reelection. The silver crash had been so horrible to the state economy that many, including most women, blamed Davis for not doing enough to remedy the situation. He was openly bitter, in particular, about losing the votes of women after advocating for them to get the right to vote. It wasn't long after leaving office that he and his wife moved out of Denver. Davis tried to make money in mining ventures in Cripple Creek, but was unsuccessful. In the end, he moved back to Aspen to live out the end of his days. According to several newspaper accounts, Davis Waite died while cutting up apples with his wife for Thanksgiving dinner in 1901.

Martin Van Buren - the 8th President of the United States

Franklin Pierce - the 14th President of the United States

abolitionist - someone who fought to end slavery in the United States

prospecting - trying to find valuable materials such as gold or silver

nominated - to formally make a person a candidate in an election

infamous - famous for something people think is bad

usurpation - to take someone's power or property by force

suffrage - the right to vote

dynamited - to blow up using dynamite

Do you think Governor Davis Waite wanted to help people? Why?

Do you think he was a good governor or a bad governor? Why?

Why do you think women voted against him after they got the right to vote?

What do you think the most important thing he did was?

Blood to the horses bridles

Davis Hanson Waite : the ideology of a western populist

Essays in Colorado history. no. 1

History of Chautauqua County, New York : from its first settlement to the present time; with numerous biographical and family sketches