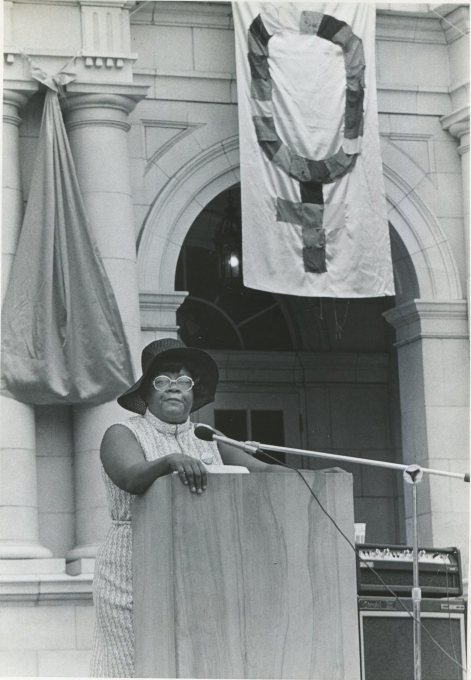 Arie Mae Parks was born in the town of Bedford, Ohio, on March 27, 1927. She was the fifth of eleven children. Arie's mother, Annie, was an elementary school teacher for many years and then became a nurse. Her father, Jesse Lee Parks, was a Methodist minister.

When Arie was twelve, her mother died in childbirth. Arie was the second oldest daughter, but her eldest sister had left the house and married. As the oldest woman still at home, Arie was left to raise her younger siblings, including the newborn sister who came home in an incubator two days after their mother's death. Arie took care of the house while her older brothers were in school or working odd jobs to help support the family.

Arie still managed to attend school even with the busy demands of her family. She graduated from Bedford High School as one of only two African American students in her mostly white graduating class. Arie's grades were so good that she earned a scholarship to Miami University in Ohio. Arie studied there for the two academic years, starting in 1945, and eventually went on to attend Case Western Reserve in Cleveland. While Arie was in college, she worked as an assistant for Jean Capers, the first African American woman on the Cleveland City Council.

This was Arie's first introduction to politics. She loved the excitement of political life, and Jean Capers saw that Arie had a gift for both arguing and negotiation.

Arie graduated college in 1951. This was in the middle of the Korean War. She applied for and was accepted to the competitive Women's Air Force. In the Women's Air Force (or WAF), Arie was a staff administrator, taking care of the day-to-day needs of the Women's Air Force. While enlisted at the WAF, Arie met William Taylor, a member of the United States Air Force. They were stationed together and became very close, marrying shortly after they began dating. Arie Mae Parks became known as Arie Parks Taylor after their marriage.

Arie rose quickly through the ranks of the WAF, and was promoted to staff sergeant. She was the first African American to become a Women's Air Force officer. Arie was put in charge of training new recruits. Arie served in the WAF for four years. In 1955, she was honorably discharged. Arie wanted to continue to serve in the military, but William did not like that his wife was a higher-ranking officer. William asked Arie to leave the WAF after her contract ended.

Jean Capers, the Cleveland councilwoman Arie had worked for throughout college, contacted Arie after her discharge and offered her a full-time position in her office. Arie accepted, and the Taylors moved to Cleveland in 1955.

Arie loved working with the City Council. She became the head of administration for Jean Capers. While her professional life was going well, her marriage suffered. William Taylor was very threatened by his wife's success. They began to argue frequently. Arie was very unhappy.

In 1958, Arie decided "Cleveland wasn't big enough for Arie Parks Taylor and William Donald Taylor. One of us had to leave." Arie divorced William, but decided to keep his last name. Arie wanted to leave Cleveland after the divorce, but was not sure where to go. She put her hand on a map and it landed on Colorado. She decided to move to Denver, Colorado's capital city.

Arie took a job as an administrator for the Denver General Hospital's Division of Disease. She decided to go back to school to further her education. She enrolled in accounting classes at the University of Colorado at Denver, and began driving a taxi at night to help pay for school. After Arie's graduation, she began working as an accountant with a Denver firm. 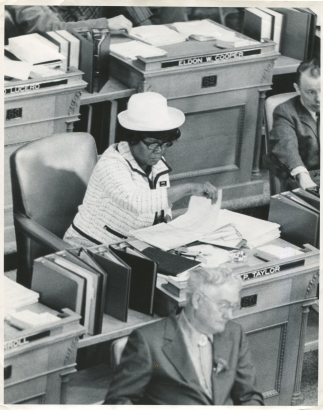 Arie Taylor in the Colorado House of Representatives

Although Arie kept her promise to never marry again, she could not stay out of politics for long. Within a few weeks of her arrival, Arie became a member of the Northeast Denver Democrats, eventually becoming one of the leaders of the group. She was actively involved in the Colorado Democratic scene, and in 1962, her political efforts were rewarded when she was named Deputy Clerk for the Denver Election Commission. Arie was so skilled at this position that she was named Chief Clerk in 1965.

In 1968, Arie made national news when she was chosen to represent Colorado as a delegate to the Democratic Convention. Arie was never shy about fighting for what she believed in. When the Democrats announced their plans to run all-white delegations, Arie protested this decision. Her passion and eloquence were recorded in major newspapers.

The Chicago Sun-Times described her as "a large, fierce, black woman from Colorado." Arie liked this description and continued to use it throughout her life. Her arguments at the Democratic Convention made her a political figure nationally, and she was asked to work on Robert Kennedy's election campaign.

Although Arie loved politics and working with politicians, she did not consider running for office until 1972. That year, friends convinced her to run for the Colorado House of Representatives as a representative of her Park Hill area. Arie used her years of experience to win against her much younger opponent by a large majority. Arie became Colorado's first female African American representative. This was the beginning of Arie's long career in the Colorado State House.

Arie in the House of Representatives 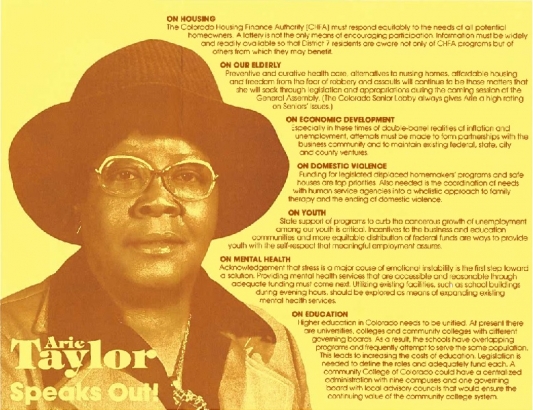 Arie spent her many years in the Colorado legislature fighting for the causes she thought were important. She supported women's rights, and was an important advocate for a law that allowed women to take credit cards out in their own names instead of their husband's. She helped create shelters and resources for women who survived domestic violence. She introduced bills to improve Denver's rapid transportation system, so people could get where they needed to go. She fought against police violence, especially violence against African Americans in Colorado.

Some of her bills were more personal. For example, Arie introduced a bill to eliminate coin-operated restrooms at Colorado airports after she found herself at the airport without change. Arie was very involved with the Denver Broncos, and helped support the team through her politics. She was a close friend of Pat Bowlen, who would become the owner of the Broncos. She often sat in his private box, and even gave him advice on how to run plays.

Arie knew it was important for Colorado to be accurately represented by its citizens. This meant that she wanted Colorado to include more people of color and women in the government. Arie even protested Richard Lamm's inauguration as Governor in 1975, because she did not think that he did enough to make Colorado politics open to minorities and women. People were surprised at Arie's protest, because Richard Lamm was a member of Arie's Democratic Party and Arie was his close friend! The governor eventually did add more diversity to his cabinet, and their friendship continued throughout Arie's life. 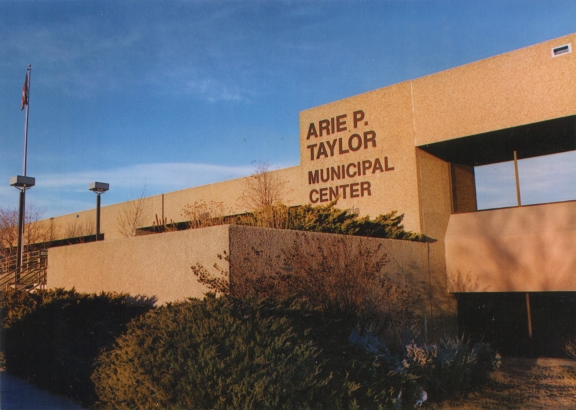 Arie began to get very stressed with the demands of politics, her business, and helping her Park Hill community with its daily problems. It began to take a toll on her health. In 1984, Arie announced that she was leaving politics and was going to work as a business administrator for Coors Brewing Company in Golden, Colorado.

As always, Arie did not stay away from politics for very long. In 1991, Mayor Wellington Webb appointed her to become the Denver Clerk and Recorder. Arie was the first female African American Clerk and Recorder in Colorado. Arie held this post until 1995.

Arie stayed very involved with civil rights, women's rights, and the Denver Broncos throughout the rest of her life. She won many awards for her work to improve the lives of women and African Americans.

Arie was named one of the Top 100 Influential Democratic Women in the United States in 1980. In 1999, the Arie P. Taylor Municipal Center in Denver's Montbello neighborhood was named in her honor. Arie thought it was strange that a building would be named after a living person, when they were usually named after the dead. "Am I sick?" she asked Mayor Webb, joking that he might know something she did not.

Arie helped many women and people of color get into both politics and business. Many business people and politicians throughout the country were mentored by Arie Parks Taylor.

Arie had a very large funeral, filled with the people she worked with and mentored in politics, including Wilma and Wellington Webb, former Mayor Federico Peña, former Governor Richard Lamm, and Governor John Hickenlooper. In 2004, Arie's friend Pat Bowlen nominated her for the Colorado Women's Hall of Fame. She was accepted and honored later that year. Arie Parks Taylor is a member of the Blacks in Colorado Hall of Fame.

eloquence – speaking with persuasiveness and force

advocate – someone who defends a cause or person

inauguration – a ceremonial introduction to an elected office

Why do you think Arie Taylor cared so much that all Coloradans were represented in the government?

Is it important that Arie Taylor was the first African American woman to hold so many offices in Colorado? Why or why not?

If you were a legislator (see the definition in the Word Bank) what laws would you pass? Why?

Biography Clipping Files (Newspaper and journal articles about Arie Parks Taylor. The Arie Parks Taylor clipping files can be seen in person at the Western History Department (5th Floor of the Denver Central Library) or at the Blair-Caldwell African American Research Library.

Arie Parks Taylor in the Colorado Women's Hall of Fame

Raising Siblings in Ohio
The Women's Air Force
Arie Comes to Denver
Back to Politics
Arie in the House of Representatives
Life After Politics
Word Bank
Get Thinking!
More Arie Parks Taylor Information