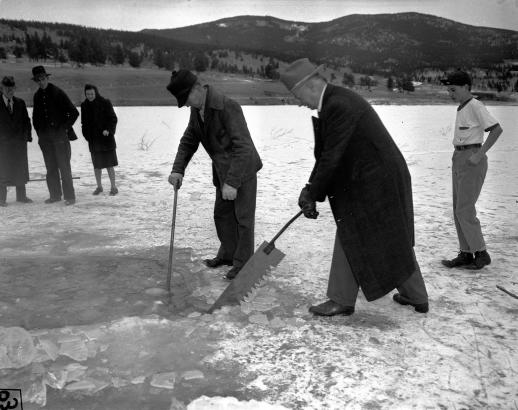 Raising up the Dead?

When does the raising of a submarine turn into a city event, including the local high school band members? Apparently on January 28, 1944, just such an event took place. This set of Rocky Mountain News images shows the raising of the Mountain Nautilus from the depths of Missouri Lake near Central City, Colo.  What is even stranger is how the submarine ended up 1,200 miles from the nearest ocean. Who in their right mind would have even dreamed up such a thing?
Rufus Owens, that's who! Owens was an engineer, in fact he designed the water distribution system for the City of Central City. Why a sub, you ask? It seems that in the 1890's the U.S. was at war with Spain and was looking for a vessel that could, undetected, defend our coastline from a Spanish invasion. So Rufus engaged the help of two doctors to invest in the submarine. Using his plans, two local contractors, William Lamont and Fred Ballard began secretly building the Mountain Nautilus.
Once the sub was finished, Rufus needed to conduct a test run. He had planned on crawling into the submarine for its maiden voyage but concerned friends talked him out of that idea. Instead, they suggested, load it up with stones and see what happens. For some unknown reason they loaded it up with 1,500 pounds of stone. Then, as you can guess, it sunk straight to the bottom and stayed there for the next 50 odd years. Some people wonder if it was just a bad idea that was only half baked. There seemed to be no steering device or propulsion. Why use such an insane amount of weight for a test run? No one seems to know and Rufus left the area a few months later to disappear into obscurity.
After many years passed, the ill-fated sub became exposed and someone stole the hatch door. The lake was refilled and it wasn't until the U.S. became involved with the Second World War that thoughts of the sub were brought to the mind of Central City native Fred DeMandel. Fred could remember as a kid seeing the sub being built, and began to search and retrieve the sub. At first they couldn't locate it, but on Jan. 11, 1944, DeMandel spotted it. The town rallied around the sub as good as any celebrity could hope to be recognized. A day was selected to raise the sub, and a holiday was declared for the school and many, if not all, business closed. First a hole was cut in the ice above the sub. A steel tripod was erected and hooked to the sub's nose. On the first try the chain broke, damaging the sub's nose but the second attempt was a success. Around 300 people and newsmen gazed in awe while the Central City High School Band stood on the shore playing "Columbia, the Gem of the Ocean". It took an hour to hoist it up to the shore. It still contained the original rocks inside, but confusing to most were the five 5-foot iron rods sticking out from both sides. This still hasn't been explained.
The sub floated around from museum to museum for years until Wm. Russell stored the sub in one of his warehouses where it sat for almost 40 years. If you would like to view this piece of history you can visit the Gilpin County Historical Society who recently purchased it from the Wm. Russell estate.