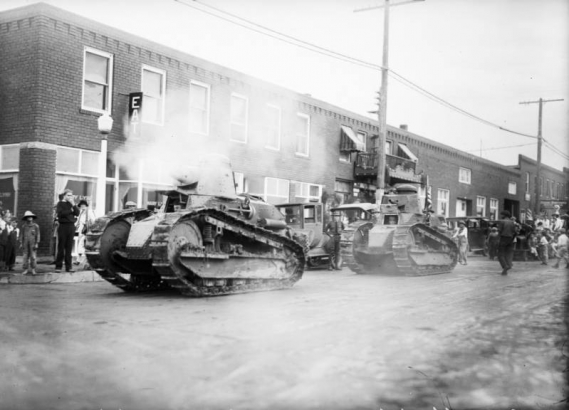 At first glance, this picture of armored tanks rolling down the streets of Olde Town Arvada could be depicting any number of scenarios. Is it a Cold War display of force designed to let potential adversaries know that the citizens of Arvada are ready to defend their hometown at all costs? Is it just some hobbyists looking at new ways to beat winter driving in beefed up all-terrain vehicles? The answer is decidedly less aggressive.

These tanks were drafted from a local military installation in 1927 to take part in the third Annual Harvest Festival, a tradition which continues to this day.

What also makes this photo interesting is the blurry looking blob hovering over the lead tank. At first glance, it seems as though it could be light damage from a time-faded photo. But a closer look, not at the photo, but at the catalog record, reveals something interesting. The "blob" is actually just a cloud of smoke coming from the tank's barrel. We know this only because one of our diligent photo catalogers saw fit to make note of every relevant detail on the picture for future users.

Our catalogers are ruled by a set of very strict guidelines that help them describe the photos in our collection, but have plenty of leeway to point out elements they think will be significant to researchers, including cannon smoke. It's serious work with long-term ramifications. After all, if they miss an important photo element or mislabel a work, it could be lost forever to library customers who actually need to use it.

A good catalog description can also help mitigate confusion. It's less likely that a photo like this could be misused when an authoritative description like the one in our catalog exists.

As for Arvada, the Annual Harvest Festival has been going gangbusters for 93 years and most years they haven't needed the tanks.

Great story. Wonder what or who they shot.

Thanks, James! They sure look like Renaults and since they were surplus, it's a good chance that they would have been available in 1927.

Wow! Great picture and commentary. I live in Arvada, so this is way too cool!

Looks like a boof, if boof didn't mean what it actually means.

Perhaps they were from a regular army unit stationed at Ft Logan or a national guard unit at Camp Hale. Who would want a couple of WW I tanks manufactured in France anyway ? As a " trophy " for a city park some where ?

Hi Adam - Thanks for commenting. Those French tanks were the only ones that were manufactured by US allies during WWI. When the US entered the war our army had no tanks at all and thought that manufacturing French tanks was better than designing our own from scratch.

Though it's culturally popular to mock the French military (Full disclosure: I've done it myself once or twice), they actually performed a lot better than they're generally given credit for.