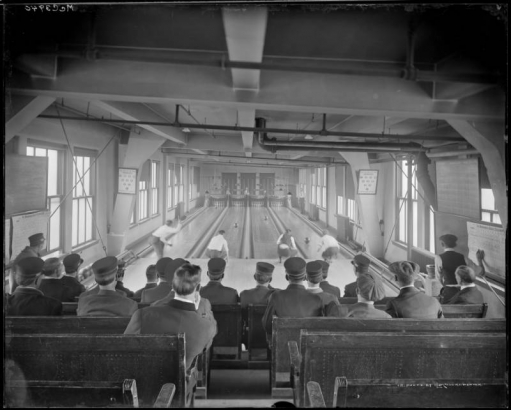 When most of us think of the early 20th century workplace, we think of oppressive mines and factories, or a buttoned down office with inkwells and a stern overseer. While that may have been true for employees of Colorado Fuel & Iron, that was not the case at the Denver Tramway Company (DTC), as the picture above indicates.

If anything, the DTC's headquarters were more like the offices of an internet start up than most workplaces of its era.

Built in 1911-1912 and located on the corner of 14th and Arapahoe, the DTC Building was truly a multi-purpose facility. The DTC's new headquarters cost $396,000 (about $9.8 million in 2017 dollars), and had something for everyone, including the workers.

Five of the building's eight floors were used by the DTC while the other three were rented out. But what's important for our purposes is what the DTC housed in its basement. On its lower levels, the company's headquarters had a number of amenities designed for the comfort and recreation of its employees, including the lovely bowling alley pictured in this Louis McClure photo (MCC-3940)

According to Denver Municipal Facts, the building also included a full gymnasium, showers and baths and a library/reading room. While these perks might seem spartan when compared to the cupboards full of snacks and pool tables at Google or Facebook, they were incredibly cutting edge in the world of 1912.

If you love learning about Colorado and Denver history, you'll definitely want to follow the Western History and Genealogy page on Facebook.

I went to CU Denver for year when it was still housed in the Tramway building. The office building part was used by Administration and the tram car "barn" was where the classrooms were. All of the classrooms I had were windowless. I'm told there are still classrooms in use in that building.

The bowling alleys were not available for student use. I can't tell from the photo, were those mechanized lanes? I didn't know there was technology like that in 1912.

Hi Jude - Thanks for sharing that with us! As far as I can tell, automatic pinsetters weren't common until the 1930's, so I'm guessing that these were manual.

If you zoom in on the photo you can see the manual pinsetters (live humans) in the back, behind the pins.

Here at DPL we've obviously got the library/reading room part covered, but how cool would it be if we had a bowling alley too??

I think this is a case where we'll have to agree...to agree! That's an amazing idea!

The bowling lanes at what was then called Mammoth Gardens on Colfax (today the Fillmore) still had "manual" pinsetters when I was a kid in the 1950s. Back then, it was a job similar to that of being a restaurant dishwasher- one for someone who did not have a lot of skills.

And the employee recreational facilities provided in the 1911 Tramway building surely were offset by the company's other labor practices which led to The Tramway strike ten years later, one of the bitterest of that time.

Charles, thanks for reminding us of the Tramway strike. I say sarcastically, the strikers didn't know how good they had it.

Forgive me for this one--but it appears that the tramway employees' strikes weren't limited to the ones in the bowling alley.