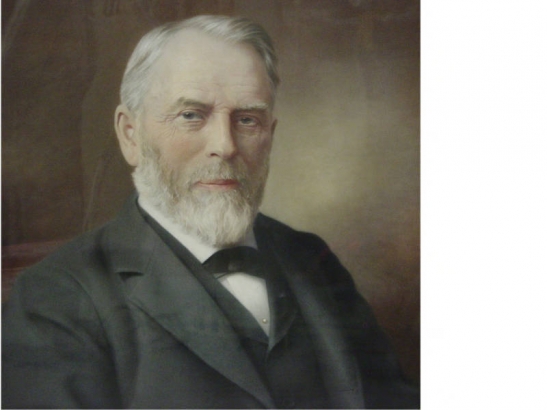 [Warning: Quotes in this article include derogatory language, in accordance with the racism of the time and the original writers.]

William N. Byers has been celebrated as one of Denver’s earliest and more vociferous boosters. He ran Denver’s first newspaper, the Rocky Mountain News, from 1859 to 1878 and served as its first owner and editor during that period. His promotion of the area’s agricultural and economic benefits, some of which were questionable or downright lies, helped enrich the city, state, and Byers himself. However, as they say, with great power comes great responsibility, and Byers used his power in ways that caused harm to many of Colorado’s residents of color, particularly local Cheyenne and Arapaho people.

Byers’s greatest harm was centered around the Sand Creek massacre in late 1864. A strong supporter of Governor John Evans, Byers helped to promote the concept of an “Indian War” being waged at that time and further perpetuated this myth in his 1901 volume, Encyclopedia of Biography of Colorado. Indeed, violence was perpetrated by Native Americans and white settlers, but to call it a full-scale war was excessive by most standards. Through 1864, the Rocky Mountain News was full of “Indian raids,” reports of those killed by Native American attackers, and a barely averted plan to massacre settlers to the south and all along the Platte (Aug. 26, 1864). White panic flourished when the Hungate family was murdered and mutilated just outside of Denver in June. The rhetoric of newspapers in the region, including the Rocky Mountain News, only served to further excuse violence against all nearby Native Americans, as would be seen.

In August, the Rocky Mountain News published an appeal by Governor Evans to establish civilian militias to fight “the merciless savages.” To back that up, the News published its own editorial, written or at least approved by Byers, that encouraged citizens to join. The editorial declared, “A few months of active extermination against the red devils will bring quiet, and nothing else will.” (Aug. 10, 1864). Three days later, they again published an appeal from the Governor, this one specifically for volunteers to join the Third Regiment. On October 5, the Rocky Mountain News published under the headline “Good News for the Third Regiment,” a message from Colonel Chivington that “The boys of the Third may soon be off on the war path [sic]. Let the red skins [sic] look out now.” 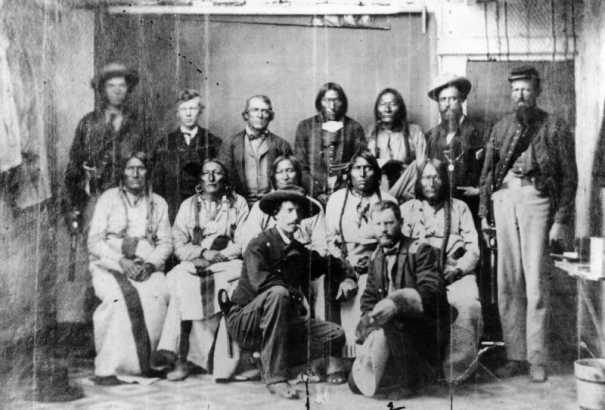 Controversies over blame and cruelty surround the history of the Sand Creek Massacre. Regardless, on November 29, 1864, First and Third Regiment cavalry attacked the village of Cheyenne and Arapaho people under the leadership of Black Kettle, a Cheyenne chief trying to maintain peace. There are accounts that Black Kettle was waving an American flag and/or a white flag at the time of the attack. In spite of all indications that the village was peaceful, US troops killed approximately 200 of the men, women, and children as they tried to flee. The volunteers then mutilated their corpses and took gruesome trophies of their kills.

In the aftermath of the Sand Creek Massacre on November 29, 1864, the Rocky Mountain News trumpeted it as a “Great Battle with Indians,” and celebrated the deaths of Native Americans (Dec. 14, 1864). Even after multiple federal jurisdictions investigated the incident and declared Sand Creek a “foul and dastardly massacre,” Byers’s paper continued to stand by Chivington and Governor Evans, endorsing and publishing their counter-arguments and endorsing the “Sand Creek Vindication Ticket” that November.

Byers continued to endorse this false narrative of Sand Creek years later. An 1870 column expressly written by the News’s editor--Byers--argued that “our soldiers should not be blamed for killing women and children in their onslaughts upon Indian camps.” As an example, he described, “at Sand Creek our men were wounded and killed by arrows shot by tender aged boys--and, Heaven save the mark--tender squaws” (RMN Apr. 13, 1870). He had not changed his story by 1901, again claiming that the investigations were intentionally biased against Chivington and “ignored all testimony as to the immediate culpability of the Indians slaughtered, as revealed by the numerous scalps and piles of plunder found in their possession” (Encyclopedia of Biography of Colorado). 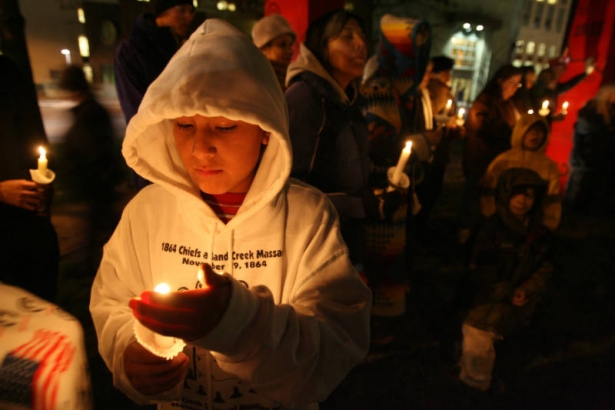 While Byers’s words may seem less significant as we now acknowledge the horror of the Sand Creek massacre, it is worth noting several specific elements of harm that his words did. In contributing to an environment that would allow for such a massacre, Byers contributed to the generational trauma experienced by the massacre’s survivors and their descendants. By denying the reality of what happened, he continued to twist that knife and contributed to the cover-up of indigenous memory for ensuing generations.

This is an important reminder that the supporters and perpetrators of the Sand Creek Massacre maintained their false narrative, and even embellished it with undocumented "facts," well into the twentieth century. More than 30 years ago, in researching the street names of the Alamo Placita neighborhood in the Western History Department at DPL, I learned that Downing Street was named for Jacob Downing (1830-1907), a Colorado pioneer, real estate developer, and Civil War hero, who participated in the Sand Creek Massacre as Major Downing of the First Colorado Regiment. Downing believed and stated, "I think and earnestly believe the Indians to be an obstacle to civilization, and should be exterminated." Downing never publicly regretted his role in the massacre, and in fact relished his reputation as an Indian fighter to his dying day.
He actually led the first expedition against an encampment of peaceful Cheyenne Indians in May 1864 at Cedar Canyon, and embellished his account of his prowess with each telling of the story. In his official report following the Cedar Canyon expedition, Downing claimed that about 25 Indians were killed and 30 or 40 more were wounded, and that about 100 horses were captured. However, by 1895, when he was interviewed for Hall's History of the State of Colorado, he claimed that "after some hours of hard fighting, mainly in a hand-to-hand encounter, the Indians were routed with a loss of 38 killed, and a large number wounded. More than 600 ponies were captured and the village destroyed." And in 1903, when the 73-year old Downing again recounted his exploits, this time for the Denver Post, he claimed that the fight at Cedar Canyon involved between 400 and 500 Indians, of whom 116 were killed; the number of captured horses increased to 800 in this retelling.
While changing the name of Downing Street may be impractical, I hope that the intrepid staff of the Western History Department can identify a worthy historical figure of the name Downing, after whom the street can be renamed. Jacob Downing does not deserve that honor.

Thank you for reading and for your thoughtful comment! We are certainly intrigued by your idea to reframe the name if it cannot be changed.

Byers also published anti-Chinese articles in The Rocky Mountain News that helped influence negative opinions and resulted in a race riot in 1880 that killed one man and destroyed Denver's Chinatown.

Thank you for that addition. Byers's racism certainly didn't stop with Native Americans. He was also duplicitous about supporting African American suffrage.

All very fascinating and eye opening. Keep up the good work.

Thank you, Mary. Glad you appreciated it!

We take Downing north when we want to go downtown.
Why not make a new word from the name and make it the thing
we love to do: Downtowning.

Very clever. Thanks for sharing!

Just ban and erase everything that makes me uncomfortable and isn’t current year.

The Denver Public Library embarked on the renaming of the Byers Branch Library in the fall of 2020 after discovering that the namesake of the branch had been a supporter of the Sand Creek massacre (as laid out in this article).

Over the last two years, Denver Public Library has been working on a new strategic framework to serve our community for the next ten years. As part of this effort, a new vision, mission, and values were developed with involvement from staff, partners, commissioners, and the community. We are guided by our core values which are: Welcoming everyone, Fostering curiosity, Strengthening connection, Challenging inequity, and Honoring public trust.

These values guide our work daily and have helped us establish our priorities during the pandemic and social unrest. As we learn more about society’s challenges, we remain curious and ask ourselves how we can be part of the necessary change to create a strong community where everyone thrives.