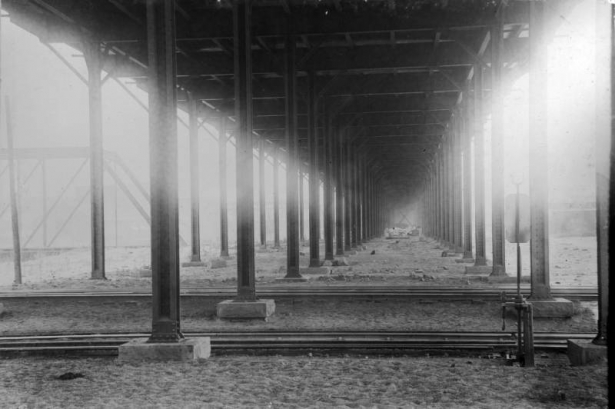 Between the years of 1881 and 1908, the City of Denver embarked on a massive bridge building project. These were not metaphorical bridges between disparate groups, these were real steel and concrete bridges known locally as, "viaducts" (more on the difference between "bridges" and "viaducts" later).

During the period mentioned, the City of Denver constructed 21 bridges and viaducts, including the 14th Street Viaduct pictured above, for a total cost of $905,502.93, according to the Denver Municipal Facts. That comes out to roughly $24.5 million in today's dollars and represented a substantial investment for the young city.

So, what makes a viaduct different from a plain old bridge? According to Merriam Webster, a viaduct is a, "...long elevated roadway usually consisting of a series of short spans supported on arches, piers, or columns." A bridge, on the other hand, is, "a structure carrying a pathway or roadway over a depression or obstacle (such as a river)." As most of the viaducts crossed either Cherry Creek or the Platte River, Denver's viaduct system could have really been called either.

Because the viaducts stretched well beyond the banks of the Platte and Cherry Creek, they had the serendipitous side effect of creating an almost subterranean-like world in the shadows under their girders. These shadowy spots provided shelter for the homeless and, in later years a film noir-like atmosphere for Denver night spots like the Wazee Street Supper Club and Rock Island.

For better or worse, most of the viaducts are gone and the ethereal light that's captured in today's photo are a thing of the past. Nonetheless, those elevated roadways gave Denver a unique visual character for the better part of a century.

Check out more Denver and Colorado History on the Western History and Genealogy Facebook Page.

Oh, the viaducts... I particularly miss the ones on 15th and 16th Streets.

I remember the viaduct across Park Ave W.
This article needs a slide show of the viaducts.
Thank You!

I understand why the city replaced the viaducts/bridges--the 20th st. bridge was considered too structurally shaky to allow RTD buses on it--but I miss them all the same. There were some really fine photos on display at the DPL on the fifth floor last year done by Kim Allen: great shots of viaducts, warehouses, railyards, all the things in "LoDo" before it became "LoDo".

Great post! I second the request for more photos. Are there any viaducts left in Denver?

As far as remaining viaducts, I guess there's the Colfax viaduct, which adds some interest to the area around the Ironworks bar; and for now there's the I70 viaduct, which is interesting to drive under between York and Steele streets, but it looks like it will be replaced with a below-grade highway in the near future. Neither of them are old steel viaducts like the one shown in the picture here, however.

It seems like the original viaducts are all but gone - That said, I think the elevated portion of 8th Avenue between 1-25 and Lipan (roughly) would count.

I grew up near 41st & Madison near the I-70 viaduct. I remember how depressed and depressing it was with the darkness and invasion of the neighborhood. It should never have been built in the middle of the neighborhood and ruin it. Not liking the solution that is being pushed through in the area.

Hi Carol and thanks for the comment. It really was amazing how much the viaducts changed the character of the neighborhoods they crossed...and how odd some neighborhoods now seem without them.