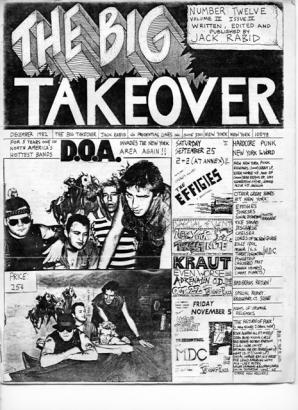 Tom “Headbanger” Hallewell was an influential figure in Denver’s early punk scene. He wrote his own zines, including Rocky Mountain Fuse and My Degeneration, played in the band Da Butchez, and was one of the first to put on and promote shows in the Denver area (at a time when it was hard for punk bands to find places to play). He was a jack of all trades and inspired others to be the same. Tom also acquired a large and impressive collection of concert flyers, zines, and correspondence from bands across the country (now located in the Tom Hallewell Papers at Denver Public Library). In this time before the Internet, and before large media conglomerates would talk to most punk bands, such zines and letters functioned as tools of community, allowing punks to keep apprised of what was happening in their town or others, to find places to play or sleep when they went on tour… and to get keyed into the music that informed their lives. As old punk icons begin writing their memoirs, old scenesters begin writing the histories of their towns’ scenes, and as newer artists and musicians discuss how punk has informed their own art form, punk has taken on an historical and sociological importance. In fact, Denver was recently the chosen city for Search & Destroy, a retrospective of West Coast and Denver punk. This attempt to raise punk art to the level of “high art” took place in a series of showings, concerts and talks at established galleries such as MCA. But high art or just plain old art, history or just music, Tom’s collection serves as an important (and entertaining) document of an exciting musical time. The images above offer just a hint of what the collection contains, and might still evoke some of the controversy punk sparked in those early days. Come into Western History and Genealogy to see this collection. Also check out the growing virtual museum of Phil “the Fan” Hamon, an important Denver music icon that went on his way too soon.