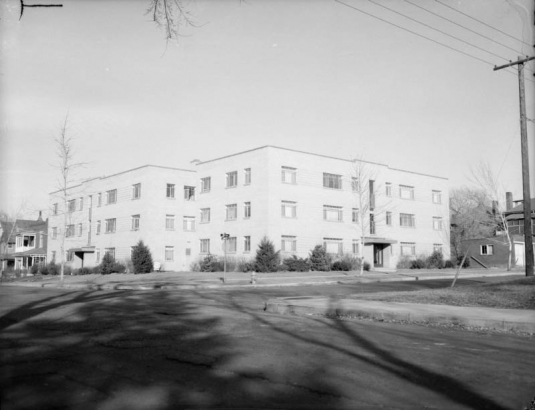 Thomas Washington Bean was an astute African American business pioneer. He was considered one of the most successful businessmen in Denver. Bean was born in Louisville, Kentucky on December 17, 1885. He came to Denver in 1911, on the Denver & Rio Grande Railroad, and worked as a dining car steward. Bean liked Denver and decided to stay. His life was full of "firsts," which included operating music vending machines in Denver's businesses, being the first African American to operate a taxicab service in Denver, and being the first African American to serve on the Denver Board of Adjustment Zoning, from 1957 until 1980.

Bean had the ability to understand the housing needs of the Denver minority community, which allowed him to successfully devote his life to providing homes and living accommodations for low income families. He was a builder and manager of both the Hildreth Hotel, which he acquired at 21st and Arapahoe Streets, and renamed the Bean Hotel. The Bean Hotel provided a 30-room capacity. In 1951, Bean financed and built the Bean Apartments at 2100 Franklin Street. He personally developed and arranged financing for African Americans to purchase or rent homes when available resources were non-existent for minorities during the time.

Bean passed away on July 10, 1987 in Denver. During his lifetime, he received many honors and commendations. The Thomas Bean Towers, at 2350 Cleveland in Denver, was developed and operates with federal housing funds to make rent affordable to low income apartment tenants, and was named in his honor. In 1990, ChristianVolunteering.org established the Thomas W. Bean Foundation, Denver, at 2608 Welton Street, which provides volunteer opportunities in the areas of fundraising, political advocacy and justice, and social services.

Many African Americans credit their business successes to Bean's business acumen and guidance that he willingly shared with them. For many Denverites, he was more than a businessman, builder, developer, financial ace, and property agent. He was a builder of hope and achievement for many people. It is often expressed that he elevated the quality of life for Denver citizens, especially the disadvantaged.

Growing Up Black in Denver, by Billie A. Grant, Ernestine Smith, and Gladys Smith, 1988.

Curtis Park, Five Points, and Beyond: the Heart of Historic East Denver, by Phil Goodstein, 2014.

Thanks for informing me about someone I didn't know about. I've been in Denver since '85 but wasn't aware of his death in 1987.

Wow! Great to learn about such an influential Denverite that I bet many (including myself) did not know about.

Anonymous, thank you for your comment. It was great for me to learn about Thomas Bean and his enduring contributions to Denver and Colorado as well.

Tried to send letter to the Welton street address (Thomas W. Bean Foundation) which was returned "no such number". Also tried 303 296-1340 (not a good number). Do you know if the foundation still exist? Thanks

It appears that the The Thomas W. Bean Foundation is a viable and existing foundation in Colorado. You might try this address 2501 Bruce Randolph Street, Denver CO 80205.

We just want to thank the Thomas W. Bean Foundation for their support. Can't express how much we appreciate YOU!