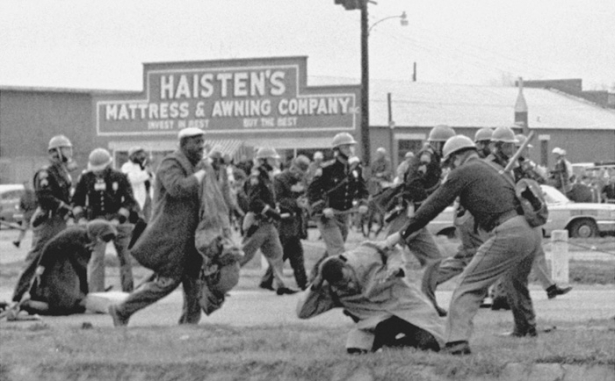 Jim Crow laws such as literacy tests and poll taxes were instituted to disenfranchise African American voters and to keep them from voting. Despite being intelligent and well-educated, you could not pass the literacy test constructed by many states because they were created with failure as the main objective. Many of the tests were assembled in such a way as to be downright illogical. There were many instances where African Americans knew the correct answers to all the questions, but at the discretion of the official administering the test, the test-taker would get a pass or fail. If the official wanted you to pass, he would ask you the easiest question on the test - "Who is the president of the United States?"  In turn, the same official might require an African American to answer every single question correctly, in an unrealistic amount of time, in order to pass. Some tests had as many as 68 questions that had to be answered correctly. Connecticut was the first state to enact a literacy test requirement to vote.

Another method of disenfranchisement was the slow pace of the registrar's office and the limited number of days and hours the office was open. This limitation was designed to reduce the number of opportunities for African Americans to register to vote. Dr. Martin Luther King, Jr. tells us that "out of 15,000 Negroes eligible to vote in Selma and the surrounding Dallas County, less than 350 were registered." Kristen Clarke suggests that in "1961, only 156 of 15,000 voting-age African Americans in Dallas County (Selma's county-seat) were registered to vote."

City ordinances and local laws prevented blacks from holding parades and public meetings. When approval was granted, these public meetings were subject to surveillance and harassment by public officials. The point was to keep African Americans from collectively (and publicly) assembling against injustice, which brings us back to Selma.

Why was Selma important in the African American campaign for the right to vote? I'll share some context to answer that central question.

On January 2, 1965, Dr. Martin Luther King, Jr., the Student Nonviolent Coordinating Committee (SNCC) Direct Action Unit, and the Dallas County Voters League activated a voter registration project in Selma. The Dallas County Voters League invited SNCC and the Southern Christian Leadership Conference (SCLC) to assist them in registering more African Americans to vote. As observed by Dr. King, on the designated days that the county and state registrars were open, African Americans and others would gather at the Brown Chapel A.M.E. Church and walk together to the courthouse. Reflecting on that time, Dr. King said, "More than 3,000 were arrested in Selma and Marion together." Dr. King was arrested on one of the marches to the courthouse.

The right to vote movement was underway in Selma and Dr. King and his cohorts, even from jail, continued their strategy to keep national attention on Selma. The demonstrations in Selma and other cities in the South were held to declare the existence of injustice and to effect change by methods of nonviolence. At every opportunity Dr. King emphatically stated that "all American citizens must be free to exercise their right and responsibility to vote without delays, harassment, economic intimidation, and police brutality."

Dr. King unwaveringly expressed whenever he could to President Lyndon Johnson and U.S. Attorney General Nicholas Katzenbach that the voting sections of the 1957, 1960, and 1964 Civil Rights Act were "inadequate to secure voting rights for Negroes in many key areas of the South." He urged President Johnson and others to pass a voting rights bill, which would secure the right to vote "without delay and harassment."

On Sunday, March 7, 1965 (known as Bloody Sunday), 600 hundred marchers assembled in Selma and, led by Congressman John Lewis and other activists, crossed the Edmund Pettus Bridge on a protest march to Montgomery, Alabama. The marchers were only a few feet short of the bridge when their way was blocked by Alabama State troopers and local police. The marchers were ordered to turn around. When the marchers refused, the police shot tear gas and began beating the nonviolent protesters with Billy clubs and whips. Over 50 people were hospitalized as a result of this bloody and tragic event. Congressman Lewis was badly clubbed on the head during the Bloody Sunday attack.

Selma is important because "Bloody Sunday" was televised around the world. People saw first-hand the violence and bludgeoning of African Americans in their non-violent quest for justice and the right to vote. Clarke states that "the Alabama Project -- a campaign led by the SCLC -- sought to expose the then-existing national crisis of black voter disenfranchisement and compel desperately needed federal intervention."

Dr. King and many activists in Selma on Bloody Sunday believed the results of that tragic day was about more than writing a federal law; it provided an overview of the struggles and triumphs of a grassroots movement for change that involved a broad range of engagement and action, by many people - over time.  On August 6, 1965, the Federal Voting Rights Act was passed. Dr. King and Congressman Lewis insightfully (and respectively) asserted that "Selma brought us a voting bill." (MLK Jr.) and "President Johnson signed that act, but it was written by the people of Selma." (JL)

Yes, progress has been made since the signing of the Voting Rights Act of 1965, but if we consider where we are today, there remain newer challenges facing African Americans, Hispanics and others around the country that still excludes many voters from access to the ballot box. We must continue to be vigorously opposed to obstacles to voting rights and work together to ensure that all Americans prevail in their right to vote -- regardless of their status in society or the color of their skin.

Wonderful information to add to one's knowledge of the continuing need to improve society.

This struggle for justice is not over. Southern states have recently passed restrictive requirements for state issued ID cards in order to vote and have limited the number and location of voting sites specifically aimed at restricting minority participation in voting.

I read Ms.Nelson's article on 3/7, the anninversary of the Selma march, after just retruning from overseas. The article is well researched and concise. Well done, Annie