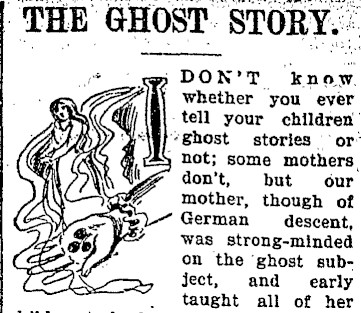 In November 1874, the Rocky Mountain News made an announcement. Its staffers (or maybe its editor) had had enough:

“The NEWS hereby declares its purpose to insert gratuitously notices of no more ghosts. They are becoming altogether too common, and the denizens of the other world appear to be encouraged by the attention which they receive in this, to make unduly frequent visits.”

Yet before they would cut off all ties, the newspaper had to tell one last story. Thus, in November 1874, the Rocky Mountain News told its “last” ghost story. It told the tale of two ghostly women who apparently haunted a Castle Rock brewery on the Denver & Rio Grande railway. “What their object is in haunting the brewery in question has not transpired,” the article declared, but the spectre’s lights and groans clearly inconvenienced the man who was hired to sleep there overnight. As with many ghostly tales, there was little closure to the story. The article ends by referencing another man who lived in the neighborhood who had been awakened as well, so at least the poor brewery worker wasn’t making it up. 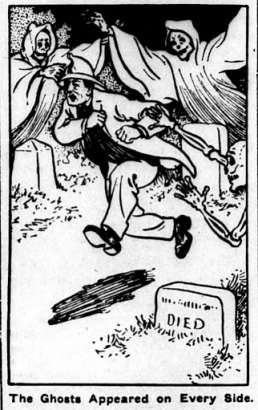 Ironically, like ghosts that continue to haunt the same places even after they are declared dead, tales of ghostly encounters continued to haunt the pages of the News even after they were declared off-limits. Perhaps the declaration was the doing of a particularly frustrated editor who saw reason shortly thereafter and allowed the spooktacular tales to return. Perhaps they had intentionally left themselves the “out” of the qualifier “gratuitously,” and all future descriptions were simply not “gratuitous” in the eyes of the News. Or perhaps the declaration of no more ghost stories was just a publicity stunt that the paper never intended to honor. As with the intentions of the two women in the brewery, we may never know. One thing is certain; the ghost stories returned, time and time again over the ensuing years.

Some of these stories were short and sweet, as is the case of the above article about a young man who regularly met a ghost at the Larimer Street bridge and “seem[ed] to like it” (August 5, 1876). Some were long and soul-stirring, such as the June 1879 story about “a house whose every brick is a tomb,” which left its tenants with an uneasy feeling until an investigation found a murdered girl in the wall. Long and short, the stories continued to haunt the pages of the newspaper in the years to come.

Summer 1884 appears to have been a particularly active season; perhaps the ghost stories of previous years had “encouraged” such a spike in activity. There were at least three stories in less than a month that summer. On June 9, the Rocky Mountain News described a Denver man who had been robbed and murdered on the road to Pueblo about ten years prior. Apparently, even after his murderers had been killed themselves, “travelers and cowboys...stoutly assert[ed] that the agonized death cry of the murdered man [could] be heard every night, echoing over the hills and through this gulch.”

On July 5, they published yet another long-form ghost story. After several paragraphs describing the beautiful countryside, the article gets down to it with “the legend of an old Indian chief and his daughter.” It is a story of star-crossed lovers, the chief’s daughter and a young white scout and the daughter’s tragic death while trying to save her lover. Evidently, if you go to Glen Pym you can hear “the old Indian chief bewailing the loss of his daughter and other and feebler cries as of an Indian maiden weeping for her lover.” 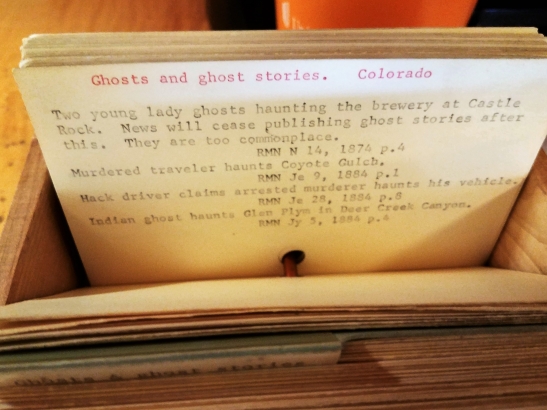 Perhaps the only truth that we can take from this self-acknowledged proliferation of ghost stories in the Rocky Mountain News is the universality of our obsession with these historic tales. Whether a 19th century reader devouring the story of a ghost haunting Georgetown or a 21st century reader wondering about the Changeling house, we all find ourselves drawn to these stories and these places over and over again.

This blog post was prompted by a chance encounter in WHG’s Western History Subject Index. This card file contains more than seven million entries on four million cards. What will you find when you take a look?