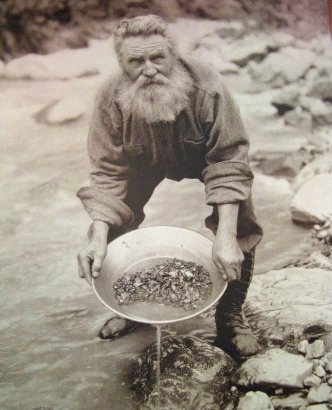 A line first made famous by Mark Twain’s character Mulberry Sellers in his novel The Gilded Age: A Tale of Today has been uttered by many a westerner when describing the precious metals that once colored the igneous rocks of the Rocky Mountain range. Tales of gold and hidden treasure are rife throughout the history of the Old West. Whether it is a legend of stashed loot hidden by Butch Cassidy’s Hole in the Wall Gang, Spanish doubloons left behind by the Conquistadors, or a hidden mine containing the Mother Lode, people have sought for these elusive riches without much success. In fact, there is very little validity to any of the multitude of tales surrounding these buried treasures.

In the Summer of 2010 Forrest Fenn, a New Mexico resident and decorated Vietnam War Veteran who made a small fortune dealing in Western Americana, buried a bronze chest full of jewelry, gold, and valuable artifacts somewhere in the American West. This trove is valued in the millions. To help eager treasure hunters, Fenn authored a memoir titled The Thrill of the Chase holding hints to the treasure’s whereabouts. Within the memoir, is a poem containing nine clues to finding the loot. Fenn also later published a map that shows the approximate area where the treasure lies (covering four states).

Here is the poem in its entirety:

As I have gone alone in there/And with my treasures bold/I can keep my secret where/And hint of riches new and old.

Begin it where warm waters halt/And take it in the canyon down/Not far, but too far to walk/Put in below the home of Brown.

From there it's no place for the meek/The end is ever drawing nigh/There'll be no paddle up your creek/Just heavy loads and water high.

If you've been wise and found the blaze/Look quickly down, your quest to cease/But tarry scant with marvel gaze/Just take the chest and go in peace.

So why is it that I must go/And leave my trove for all to seek?/The answer I already know/I've done it tired, and now I'm weak/So hear me all and listen good/Your effort will be worth the cold/If you are brave and in the wood/I give you title to the gold 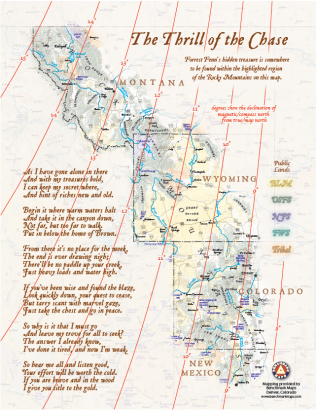 ​Inspired? Come to the Western History and Genealogy Department and study the vast collection of maps of these areas that date back to the 18th and 19th Centuries. See if you can find the “House of Brown” and solve the other clues in Fenn’s poem. While you’re there, look at some of Fenn’s other books and biographies and see if there are more hidden clues that may unlock the secret spot to one of the Wild West’s most sought after treasures.

What?! This is so cool! Bonus points for the education on the proper spelling of 'mother lode' - I always assumed it was 'load'. Great post!

Are there stories about anyone who has tried to find the treasure? Has anyone come close?

No one has come close yet but hundreds (if not thousands) have cast their lot to try and unearth the treasure. In fact, one unfortunate fellow actually perished trying to find it. http://www.people.com/article/forrest-fenn-speaks-out-missing-treasure-hunter

Hmmm... I haven't had much luck tracking down the Lost Dutchman mine. Perhaps it's time I set my sights on a new target...

How cool is this!

What an awesome story!