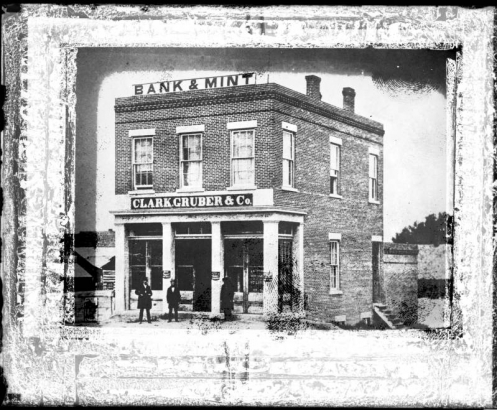 Most visitors to Denver are familiar with the Denver Mint on Colfax and Cherokee, but very few know about Denver's other mint.

During Denver's early days, a few entrepreneurs took advantage of frontier economics and, literally, printed their own cash and coins under the auspices of the Clark, Gruber & Co. Bank and Mint. The enterprise was legal and served an important role in keeping cash flowing in the newly birthed municipality.

Founded in July 1860 by Austin M. Clark, Milton E. Clark, and E.H. Gruber, the freelance mint was located on the corner of 16th and Market, then the center of commerce in the region. It was a fortress-like building that served several functions including bank, assayer's office, and money factory.

The idea was simple on its face: Denver was awash in the precious metals that were being mined in the mountains and extracted in frontier smelting plants. While plenty of local commerce was conducted using bags of gold dust, demand for cash and coins remained high. That's where Clark and Gruber's services came into the picture, according to Jerome Smiley's History of Denver.

Miners could deposit gold into the bank and receive a pretty impressive return of 10-25% on their deposits. The gold would be minted into coins; just $10 and $20 pieces at first, though $2.50 and $5 coins were added in 1861. Early iterations of the local coinage contained exactly the amount of gold that they represented, but later editions added about one percent extra to make up for the amount that would be lost to regular wear and tear. Much of the gold coinage was circulated locally, while the lion's share of the silver was sent to the "Orient" where demand was significantly higher than it was in the U.S.

Clark and Gruber's operation proved to be very popular, doing over $3 million worth of business in their first two years alone. They eventually added paper currency to their product line, and in 1860, opened a Central City branch in an effort to be closer to the action.

You mean you could just print up your cash back then?

The idea of local businesses just minting or printing up legal tender, whether backed by gold reserves or not, is pretty foreign to contemporary people. Private mints like Clark and Gruber's served a very useful function on the frontier. Besides giving prospectors—and the people they did business with—a place to safely deposit their earnings, they also helped establish financial norms and standards in the communities they served. A $10 gold piece from Clark and Gruber's was a reliable form of currency that could be used locally and transported to other parts of the country without losing value. In the absence of any sort of federal administrative apparatus in this far-flung corner of the Kansas Territory, that was a pretty good deal.

Clark and Gruber's coinage was even brought to Washington, D.C., by a delegation of Denver residents looking to make the area its own territory by showing how organized and civilized life was along Cherry Creek.

Of course good deals usually don't last forever and the federal government eventually moved in on private mints. In 1862, Congress approved a bill that would allow the government to purchase Clark and Gruber's operation and convert it into an official U.S. Mint. The next year, Clark and Gruber cashed out for $25,000 in gold coins from the U.S. government. Those coins, incidentally, were printed on the premises of their former place of business.

Clark and Gruber left the mint business, but stayed in the banking business opening up the First National Bank, an outfit that is currently operating as part of Wells Fargo.

In 1864, Congress passed a law banning private mints (just in case you were getting any ideas) and that was the end of the era.

Thank you for the wonderful piece of Denver history Brian!

Thank you for the kind words. Our blogging efforts always get a big assist from the strength of our collection and the skill of our editors! Glad you enjoyed it!

This is fascinating! I worked in banking over 40 years and don't remember hearing about this First Denver Mint. I knew banks had their own currency which bore their names - Koontz Family from Colorado National Bank, etc. Thanks for this wonderful story of Denver banking.

I Just saw a re-run of the tv show, The Old Ranger, I believe it was. The show is exactly as this says. Awesome the way they portray the story