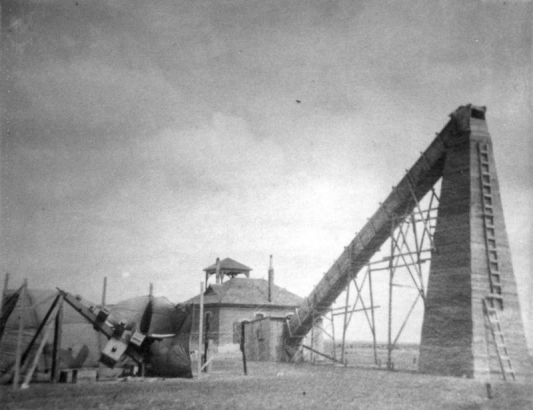 With today's solar eclipse, Americans of all stripes are finding a renewed interest in all things stellar. Most of the eclipse-watchers, however, will move on and aren't likely to keep up their interest in astronomy. Others will take things a bit further and push the limits of the DIY ethos like the citizens of Brandon, Colorado, did back in 1918.

Though it looks like a piece of mining equipment, the structure featured in this week's photo is actually a homemade telescope. The astronomical device both dwarfs, and is connected to, the town's one-room school house.

The story behind Brandon's foray into big league astronomy is, sadly, scattered deep in the recesses of the historical record, so we don't know much about its origins. As for the town of Brandon, that's also faded away considerably since 1918.

Located in Kiowa County, Brandon is all but deserted these days. According to the most recent US Census, Brandon's population had dwindled down to just 21 residents. These days, the population is so small that the town is usually listed as a ghost town.

At various points in the 19th and 20th centuries, Brandon did maintain enough economic activity to support a schoolhouse (and a telescope for Pete's sake!). But all that seemed to unravel when, according to our Western History Subject Index and the Rocky Mountain News, one of the town's large landowners lost six soil bank contracts. The soil bank program was a government entitlement designed to help stabilize commodity prices by paying farmers to not till their land. In this case, Wayne E. Tallman allegedly collected the soil bank money, while renting the land to other farmers.

From that point, Brandon disappears from the Subject Index, though Blecha's Colorado Place Names points out that the town's post office officially closed in 1963.

As for the fate of the telescope, or the story behind it, that information is still floating in the mists of history.