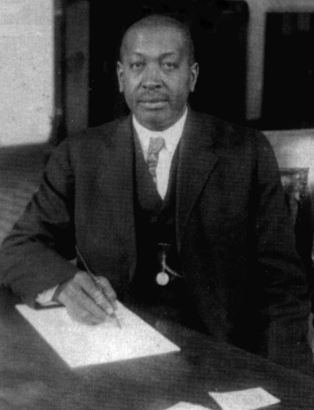 Oliver T. (Toussaint L’Ouverture) Jackson, was one of Colorado’s more intriguing characters. Born in Oxford, Ohio, in 1862, Jackson moved to Colorado in 1887, where he worked as a caterer in Denver, and then as a farmer. In 1909, while working as a messenger to Colorado Governor John Shaforth, Jackson took his idea for an African American colony to the governor. Governor Shaforth helped Jackson search for homestead land in Larimer and Elbert Counties. They eventually selected a tract in Weld County (25 miles southeast of Greeley on U.S. Highway 34) to establish a new colony. O.T. and his wife Minerva believed that in the course of years, capable farmers who were independent and self-supporting, would be the fruits of this new settlement.

In 1910, Jackson paid the filing fee for 320 acres in Weld County and began advertising for colonists. Late in 1910, a few early settlers from Denver and St. Louis were living on the land. Dr. J.H.P. Westbrook, a Denver physician and one of the first of the settlers, suggested the name Dearfield at a community meeting. His inspiration for the name was recorded as, “These are to be our fields and because they are ours, and because we expect and hope to develop them and make them into substantial homes, they will be very dear to us, so why not incorporate that sentiment in the name we select and call our colony Dearfield?”

The first actual year of the settlement was 1911, and in the fall of that year, seven families and three teams of horses were at the site. J.M. Thomas was the first settler in Dearfield. The families had little or no farming experience. They also were confronted by the natural conditions of the land. Their settlement lay above the river, where irrigation was impossible. They were forced to utilize rigid dry farming methods, which were unknown to them. Scratching out a successful and productive life was difficult for the early settlers, but little by little, these hardy and determined colonists learned how to cope with the elements and their own inexperience. They learned the lesson of moisture conservation, a key factor in sustainable non-irrigated farming. They also garnered expertise in the cultivation of livestock and poultry.

The Weld County News (November, 1921), proclaimed a colony of 700 people (60 families), with 44 buildings and improved lands worth about  $950,000 (according to O.T. Jackson), livestock and poultry worth $200,000, and their annual production of $125,000.  “It was a thriving community,” recalled former Dearfield resident Eunice Norris in a documentary entitled The Need, The Reality, The Dream. “There were a lot of parties, socials, picnics, fishing parties, card playing, basket suppers, songfests,” she said, “and everybody was happy.”

By 1940, Dearfield had a population of 12. A few deserted buildings still stand to remind visitors of its history. O.T. Jackson died on February 18, 1948.  In its heyday, Dearfield provided a needed solution to economic and racial problems for African Americans. It was a supportive social and economic community. Still today, Dearfield represents the determination of the African American community to have a path to independence and prosperity.

“Dearfield Is a Dream That Came True,” The Colorado Prospector, March, 1989.

“Jackson hustled a dream into reality at Dearfield,” by Peggy A. Ford, Greeley (Colo) Tribune, February 11, 1990. Credit for use: City of Greeley Museum.

Very informative! I had no idea. I will be sharing this information with my family. Thank you

It is so important to have access to history like this! Thank you preserving and sharing such an amazing part of Colorado's History.

Thank you for your comment. Colorado does have an amazing history and I'm happy to share it!

Thank you for preserving***

We are looking to learn more about the history of Black homesteaders in Colorado as part of a homeschool project, which has of course led us to Dearfield. Thank you for this information, and we are excited to visit and learn more!

Hi Amy - Thanks for reading and commenting! There are a lot of really great resources at DPL, including a lot of good material on Dearfield. Be sure and visit our Blair-Caldwell branch, too and don't hesitate to give us a call if you need any assistance!