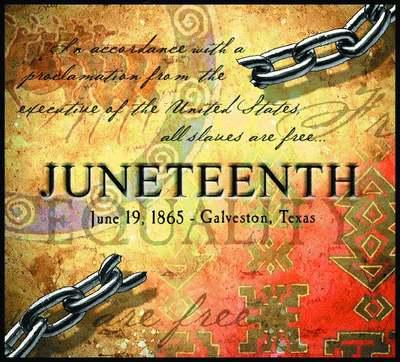 I recently bumped into a blog on “The Root” by Henry Louis Gates Jr. (literary critic, educator, scholar, writer, editor, and public intellectual), about African American historical facts and was intrigued. His blog series was inspired by Joel Augustus Rogers,(journalist, amateur anthropologist and historian) who in 1934 published 100 Amazing Facts About the Negro With Complete Proof: A Short Cut to the World History of the Negro. Rogers set out to debunk misconceptions of his that day that people of African descent contributed minimally to the world stage. This blog series is dedicated and inspired along the same thought stream.  I’ve set out to highlight contributions and achievements of individuals in the many spheres of society behind the popular and well known heavy hitters like Harriet Tubman, Martin Luther King, Jr, and Rosa Parks. Black History is American History to be enjoyed all year long.

Many residents around Denver took part in the annual celebration of Juneteenth this past Saturday (June 15th), in the historic neighborhood of Five Points. There was lots of great food, vendors selling an array of wares and live music and performances. From the outside Juneteenth appears to be just another summer festival, but is it? What is Juneteenth really about?

According to the National Registry: Juneteenth Organizations & Supporters website, “Juneteenth is the oldest known celebration commemorating the ending of slavery in the United States.”  President Lincoln’s Emancipation Proclamation - which had become official January 1, 1863, had little effect on slaves in Texas due to resistance and the small force of Union troops to enforce the Executive order. The life of a slave in Texas continued despite the fact that slavery had officially ended two and a half years prior. On June 19th, 1865 General Gordon Granger, led Union soldiers to Galveston, Texas with news that the Civil War had ended and slaves are now free. The combination of General Granger’s soldiers and the surrender of General Lee in April of 1865 finally overcame slave holder influence.

Today Juneteenth commemorates African American freedom and emphasizes education and achievement. It is a day, a week, and in some areas a month marked with celebrations, guest speakers, picnics and family gatherings. It is also celebrated all over the world. In Denver, the Juneteenth celebration began in the early 1950s and eventually grew to be one of the nation’s largest celebration of its kind in the 1980s. As economic and social challenges began to plague Denver in the early 1990s, Juneteenth’s image was negatively impacted due to violence during the festival. As a result, attendance and interest in the festival drastically declined.

In 2012, the Juneteenth Music Festival LLC was formed by a group of entrepreneurs who recognized the opportunity to reinvent the image of Juneteenth and rebrand the celebration to the city of Denver. Under new leadership Juneteenth is committed to “engaging the community with the historical significance of Juneteenth, while creating a framework for economic and educational empowerment in youth and adults. The Juneteenth Music Festival facilitates events which support redevelopment and elimination of financial blight in Denver, Colorado’s Historic Five Points Neighborhood.” Through the efforts of local community resource organizations, city agencies, corporate and individual sponsors and donors the festival has evolved and taken on new life and vibrancy.

Juneteenth is NOT just another summer festival...but a way to celebrate a historical transition that officially declared a final and resolute bon voyage to chattel slavery in America.