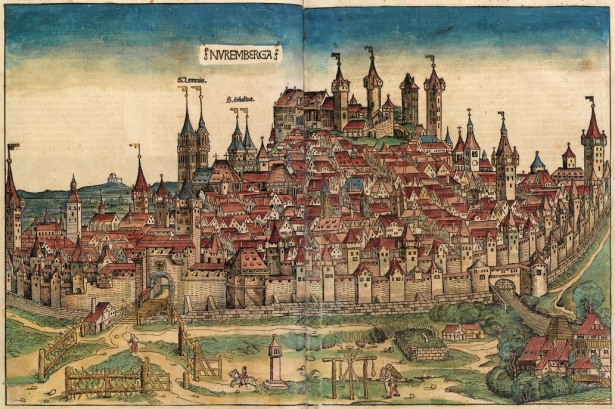 Many of us grew up with a Time-Life Almanac sitting around the house. Fun for browsing, it also served as a solid reference source for basic statistics and historical facts. People were generally expected to own something like this as a handy reference.

If you were a wealthy German noble in the late 15th century, you could say the same thing about the Nuremberg Chronicle. Published in 1493 in the prosperous city of Nuremberg by Anton Koberger, in what was then the Holy Roman Empire, the Chronicle portrays Biblical history as well as histories of major European cities of the time. But even beyond its patently lush typography are the illustrations and maps, which according to Adrian Wilson's The Making of the Nuremberg Chronicle includes woodcuts that a young Albrecht Dürer, Koberger's apprentice, likely helped to prepare. Both German and Latin editions were produced.

Among the unprecedented 1,809 woodcuts included in the Chronicle is a world map entitled Secunda Eras Mundi (You Were Made in Accordance With the World), created by Hartmann Schedel before Columbus had returned from his first voyage to the Americas. Schedel instead based his map on the work of famed 2nd century geographer Claudius Ptolemy. This map has, on the left-hand side, mythical and bizarre depictions of other races. The Chronicle, opened to this map, is on exhibit in the Western History and Genealogy Department at Denver Public Library through July 1, 2016. It's part of the Rocky Mountain Map Society's celebration of Map Month, complete with map exhibit and lecture series on Illusions, Delusion, & Confusions.

If admiring beautiful cartography and learning a bit more about how much we're constantly learning about our world interests you, we encourage you to explore the exhibit and attend the lectures, held in the B2 Conference Center at Denver Public Library's Central Branch.