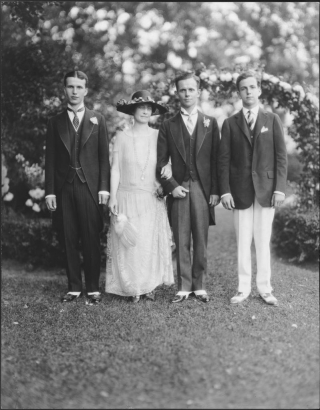 In preparing his new city editor, Denver Post owner Harry Tammen is quoted as saying, “You’ve seen a vaudeville show, haven’t you? It’s got every sort of act - laughs, tears, wonder, thrills, melodrama, tragedy, comedy, love, and hate. That’s what I want you to give our readers” (Thunder in the Rockies, by Bill Hosokawa). The Denver news landscape at the turn of the 20th century was a wild-west of its own sort. Scandalous stories graced the headlines, editorial crusades were launched from the pages and national and international stories found themselves strange bedfellows to the surprisingly local color. As we celebrate Valentine's Day at the end of this week, here is a round-up of some of the strangest wedding stories to grace our desks. 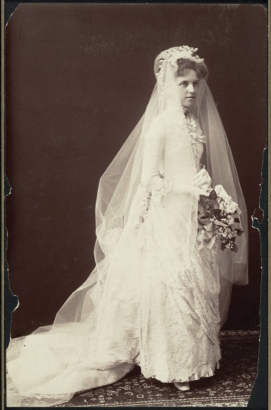 One of the most intriguing things about being a reference librarian is the random stories that grab your attention. That was the case with this headline (and the sub-headline “Bride-Elect Finds He Has Only 90 Cents and Forsakes Him Forever”), which was found while hunting for a completely unrelated article.

In just a few column inches, this “special to the news” article from Trinidad described a couple that traveled from Las Vegas to get married until they learned of the $2.50 cost for a marriage license. When the groom turned to his bride for a “loan” to make up the difference, she abruptly broke the engagement and declared that she “‘hoped she would never see him again.’” These sorts of short stories seem to be peppered into the papers, providing a little lightheartedness and local color.

1907
Evalyn Walsh (holding puppy) the year before her marriage, the first time Taft was there, in 1907, Wolhurst, Colorado.

The January 1900 wedding of Arthur Carper and Katie Hamilton was felled in a similarly last-minute fashion, but definitely not by a lack of funds. A January 5, 1900, article from the Denver Post described the hullabaloo that erupted at 1413 South Tremont when the groom’s father called it off just half an hour before the nuptials were to take place. Evidently, after weeks of wedding preparations for the “swellest of the swell things of the season,” he had decided his son was too young to be married, and, as the father of an underage groom, he could deny them the license.

According to the article, the bride’s parents decided to continue the party even without the marriage, not breaking up until after midnight. The couple “talk[ed] strongly of an elopement….that they would go to Cheyenne for their marriage license.” Luckily, we can further follow this love story by digging into the genealogical sources. Using the Colorado Marriages Index, we see that Arthur and Katie did not ultimately elope to Cheyenne, but rather married in Denver in March of that year. We did not locate a newspaper article describing the March wedding, but there is a marriage notice in the March 18 issue of the Denver Post.

Unfortunately, the marriage was not made to last. By the 1910 census, Kate was claiming herself as widowed, though in December of that year a divorce notice appeared in Franklin’s Paper the Statesman. No explanation was included. Kate remarried in 1915, this time to Mr. Robert Ellsberry. Apparently still scarred by the 1900 debacle (or perhaps just tired of all of the pomp), this ceremony was a small affair, at which “only the intimate friends were privileged to be present” (Denver Star, January 30, 1915) 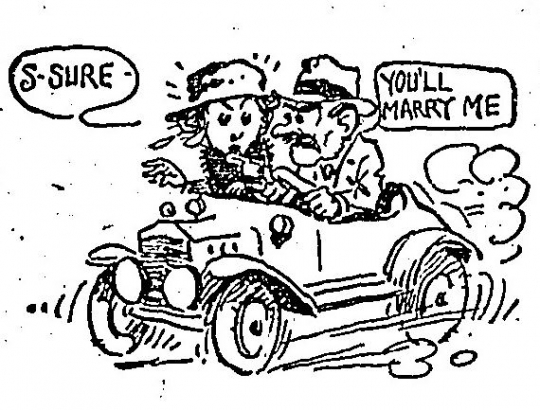 Yet, somehow, neither of these ordeals seem to come close to that of Miss Martha Daiss, 21, of Denver. In late November 1921, Daiss was abducted at gunpoint by her neighbor Oscar M. Farber, whom the Denver Post regularly compared to a caveman. After what must have been a very frightening 24 hours, Daiss was able to escape her captor by throwing a note from the the hotel room in which she was confined. She was rescued and Farber, who was in the room across the hall, escaped in his car.

According to him the whole thing stemmed from Martha consistently putting off their already-agreed-to engagement. “‘Martha told me she would marry me last July. We had been engaged since that time. I spent $400 buying her clothes, shoes and the like for her trousseau. She kept putting off the wedding. We were to be married Thanksgiving; then she said ‘wait until April.’” (“Girl’s ‘Cave Man’ Wooer Bewails Blasted Romance and Shame he Must Face” Denver Post, Dec. 1, 1921)

Daiss had a different story. “‘Farber wanted to marry me, but I couldn’t see it that way,’” she said, in a stroke of understatement. “‘Any girl likes to have something to say about whom she is going to marry, and when a fellow tries to slip something over like Farber did - well it simply can’t be done.’” Apparently, it could be done, however. Though Daiss’s story was told as far away as the Chaffee County Democrat, Farber was acquitted when Deputy District Attorney Lewis Cowrey decided that Daiss was complicit in her own kidnapping. It was only after Daiss’s family complained of threatening letters that a “lunacy commission” became involved and recommended his commitment to the state hospital.

Love and Marriage in the Denver Papers

These are just a few of the countless articles on failed love, from the absurd to the sad to the frightening. Some disappeared, while others yielded lawsuits. Some of these stories and figures can be tracked, as in the cases of Kate Carper and Martha Daiss, while others are just a flash. Yet, we can imagine that for those struggling to get by, a little story about love gone wrong may have done the trick to make the day go faster.

Perhaps there is no other way to end this recounting than with another quote from Tammen’s speech to his editor: “If a thing is horrible, explain why it is horrible and leave nothing to the reader’s imagination. Nothing is too trivial to interest some reader, and never forget this: that more people are interested in a man’s falling and breaking his arm on Curtis Street than are interested in a disaster in Egypt or China.” Whether for good or ill, some things never change.