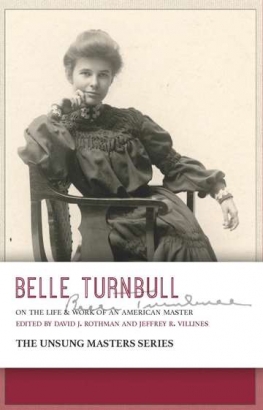 In 2012, when I was teaching at the University of Colorado in Boulder, Patty Limerick, the Faculty Director of the Center of the American West, invited me to deliver a lecture on "The Poetry of the American West." In my talk, I wound up focusing on Colorado, which has inspired great poems by Longfellow, Whitman, Katherine Lee Bates ("America the Beautiful"), Robinson Jeffers, Thomas Hornsby Ferril, Dave Mason, and too many other strong contemporary poets to name. After the talk, at a reception in the home of the writer Janet Robertson, she asked me why I hadn't talked about Belle Turnbull (1881-1970) -- to which I replied it was because I'd never heard of her. Janet introduced me to her work -- fairly well known in her lifetime, but completely forgotten now -- I became convinced of her substantial artistic significance, and that led me to her papers in the Denver Public Library.

Belle Turnbull was born in Hamilton, New York, on December 9, 1881. At the age of 9, her family moved to Colorado Springs, Colorado, because of her father's health. Her father, George Butler Turnbull, became the principal of Colorado Springs High School. Turnbull graduated from Vassar in 1904 [1903?]. She took a job teaching at Westfield High School in western New York. Then in 1909, she taught at an all-boys' school in Buffalo, New York. In 1910, Turnbull returned to Colorado Springs to teach English at Colorado Springs High School until 1936. In 1937, Turnbull retired from teaching and moved to Frisco, Colorado, with her friend [...presumably a euphemism...], fellow poet and author, Helen Rich. Two years later, they moved to a cabin in Breckenridge, Colorado, where they remained for the rest of their lives. During World War II, Turnbull worked as a clerk typist for the War Price and Rationing Board in Breckenridge. She resigned in 1944 to devote all of her time to writing. Turnbull started writing poetry as a child. By 1933, she had a number of poems published in the Saturday Review of Literature. In 1938, Turnbull received the Harriet Monroe Memorial Prize from Poetry: A Magazine of Verse. In 1940, she published Goldboat, a mining saga told in verse. Turnbull published a prose novel, The Far Side of the Hill, in 1953; a book of verse, [The] Tenmile Range, in 1957; and another poetry book [actually, just a chapbook], Trails, in 1968. Turnbull died in November 1970, in Denver, Colorado.

Turnbull has not received her due as one of the strongest early poets of the region, especially of the mountains. Indeed, she is far more than a strong regional voice. Her work is the first great poetry of the American alpine sublime. For her, the Colorado mountains -- their flora and fauna, their geology, their weather, and the people who live and work in them, very much including a detailed understanding of the work of hard rock mining -- are a source of endless awe and terrific power, and she was perhaps the first to capture that awe and power in an original and memorable way. In her work, as she put it herself, the mountains are not mere objects of fancy or sentiment, but at the core of her imagination, far more than mere scenery and definitely not simple or just pretty. As she writes in the first poem of The Tenmile Range, "Foreword":

Needs must harry the Tenmile now:

Hot in the channels behind the bone

The words are up and the drum beats over,

The drum beats over, the words must go.

Never along that range is ease:

Things are warped that are too near heaven,

Ink runs clotted down the pen,

Verse has the twist of timberline trees.

The interesting thing here is that Turnbull does not overtly describe the mountains, but only talks about the "needs" that "harry" them -- and of course those needs are not the mountains' needs, but rather her own, specifically her desire to express what they are, in words that beat in her blood like a drum. And yet, as she acknowledges, even with such awareness there is no ease, and her words are not enough: "Ink runs clotted down the pen." At the same time as she evokes the mountains, it is this cunning failure -- a refusal merely to describe them or sentimentalize them -- that evokes their sublime beauty and power. This is truly strong work, able to contain intense feeling, tremendously ambitious and sophisticated at the same time as it addresses primal life in the Colorado mountains, and she writes at this level, or even higher, again and again.

Convinced by these arguments about Turnbull's literary significance, Pleiades Press invited me and my co-editor Jeffrey Villines, to edit a new book that brings much of Turnbull's poetry and some of her prose back into print, some of it for the first time. Relying heavily on archival material from the Denver Public Library, the book includes not only extensive selections from Turnbull's books, but also previously uncollected and unpublished poems, prose, and even notes from her meticulous, beautifully-written scrapbooks.

Belle Turnbull: On the Life & Work of an American Master is the latest volume in Pleiades Unsung Master Series, and also includes original essays by George Sibley, Susan Spear, Uche Ogbuje and Dave Mason, all gifted Colorado poets and writers. We are deeply grateful to the press and to the Denver Public Library for the opportunity to bring this great poet of Colorado back before the public. You can also hear an interview of David J. Rothman by Andrea Dukakis of Colorado Public Radio about the book here.

David Rothman is the director of the graduate program in creative writing at Western State Colorado University, and CPR poet-in-residence.

Wonderful to discover a Colorado poet, almost forgotten, who spoke so powerfully of place. Thank you Janet, David and Jeffrey for bringing her back to us...

This is terrific! As you know, I love the poet and the book.