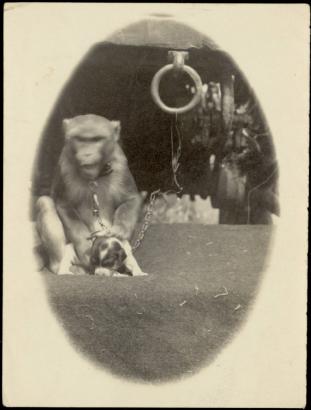 The National Western Stock Show Rodeo features some of the top cowboys (and cowgirls) in the world showing off some amazing roping and riding skills on the dirt of the arena.

Strangely, and gloriously, not all of these cowpokes are of the human variety.

When Did Monkeys First Ride Dogs?

Of course all this monkeying around begs the question, "What are monkeys doing riding dogs in rodeos in the first place?"

The available scholarship on monkeys riding dogs is remarkably bare. Our collection here at the Western History & Genealogy Department does, however, give a glimpse at the possible origins of the simian/cowboy connection.

The monkey, and dog, pictured at the top of this page were members of Sells Floto Circus and Buffalo Bill's fabled Wild West Show, which was the genesis of most modern Western-themed entertainment.

Unfortunately, there's no evidence to suggest that this particular monkey ever rode the puppy at his feet. Though we don't know for certain, it's most likely that he was an organ grinder monkey who participated in the parades that normally accompanied the show's arrival in a given town.

From Buffalo Bill to the mid-1980's, the historical record regarding rodeo monkeys riding dogs is vague at best.

We were able to come up with an article from a respected journal called, People Magazine dated August 25, 1986 which details the exploits of two rodeo monkeys name Cisco and Pancho. These two Illinois-based Capuchins rode Border Collies, the preferred breed of dog-riding monkeys, and had been active for some time when the article was written.

The monkey's owner, Randy Steffan, says that he got the idea from seeing a similar act performing in Texas. People also mentions that at the time the article was written there were at least three other similar rodeo monkey acts operating in the United States.

This writer can personally attest to the fact that there were dog-riding monkeys operating in the United States as early 1975. At that time I attended a rodeo in Longmont, Colorado, which included a wonderful Capuchin who rode a dog (breed unknown); wore a small cowboy hat and vest; and left a lasting impression on a wide-eyed boy.

Like so many other arts and sciences, dog riding has evolved considerably since the 1970s. Today's rodeo monkeys, as exemplified by the well-known Team Ghost Riders crew that's a mainstay on the modern rodeo circuit does a lot more than just ride dogs. This well-regarded team of Capuchins and Border Collies not only ride together, they actually herd goats together.

Though skeptics may suggest that the dogs, border collies, are doing most of the work, we'll leave the final assessment in the hands of anyone fortunate enough to see Team Ghost Riders in action.

Is This Practice Cruel?

While dog-riding rodeo monkeys are clearly a popular feature on the rodeo circuit, not ​everyone is a fan of this kind of dog and pony show.

People recognize that this is something that is not enjoyed by the monkeys and in fact is likely very frightening for them and can possibly cause them real harm.

Over at the Oakland Zoo, Primate Keeper Kristin Mealiffe says rodeo monkeys are in danger and would like to see the practice outlawed entirely:

There is no question this is an animal welfare issue. These monkeys are being placed in a stressful situation where they could be seriously injured or killed.

Not surprisingly, the men and women who operate the troops of range-riding Capuchins have a different perspective. Team Ghost Riders owner Tim Lepard told ESPN.com he couldn't force the monkeys to ride dogs even if he wanted to.

Pancho and Cisco's owner says his Capuchins were always better off than zoo animals adding:

You go to a zoo and see monkeys in cages, and they're bored all day long. Not my monkeys. My monkeys go for rides and get to see the country.

Despite criticism from animal rights advocates, it doesn't appear that dog-riding rodeo monkeys are going away anytime soon. They'll definitely be a part of the National Western Stock Show this year and, most likely, for many years to come.

Though the origins of dog-riding monkeys may be lost to the mists of time, their popularity as part of the quintessential expression of western showmanship, the rodeo, isn't particularly surprising. The Trans-Mississippi West has long been populated by entrepreneurs, and animals, who develop crowd-pleasing acts that are uniquely American.

Awesome post, Brian! This history buff loves the peek at a unique piece of Americana - and your storytelling style is delightful - especially the cheekiness! Keep 'em coming!

Thanks for the kind words Sandra! We're very fortunate to have a nearly endless source of really fun content here at WHG!

Hi, Brian. Thanks for the history. Of all the "acts" at the NWSS, this was the most memorable.

Thanks Betty! Those dog riding monkeys are pretty amazing.

much rather see the dog in a happy home and the monkey in it's natural habitat! Instead of cowboys and cowgirls amusement! Animals used for 'sideshow' or amusement were treated terrible... Tish, tish

I have to agree that this particular monkey looks pretty miserable in this photo, but can't speak to how he was treated overall. My general takeaway from researching this article is that monkeys are, generally, better off in the wild, but modern rodeo monkeys seem to be treated pretty well and develop close bonds with the dogs they ride.