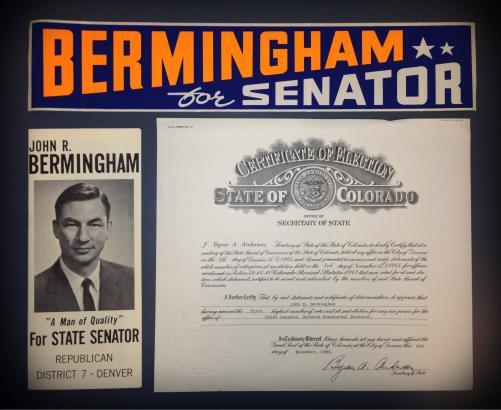 The papers of John R. Bermingham, a former Colorado State Senator (1965-1973), are now available for research in DPL’s Western History and Genealogy Department.

These papers will appeal to researchers interested in the history of Colorado’s abortion, birth control, and pollution laws, as Bermingham authored several bills on these issues during his senatorial career.

In 1967, Bermingham and State Representative Richard Lamm co-authored a bill (Colorado House Bill 1426) that expanded Colorado’s abortion law to include pregnancies that posed a mental or physical risk to the child as well as those pregnancies that were the result of incest or rape. With the bill’s passage, Colorado became the first U.S. state to liberalize its abortion laws.

In addition to abortion legislation, Bermingham sponsored legislation to preserve open space and to place controls on air and water pollution, radiation hazards, and solid waste disposal. He was also responsible for the development and passage of reforms to Colorado’s criminal and probate codes.

While the bulk of this collection relates to Bermingham’s legislative work and political campaigns, it also details his interest and involvement in policy pertaining to state, national, and global population issues. Items in the collection include correspondence, news clippings, bumper stickers, legislation drafts, photographs, a scrapbook, and more.