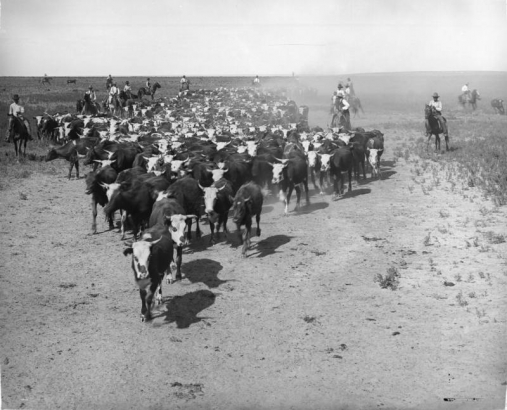 Every year, the National Western Stock Show reminds Colorado residents of our not-so-distant links to romantic images of the American West and the rugged cowboys who herded cattle across the range.

Finding authentic depictions of what life was really like for these men, however, can be fairly difficult. After all, the story of the West has long been draped in myth, misconception, and flat-out lies for more than a hundred years.

Early dime novel writers, and even people who experienced the opening of the West first hand, like Buffalo Bill, can not always be counted on to deliver the real story of how cowboys lived. One voice that western historians agree does provide an accurate account of cowboy life is that of Colorado author, Andy Adams.

Adams, an Indiana native who left home in his teens to head west, is the author of the seminal cattle drive novel, The Log of a Cowboy: A Narrative of the Old Trail Days. This book was based on the eight years Adams spent herding cattle in Texas before settling down in Colorado Springs, where he died and is now buried.

His legacy lives on in the praise that's still heaped on his work by western historians and enthusiasts.

The Log of a Cowboy opens during Sherman's March, as Tommy Moore, its young protagonist, protects his family's livestock against marauding Union Army foraging parties. After the war, Moore and his father head to Texas for a cattle drive that transforms his life and turns him into a real cowboy.

The rest of Moore's story tells of a life spent herding cattle and was largely drawn from Adams' own experiences on the open range. Nearly every chapter of The Log of a Cowboy walks readers through the daily challenges cowboys faced in keeping their herds together, and alive, as they crossed the open prairie, in a voice that's both intelligent and readable.

Adams' ode to authentic cowboy culture was published in 1903, when the life he described had all but passed into history. While he was loathe to write an epitaph to range-riding cowboys, he was determined to counter the inaccurate and overly-romanticized depictions of the American West that have always been common in popular media. He was quoted in the Colorado Springs Gazette as saying, "I don't know anything about fancy writing anything more than I know about this fancy riding you see in the pictures."

Despite his disdain for cowboy lore, Adams himself was definitely the archetypical American cowboy. Besides his experience herding cattle and sleeping under the stars, Adams was something of a loner and lifelong bachelor.

DPL's Western History/Genealogy Department is fortunate to have a small collection of Adams' papers that shed a little insight into the rugged individualism that made him such an authentic western voice.

Tho his death was unexpected by his friends, he himself seemed to have a premonition that the end was near. Only a few days ago, when informed in the course of one of those short walks he was in the habit of taking daily, that his health appeared to be improving, he smiled and asked, 'Do you really think so?,' Then he shook his head. 'The old pump's worn out,' he said, 'They'll have to junk it one of these days.'

In today's parlance, Adams was definitely one who, kept it real, right up to the very end.

Adams is just one of many Colorado writers whose works are housed in our Colorado Authors Collection. This collection includes everyone from Indian poet Linda Hogan to Gonzo journalist Hunter S. Thompson and plenty of cowboy authors (both authentic and "fancy").

Are you a Colorado author with a book you think should join these works? Drop us a line at history@denverlibrary.org.

I love history, the Colorado Cowboy is another example of local history that enlightens us to how the state became a wonderful place to liv and raise a family!

Thanks for the kind words Mary Ellen!