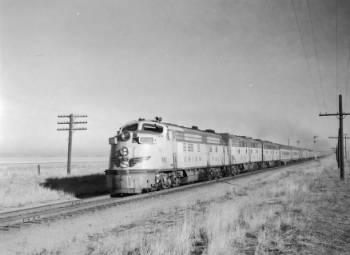 Check out the wonderful new exhibit at the Colorado Railroad Museum!

Today's blog post is by Lauren Giebler, Curator of the Colorado Railroad Museum. She describes a great new exhibit at the museum that gives you a window on what it was like to work and ride in passenger cars and trains in the 20th century. For more information about the blog photograph, click here. The Colorado Railroad Museum has a vast amount of photographs and other materials in their library. And remember, we have a large collection of railroad photographs in the Digital Collections.
Life on Colorado Rails: The American Passenger Car Era, 1930 to 1970
By Lauren Giebler

Opening May 18, 2013, Life on Colorado Rails 1930 to 1970 is the second of three exhibits celebrating the work and lives of railroadmen and women in Colorado. From sleeping car porters to carmen; courier nurses to conductors; engineers to yard officers, this exhibit highlights the modernization and glamour of Colorado railroads from 1930 to 1970.
The modern American Passenger Car Era began in the 1930s when railroad companies transitioned from steam to diesel locomotives, and changed to look of their trains in an effort to attract more passengers. Inspired by the Art Deco movement, railroads applied clean, unbroken lines, rounded corners, and gleaming metal bodies to trains and locomotives. Projecting an image of speed and power, the new trains symbolized the modernization of America.
Trains like Atchison Topeka & Santa Fe’s diesel-electric Super Chief ran faster than ever. In 1937, the Super Chief cut the average travel time between Chicago and Los Angeles from 55 hours to 39 ¾ hours, and became known for its first-class service and fashionable clientele. Employees had to have many years of experience before they could work on that train. As Sam Turner, a second cook remembers,
“[The Super Chief] was Santa Fe’s crack train, and you was proud to work on that train. You worked hard on there, but you learn how to cook many different things ‘cause they had the most fanciest things in the world. All those filet mignons, those sirloin steaks. You had a lot of turkeys to cook, and dressing. Prime ribs. Cornish hens. You had those trouts, and you had to bone those fishes out. You learned a lot on there. You didn’t have no canned goods or nothin’. No, you had to bring it up from the nub. If you had string beans, you had to take a knife and French-cut ‘em and then put your almonds in there and cook it up. You just had so much to do, but you had to do it from the nub”.
Sam was proud to work for the railroads, and for good reason. The Passenger Car Era marked the zenith of American railroading not just because the rolling stock was modern and luxurious, but because many railroad employees enjoyed their working experience. Strong wages, standardized working hours, health insurance, pensions, and respect from surrounding community members created desirable and satisfying jobs.  It was not uncommon for employees to work thirty, forty, or even fifty years for the same railroad company.
Join us this coming May as we celebrate the men and women who kept the railroads running during the American Passenger Car Era! View photographs of porters, cooks, stewards, courier nurses, engineers and more. Explore a three-quarter sized Navajo round-end observation car complete with a sleeping berth and check out new Museum objects on display. We hope to see you there!