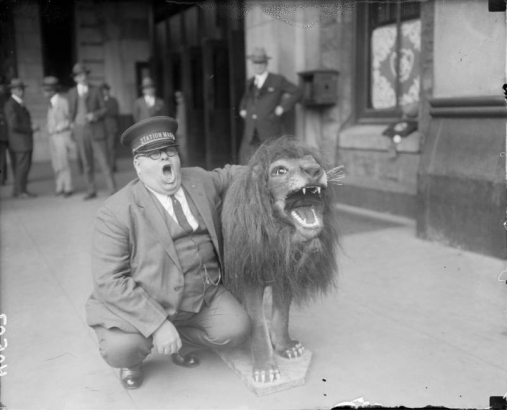 What's actually depicted here is the station master at Denver's Union Station, (and yes, he does bear a striking resemblance to the late Chris Farley) posing with a gag lion. Pretty much everything we know about this picture, that the man in the picture is the station master and that the lion isn't real, we know from the title of the picture which is, Station Master with gag lion. By the looks of the photo, our catalogers surmised that it was taken sometime between 1915 and 1930, and that's all we know for certain.

Our opinions, on the other hand, are another matter entirely. In that regard, we love the overall fun and silliness exhibited by the station master and would sure like to see a whole lot more silliness of this sort.

Do you remember the gag lion at Union Station? If you do, we'd love to hear from you. Post up your memories on our Facebook page, or in the comments section below.

Anyone reading this with kids aged 7 and under is probably thinking..."look, it's Sir Topham Hat!"

Yes! you are so right!

I read there was more Denver passenger traffic by rail than air until 1959.

Very nice! I remember the trains, it's my understanding are now housed the White Fence Farm Restaurant in Lakewood. Thanks for sharing with us!