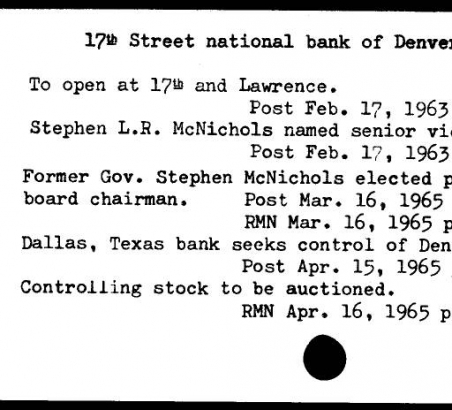 The General Index is a unique tool for Denver and Colorado history and biography. Researchers in the know often go slack-jawed or misty-eyed when they realize what they've discovered...

Known by staff and researchers as the GI, it is an index of about 6.5 million entries on 1 million cards to previously un-indexed local and county histories, biographical works, some manuscript material, and western journals and serials. It makes accessible the otherwise inaccessible. Researchers in the know often go slack-jawed or misty-eyed when they realize what they've discovered.

In 1935, the newly created Western History Department acquired an index of local subjects begun by the Reference Department. With this base, new subject headings were added to broaden the scope beyond Denver and the established headings were refined. Then, in the midst of the Depression, the Western History Department benefitted from a federal stimulus: a Colorado Works Progress Administration (WPA) grant to index in detail the Rocky Mountain News, 1865-1885. The result? An every-name index for the premier Colorado newspaper of the day for a more than twenty-year span.

In the years that followed, the Department's staff continued to index contemporary newspapers, journals, and some standards of Colorado history, while also adding retrospective sources such as the Denver Times, 1872-1913. The General Index closed to additional entries in 1995.

Still housed in its original wooden card catalog cabinets and situated across from our reference desk, the GI is available to all visitors to the Department. The entire General Index has been digitized, and can be searched online here.

An Ode to the General Index

Among the treasures of the Denver Public Library, few rival the massive General Index in the Western History Department. This product of more than a half-century’s work, if recreated at current costs, would be worth $2 million or more. An index of an estimated four million entries to articles, books, newspapers, and other material, it is an outstanding contribution to scholarship - a college in itself. Without it scholars would be impaired and devotees of well-researched local history would be impoverished. Without it the Denver Public Library would be a far less splendid institution that it is. All hail to the generations of librarians and Denver taxpayers who have supported, built, and maintained such a superb research tool.