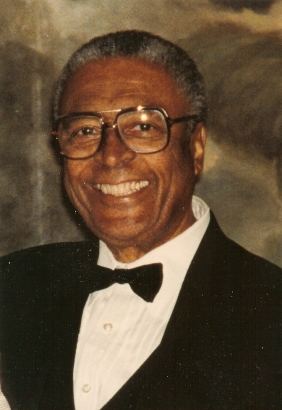 Brown was born on July 1, 1926, in Lawrence, Kansas. He was a star athlete in basketball, football, and track - all before graduating high school in 1944. He served in pilot training with the Tuskegee Airmen toward the end of World War II.

In 1950, Brown earned a journalism degree from the University of Kansas and did graduate work at the Harvard Business School, the University of Colorado, and the University of Denver. Brown moved to Denver where he worked as a reporter and editor for The Denver Post before entering politics. In the early 1970s, he was the director of Denver's Housing Authority, and was credited with improving social conditions for minorities in Denver.

In 1955, Brown made history when he was elected to the Colorado House of Representatives. He was later elected to the state Senate, where he served 18 years, and was reelected to five consecutive four-year terms. He continued working for The Denver Post, covering the Civil Rights Movement during the 1960s. While he was serving his fifth Senate term, he was elected lieutenant governor of Colorado, a position he held for four years.

Brown's political tenure in Colorado was blemished by controversy in 1978, when he pardoned a friend who had been convicted of murder, while Governor Richard Lamm was on vacation. The governor revoked the pardon when he returned. An oversight budget for Brown's office was also a source of friction between the governor and Brown. Brown dropped from Lamm's reelection ticket in 1978. Brown described the office of lieutenant governor as "a very frustrating position in a number of ways," as reported by Matt Schudel, Washington Post, April 7, 2006.

In 1979, Brown left Colorado and joined the Grumman Corporation, where he was later promoted to senior vice president in charge of the firm's regional offices, becoming the first African American corporate officer in a major U.S. aerospace company. He left Grumman in 1990.

After Grumman, Brown held a variety of managerial and consulting positions. He also served on several boards and was advisor to numerous organizations and companies.

The History Makers, at http://www.thehistorymakers.com/biography/honorable-george-l-brown.

I knew Lt. Gov Brown and his daughter who attended CSU. She was a great person— I often think of her although her name escapes me now. I remember she married the love of her life she met on campus, Ricky. Her dad was a wonderful man as well. He lived over by the golf course on 26th—now destroyed thanks to gentrification under the guise of a possible flood in 100 years. I also remember very well how the governor treated Lt. Governor Brown. The same way Lt. Governor Rodgers years later was treated by then sitting governor of Colorado. It was really shameful and I’m certainly not going to act like it didn’t happen.

Juanita (my youngest sister is also a Juanita), thank you for your comment. You were lucky to have known Lt. Governor Brown and his daughter. I appreciate your honesty.

Dr and Mrs John F Bookhardt had invited me to Move To Denver Colorado where I was Proudly impressed of the History Of Lt Govenor George Brown who served with Govenor Richard Lamm ! Trail Blazers In Modern American West History;

Kevin,
Thank you for your comment. Lt. Governor was indeed a trail blazer in modern American Western history. He is still appreciated for his contributions and leadership in Colorado.

My Daughter lives there Now a Outstanding Emmy Award Winner Of Colorado Public Television⭐️And Serves The Hancock Administration City Of Denver! James West is Her Husband they just had a Baby Boy Journey James West⭐️❤️