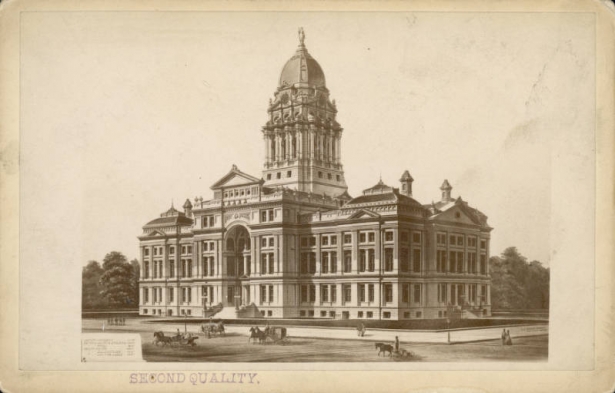 When a customer emailed us to ask a seemingly simple question - who was the first African American lawyer in Colorado? - we found that sometimes the easy question does not have an easy answer. Assigning firsts is a tricky business and yet it seems to be a part of the human condition. Just as people are constantly breaking out of the specific categories that we try to apply to them, we continue to apply categories all the same.

We ultimately came down to two possible contenders (though there are likely others). The first, Samuel Eddy Cary, is often referred to as the first Black attorney in Colorado. Cary graduated from Washburn Law School in Kansas and moved to Denver in 1919. He was admitted to the Colorado Bar in October of that year and set up a criminal law practice in Five Points. Additionally, he is the namesake of Colorado’s bar association for African American lawyers. Easy, right? Not so fast.

As we dug deeper into this question, we found a complication. Emancipation: the making of the black lawyer, 1844-1944 by J. Clay Smith lists a whopping four African American attorneys in Colorado before Sam Cary. They are Edwin Henry Hackley, Joseph Stuart, Thomas Campbell, and George Ross. While all of these men warranted further research, we figured we’d focus on Hackley; we were, after all, looking for the first.

Despite a bevy of successes and important connections, Edwin Henry Hackley is remarkably hard to pin down at first blush. Luckily, there is one short book about his life by Lisa Pertillar Brevard, A Biography of Edwin Henry Hackley 1859-1940: African-American Attorney and Activist. By correlating Brevard’s work with genealogical tools in the WHG toolbox, we were able to develop a fairly full picture of this elusive figure.

Edwin Henry Hackley was born on September 11, 1859, in Romeo, Michigan. He was a sickly child, especially after a bout with lung fever that left him forever looking for quality air (a search that would ultimately lead him to Colorado).

His first census appearance that we were able to track down was in the 1870 Federal Census, in which he was listed as the 11-year-old white son of a barber. Maybe he wasn’t truly African American? Not so fast. Seasoned genealogists know to take any individual census record with a grain of salt. By 1880, the same family was all marked as “mulatto,” suggesting that they might have been lighter-skinned or multiethnic. According to Brevard, Hackley’s family was part of the Black middle-class and his later endeavors would seem to verify that he at least identified as African American.

In the early 1880s, he enrolled in the University of Michigan law school. Despite a battle with tuberculosis that forced him to learn remotely, he completed his degree and sat for the Michigan bar exam in 1883.

Maybe he wasn’t barred in Colorado? Alas, Hackley applied for admittance to the Colorado State Bar in 1883, apparently with every intention of practicing law in the state. According to the index of Colorado Bar Admissions, available through the Colorado State Archives Search, Hackley was licensed on June 7, 1883, the 136th man admitted to the bar.

Hackley finally fully moved to Colorado three years later in 1886 to take a position as Denver County Clerk. He then moved up to Abstract Clerk, a position he would hold for nearly 14 years. According to Brevard, Hackley also argued some cases in court, but the money wasn’t there and so he closed his practice.

According to the Denver City Directories for the late 1880s and early 1890s, he worked as both (or either) a clerk and a lawyer until 1892, when he took over as editor of the Statesman. Though struggling, the Statesman (later Franklin’s Paper the Statesman and ultimately the Denver Star) was one of the major African American newspapers in Denver at the time. An 1899 American newspaper directory listed the paper as follows: “Saturdays; negro, republican; four pages 18 x 24; subscription $2; established 1889; Edwin H. Hackley, editor; Statesman Publishing Co., publishers; circulation ‘JKL.’”

In 1894, Hackley returned to Michigan to marry Emma Azalea Smith, a talented singer and teacher whose star would ultimately outshine her husband’s in many ways. Edwin and Emma Hackley returned to Denver and formed a power couple of sorts. She joined him editing the women’s pages at the Statesman, and together they founded the “Imperial Order of Libyans,” an organization that fought against racism and declared their identities as African Americans.

Emma Azalea Hackley graduated from Denver University’s music school in 1900 and, about that same time, Edwin Hackley sold the unprofitable Statesman to G. F. Franklin. The couple then moved to Philadelphia, where they ultimately separated. Once there, Edwin Hackley wrote a musical drama, The Ambassador, which showed in Denver and Philadelphia. He also cowrote Hackley & Harrison's hotel and apartment guide for colored travelers, published in 1930 and which may have been an important precursor to the infamous Green Book for African American motorists. Hackley ultimately died in 1940 in Pennsylvania, with just a short obituary in the Colorado Statesman (not to be confused with Hackley’s Statesman) to inform his former hometown.

Based on this biography, it seems pretty obvious that Colorado’s first Black lawyer was, indeed, Edwin Henry Hackley in 1883. While he did not sit for the bar exam in Colorado, he was admitted to the bar on his Michigan license and prior experience as a lawyer. He practiced as a lawyer in Denver, however briefly, and performed other duties related to the law (such as a clerk for the city).

Yet, none of this does anything to demerit Samuel Cary’s sacrifices and important work on behalf of his Five Points community and others. His practice is notable in that he defended clients from all walks of life. He was also Colorado’s fifth African American lawyer, practicing during a particularly racist time, and was disbarred in 1926 in a decision that many argue was racially-motivated. He was reinstated in 1935.

Additionally, the other three African American attorneys on the rolls of the Colorado Bar (Joseph Stuart, Thomas Campbell, and George Ross) might have equally compelling stories. More important than any single story is the greater story. Regardless of when its first Black lawyer was barred, Colorado continues to increase (and lag behind) its diversity in the legal profession, the work that the Sam Cary Bar Association was founded upon.

It would appear that he is burried in Eden Cemetery in Collindale, PA

Thanks for reading and sharing the extra information, Jerry!

What a full, fascinating life Hackley led! I suspect that a series of biographies on each of the gentleman attorneys you named would be equally fascinating. Thanks, Sarah.

Thanks for reading and commenting, Laura. I have a sneaking suspicion there are many untold but fascinating stories here.

Lovely article about Edwin Henry , he is my 2nd great uncles son. I have been working on my Ancestry on my Hackley side of family and have read Lisa Brevard book on Edwin. My 2nd great grandfather Marcellus Hackley was Edwin’s uncle. Marcellus also fought in the Civil War.

What a wonderful personal connection, Paula! Thank you for reading and sharing the information on Marcellus Hackley.