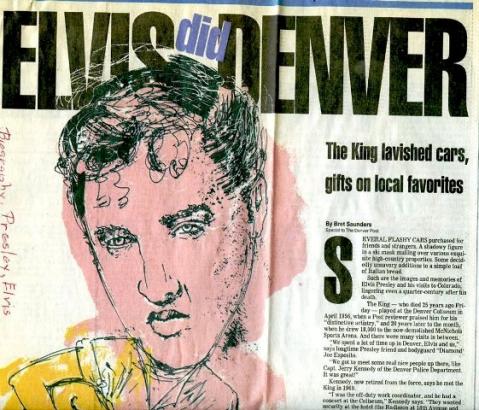 So everybody knows about Elvis and how he made crowds of screaming girls go crazy with a shimmy of his hips. On April 8, 1955 he first appeared in Denver, where he ignited the mostly female crowd. But did you know Elvis also loved and was beloved by the Denver police? Recently, a rock historian asked WHG to do some research on Elvis in Denver (of late we’ve also been asked to assist with research on the Beach Boys and Blue Oyster Cult. And check out Tom Hallewell’s archive of 1980’s and 90’s punk and goth ephemera). Our research turned up some interesting trivia.

Elvis felt like he needed protection from all those screaming fans. At his first Denver performance, seven policemen escorted him to the stage. During this first stay in Denver and during his latter visits, Elvis became extremely dependent on and fond of his police bodyguards. He hung out with them and they helped him out by running errands and procuring things that he needed. Ironically, he became especially close to Jerry Kennedy, a tough, no-nonsense cop who crusaded against drugs. When Elvis got a skin rash in Vail in 1976, Jerry and his police buddies helped Elvis get in contact with a police doctor who gave him a needed prescription. In thanks for all their years of service, Elvis took Jerry Kennedy and other police buddies to a Denver car dealership and bought them all Lincolns and Cadillacs! The Denver police even gave Elvis a Denver police captain’s uniform, which Elvis wore as a disguise (see Phil Goodstein’s book The Seamy Side of Denver for a picture of Elvis in uniform). When Elvis died of a drug overdose, his death was broadcast on police radio.

Another thing Elvis liked about Denver were the Fool’s Gold Sandwiches made by The Colorado Mine Company, a restaurant in Denver. The sandwich was invented by Nick Andurlakis, who worked there. When a hungry Elvis came to Andurlakis after a gig (escorted by Denver police, of course), Andurlakis suggested the Fool’s Gold, which consisted of a hollowed out French loaf filled with peanut butter, jelly and bacon (yuck). Elvis liked the sandwich so much that on February 1, 1976, he flew from Memphis to Denver on a whim just so he could eat the sandwich. He brought along Jerry Kennedy and another Denver police buddy who had been visiting him in Tennessee. At Stapleton Airport they were met with several Fool’s Gold Sandwiches, brought by the staff of the Colorado Mine Company. They stayed at the airport, ate for a good while, then flew back to Memphis.

For more information on Elvis in Denver, including the above stories, come into WHG where you can read old newspaper stories from our Elvis Presley newspaper clipping file and from our newspaper microfilm.