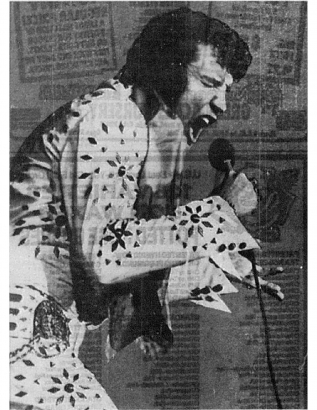 On January 14, 1976, Elvis Presley was vacationing in Vail but he wasn't thinking much about skiing. Rather, his focus was on the Denver Police Department. More specifically, he was thinking about how he could show his gratitude to a group of Denver Police officers who served as his private bodyguards when he visited the Mile High City.

But Elvis was Elvis, so the gifts he had in mind were King-sized luxury automobiles, like Lincolns and Cadillacs.

In all, Elvis purchased four luxury cars for Denver cops and, in doing so, created a Mile High tale that has endured for more than four decades. The details of the King's largesse with regards to the Denver Police is the stuff of legends, but the true story is pretty whacky on its own.

Anyone with a working knowledge of Elvis Presley knows that the King of Rock 'n' Roll had a fascination (some would say obsession) with police officers. Wherever he went, Elvis courted the attention of the local authorities, whom he also hired as security. In Denver, Elvis's go-to man on the force was Denver Police Captain Jerry Kennedy. Kennedy and Presley struck up a friendship when Presley played a Denver gig and Kennedy helped out with his security.

As was the case in many municipalities Elvis visited, he was given a Denver Police uniform of his own, which he was known to wear when visiting the city. (In fact, Elvis was wearing that uniform when first ate the fabled Fool's Gold sandwich, but that's another story entirely.)

Kennedy and Petrifaso were vacationing with Elvis in Vail when the King asked Kennedy what kind of car he drove. The police captain replied that he drove a small economy car. According to a Rocky Mountain News account from January 16, 1976, Elvis replied, "I want to buy you a family car. I've got a Lincoln and I want you to have one, too."

Elvis then turned to Petrifaso and said, "I'll buy you a car, too."

Car Shopping with the King

So the group called up Tom Heydman at Kumpf Motors (899 Broadway) and asked if he would keep the dealership open late so that Elvis Presley could come in and buy some cars. Though Heydman wasn't quite sure whether or not to believe the voice on the other end of the phone line, he agreed. Two hours later, Presley and his de facto police escort arrived at the dealership and Presley instructed Kennedy to pick out any car he wanted.

Kennedy played the situation coolly and simply requested a car identical to the King's. That car was a light blue Lincoln Continental Mark IV measuring 19 feet long, with a quadraphonic sound system measuring 19 feet and a massive 16-valve Ford V8 engine. Back in '76, a vehicle like this carried a $13,300 sticker price (about $60,000 in 2020 dollars).

In order to disguise his distinct look during the ride down from Vail, Elvis wore a wool ski mask over his face. After a time, the mask caused chafing and Elvis asked for a doctor to alleviate his discomfort. Kennedy immediately called Dr. Gerald H. Starkey, the medical coordinator for the Denver police and fire departments. Dr. Starkey had once treated Elvis for a cold and was someone Elvis was comfortable with.

Upon entering the dealership, Dr. Starkey complimented Kennedy's new ride and the King took note. Without missing a beat, Elvis told Starkey that he could have a new car, too. The good doctor rode off in a brand-new tan Lincoln Mark IV that night. 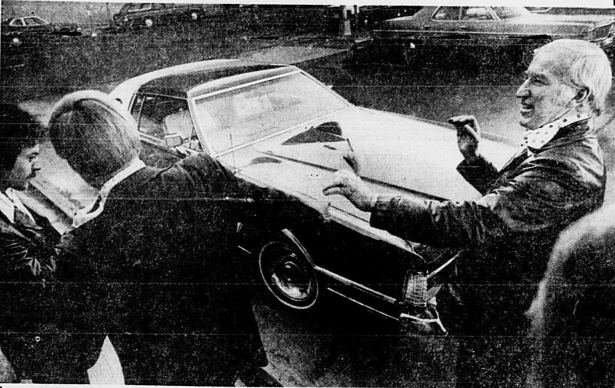 Lincolns Aren't for Everyone

While the Lincoln Mark IV is a pretty sweet vehicle, it's just not for everyone. Detective Petrifaso, for example, preferred Cadillacs and the King was happy to oblige his wishes.

The whole party drove off to Jack Kent Cadillac at 1485 S. Colorado Boulevard. At around 10 p.m. that night, Elvis purchased Petrifaso an ice-blue Cadillac with a sticker price of $13,000. For good measure, he also purchased two more cars for two women who were traveling with the party. (In some accounts they're described only as "women" and in others as "wives of men in his traveling party" - they are never described by their given names.)

But Elvis was definitely not done purchasing luxury vehicles for city employees.

The next day Elvis called Sergeant Robert Cantwell, another Denver police officer who had provided security for him in the past - and worked with Petrifaso - and said, "Hey Bob, I want to give you a gift." Cantwell played off the request saying that Elvis didn't owe him anything, but Elvis wasn't one to give in easily. So, Cantwell got a Cadillac, too.

When asked to confirm the story about Elvis, the cops and the Cadillacs, Jack Kent Cadillac Manager Skeets Antonio demurred, saying only, "It's an invasion of privacy," and "He's [Elvis] a very nice person."

That Sunday, the whole entourage gathered in Vail to watch Super Bowl X (Pittsburgh vs. Dallas) and, presumably, everyone drove back to their workaday lives in luxury vehicles provided by the King of Rock 'n' Roll.

Wait a Minute, is This Even Legal?

Not surprisingly, gifting police officers luxury vehicles raised a few eyebrows. When reporters queried Captain Kennedy whether the deal was kosher he replied,

"I certainly don't see anything wrong with [it]. It's a matter of personal friendship and has nothing to do with my duties as a police officer. If this guy [Elvis] was a local resident who we might come into contact with here it might be something different."

Kennedy's opinion was backed up by then Denver Police Chief Art Dill, who had himself been offered a car from the superstar. Dill made the difficult decision to pass on the offer because the decision about whether or not the other officers could keep their cars was actually his. (At that time, the City Board of Ethics could only offer their opinion on the matter.)

In a statement to the Rocky Mountain News, Dill explained his position by saying, "I will say it was difficult to refuse, that Mr. Presley seemed hurt when I had to tell him no, but that I explained my position to him and thanked him for the offer."

As it turned out, DPD officers couldn't accept gifts while on duty, but were free to do so on their own time. Dill was something of an expert on this matter as he had accepted a gift from Elvis before, on his own time.

Getting a read on exactly how many cars Elvis bought in Denver during that memorable week is challenging. Some local newspaper accounts suggest that he may have purchased as many as nine vehicles, but those same papers only point to six individual purchases, including the two to the nameless women. A Rocky Mountain News report from January 16, 1976, says Elvis spent about $70,000 (about $318,000 in today's dollars) on the first night of the car spree. If he did in fact purchase nine vehicles that were all roughly in the $13,000 range, he would have spent $117,000 ($525,000 in 2020). It is known that Elvis paid for the vehicles with a mix of personal and corporate checks.

A Rocky Mountain News story from December 1, 1977, suggests that there were nine vehicles purchased because the Colorado Department of Revenue filed a claim with a Memphis probate court seeking $13,000 in unpaid taxes on nine luxury vehicles (valued at $14,000 each) that Elvis had purchased in Colorado. It's unclear whether the State received that money from the Presley estate or whether the recipients of the gifts wound up footing the bill themselves.

Elvis actually came through Denver a couple more times between January 1976 and his death in August 1977. In April 1976 he played a sold-out show at the old McNichols Arena. This may have been the same visit when Elvis ran across the legendary Fool's Gold sandwich, (a loaf of bread stuffed with a jar of peanut butter, a pound of bacon and a jar of jelly).  It also appears that Elvis flew to Denver one last time to grab somewhere between ten and 22 of the sandwiches to fly back home to Memphis (sources vary on the actual number of sandwiches and the story behind the sandwich trip).

The fate of the Lincolns and Cadillacs he purchased while in Denver remains unknown.

The above location of the restaurant is incorrect. It was at 68th and Wadsworth, where Walgreens now stands. It was called Luciano's. I had the privilege of working there while I was in high school back in the day.

Hi There - Thanks for the additional information on this restaurant. Do you remember about what years it was there?

My wife's family knew Ron very well. There is no way that he would have knowingly served as Mr. Howard's bodyguard if he had any idea about Howard's drug use.

There used to be a restaurant in Glendale at Birch St and Virginia Ave. Elvis used to go there (or send someone for him)
when in town and get his special sandwich. They then would make them and sell them to their regular customers for like $150 each.

Jerry Kennedy came into the Cadillac Dealer I work at. He recounted that Elvis did give him a car. He traded the next year on another Cadillac. He relented that if he kept the one Elvis gave him it would be worth some money.

Hi Joe - Thanks for the additional information! The internet was pretty useless in helping with our attempts to figure out what happened to the Elvis/DPD cars.

Not true. Jerry Kennedy is my uncle and kept the Lincoln for quite a few years and donated it to a museum in Tupelo Mississippi.

You left out one of the Cadillacs. At that time Channel 4 morning news anchor Don Kinney read the police Cadillacs story and quipped that he wouldn't mind getting one too. One of Presley's people called the station to ask what color. A couple of hours later at 1044 Lincoln the blue Cadillac was presented to him. Don was totally incredulous this was happening.
The whereabouts of this one is known. I saw it last fall and have picture of it. It is still in great condition and is still in the Kinney family.

Hi Craig - Thanks for the additional information. Elvis was nothing if not generous!

Elvis also bought Tim Kinney a new car he was an anchor at channel 4 in Denver. When the story was run Tim said I wish somebody would buy me a car so Elvis did.