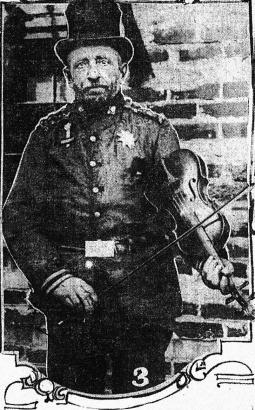 The late 19th century was not a pleasant time in the West. Men fought for gold, silver and land. Racial tensions were high and immigrants from the Old World continued to stream in. Like most western settlements, migrants to Denver required hope, a vision, and a bit of magical thinking. "Pete, the prophet" embodied all of these qualities and then some. Not much is known about this man prior to planting himself near the banks of the Platte, but, according to the 1900 census, Peter B. Therkelsen was born in Denmark in 1842 and immigrated to Pennsylvania in 1870. By the 1880s, this mysterious, Nordic stranger had arrived in Denver and set up his first commune for down-and-out men named "New Israel".

This first enclave was established at 1595 Bryant Street, which is now under the Mile High Stadium parking lot just north of Colfax. It was what we would now consider a shantytown; constructed from cans, scrap metal and discarded wood. This was not altogether a new phenomena. Early Italian immigrants set up small enclaves along the banks of the Platte that were referred to as "The Bottoms". Pete had worked as a cobbler and a Union Pacific man at various points, but the salvation of his down-and-out flock became a full-time occupation and he was nothing if not dedicated. 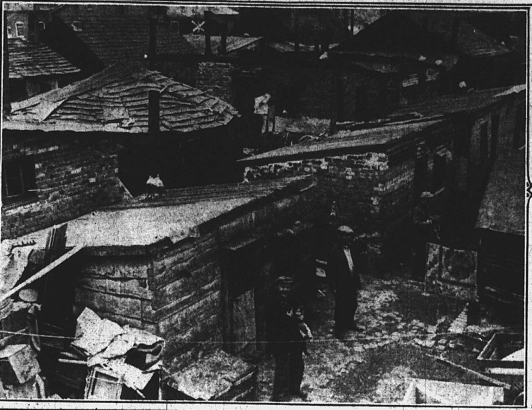 In the early days, most of the men who flocked here (no women were allowed) were seasonal workers in the mines and on the railroads. He offered them refuge and respite through the winter months until they could return to work in the spring.

While he was deeply religious, he made no requirements that residents adhere to his beliefs outside of his prohibitions on smoking, drinking and swearing. There were, however, reminders of the religious nature of the town posted on various edifices up and down the streets. There was his "Spirit Grade Redeemed Synagogue", the "Restitution Auditorium" and the "Second Israel Spiritual Liberty Church and Kingdom". Perhaps the saddest inscription was the "Bride and Groom Hotel" on "Paradise Avenue".

Sometime in the early years of this social experiment, Peter was said to have received a revelation. It involved the promise of a spirit-bride that was en route. He knew not who she was or where she would travel from, but he was certain this vision of true love was a part of his destiny. In preparation for her, he constructed the "Bride and Groom Hotel". He worked tirelessly gathering loose bricks, tin cans and railroad ties until this monument to marital bliss was completed.

Despite the failure of his bride to materialize, he never took down the sign on the building to save face or avoid painful reminders of a love that was not to be. Instead, the building remained and others were allowed to live there and take refuge from a harsh world in which Pete's main goal was still providing solace for those in need. 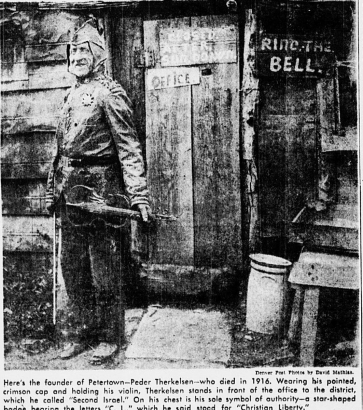 Besides attending to the down and out and those needing seasonal shelter, Pete also used his community to tend to the aged and infirm. In the days prior to the New Deal and Social Security, there was little to sustain the elderly beyond the charity of family and strangers. Pete saw to it that these men could retire with whatever bit of dignity he was able to provide them and, by all accounts, these men were grateful for it.

With the constant influx of tuberculosis victims to Colorado, he even sought ways to minister to those who could not afford the many formal sanitoriums that existed at that time. Pete, long rumored to have hidden riches, purchased an automobile for the express purpose of taking these tuberculars out on the road for sunshine and fresh air. He promised no miracle cures and profited not at all from this beyond the personal satisfaction that comes from human generosity.

While Pete the Prophet was not one to self-promote on the basis of his acts of good will, he was known about town and was not shy about making pronouncements, particularly in the pages of the local Swedish Language newspaper, Svenska Korrespondenten. He would often write editorials about himself in the third person and sign off, "I, I, I, Spirit". Among these was a fascinating piece regarding women and bicycles:

Pete also talked about spending $80 to advertise his 1897 gospel and suggested Denver ignore it at its peril. Said gospel included moving the Sabbath to Friday and rejecting all other religions as "inventions of men" while maintaining a basic Judeo-Christian framework to his new creed. According to a Denver Post article, he even tried to revive the animal sacrifices of the Old Testament by executing two pigeons over an ornate sink, though that was his first and last attempt at appealing to deities through blood.

Some of his written diatribes wandered from religion and into criticism of local police for, apparently, harassing him over his innovative fashion sense.

I I I a gospel spirit, I command my servant P. B. Therkelsen to use his gospel garment in the strit. Therefore I hereby give notice to the Polis and detectives Not to interfere with his business. He is not a crank, not a hobo, not a drunkard, not a lunatic, not thief, not a robber, and not a Cheat. But he is a taxpayer of Denver.

He then went on to describe how everyone from soldiers to cats have their own modes of dress and that he is entitled to his. He certainly demonstrated passion, particularly through his early use of random capitalization, but he didn't display the kind of mean-spirit and animosity conveyed by many strains of religious zealots we encounter in our modern age. 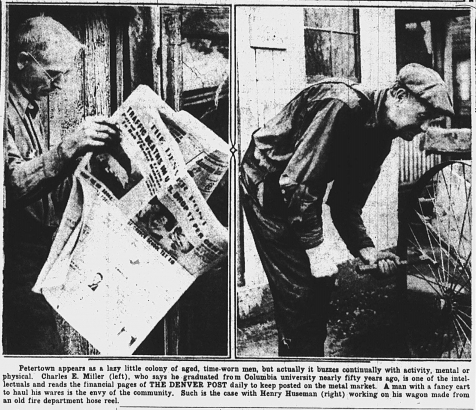 Make no mistake, this was no utopia. Like most cities built upon the dreams of men, no matter how small, there were always barbarians at the gates. In the early days of the 20th century, word had spread that Peter had riches hidden away somewhere. Upon hearing about this, a group of "West Colfax gangsters" tied him up and, quite literally, held his feet to a fire. As Denver Post recounted the story, he yelled so loud that he scared away his abductors. On another occasion, a group of young hoodlums attacked the village in the middle of the night, looting and  vandalizing for fun. In all such occasions, members of this society would come together to help each other and rebuild.

Perhaps the greatest challenge came in January 1916 when Pete the Prophet died of pneumonia. He was buried in Riverside Cemetery and mourned by the society he had created. What was rather unique about this communal experiment is that it did not fall apart after the loss of its visionary leader. Instead, it endured for another 40 years. There were even small offshoots of the original town. One was on the site of the current north-side parking lot at Mile High and the other was along the Platte near the Zang Brewery and current aquarium. The estate of Peter B. Therkelsen aka "Pete the Prophet" (a few thousand dollars and his new society) was left to the care of his nephew Christian Albert Therkelsen. By 1924, Christian's new wife, Marie, and his stepdaughter would be the first women to set foot in Second Israel since its founding.

The linked communities would continue on as they had; the demographics shifting gradually from seasonal laborers to the elderly and men who collected and sold junk and discarded metals. Christian lived until 1944 and, upon his death, Marie took over the ownership. She continued charging small rents to the inhabitants and tried to keep things going, but abandonment and detritus began to take hold. In 1945, the northern "suburb" of Petertown was declared an unsanitary fire hazard and Marie consented to let the fire department raze it with a controlled burn.

Marie continued to protect the original Petertown until her death in January of 1953, when Earl Carlisle, one of the final residents, took over the caretaking of the crumbling community. Early in 1954, the curtain finally fell and a group of children set fire to what was left of Pete the Prophet's crumbling vision of a new world. 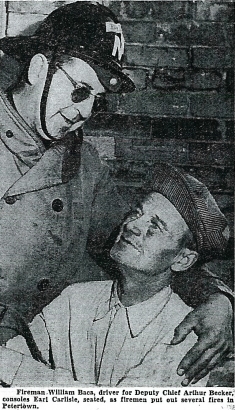 As we search for meaning in our own time, it's always good to have reminders like this that the human condition is still recognizable, regardless of how far we try look back over our shoulders.

Another thing to take away from this is how it disrupts the myth promoted by Eastern industrialists about the new west: that every man was an island. In many Western communities, people pulled together or died alone. Denver was no exception. Next time we find despair in our modern world, we would do well to remember that holy man from Denver's past who sought to make the world a little bit better in his village down by the Platte.

For more information about Petertown, check out the clipping file in the Western History & Genealogy Department. Anyone interested in the Italian settlements along the Platte should take a look at Stephen J. Leonard's thesis, "Denver's foreign born immigrants, 1859-1900". You might also check out another down and out community of Denver's past called Gopher City.

Thanks for your excellent piece that provided more well organized material on Petertown than I have seen before. You might be interested in David Wetzel's recent book on another Denver connected spiritual figure, Francis Schlatter. It is: Vanishing Messiah: The Life and Resurrections of Francis Schlatter (University of Iowa Press, 2016).

I also enjoyed your piece about the Upton Sinclair-- Rockefeller letter. More than 50 years ago I attended a lecture by Sinclair on the topic "How I Reformed Three Millionaires"--one of whom was Rockerfeller.

I hope you and your colleagues at DPL keep doing your informative blogs. As conventional publication withers, your efforts will perhaps replace printed channels in getting Colorado history before the public. I also hope that you aggregate, disseminate, and preserve this material so it is not lost in the billions of galaxies of cyberspace. Perhaps it would be a good idea to link the staff blogs with the Center for Colorado Studies at the Denver Public Library site and vice-versa.

By the way, for people whose sight is dimming the "I'm Not a Robot test" (which blocks show a bus) can be challenging.

I am familiar with your work and consider it high praise that you enjoyed this piece. I am also unbelievably jealous that you were able to see Sinclair in person. If you go back to the Sinclair letter blog, you will also see that we have added a link to a scanned copy of the letter. https://drive.google.com/file/d/1Xrpw6C0NxTIFHlsZbd26nvEj25yazYoA/view?u...

I will talk to the more tech savvy members of our staff and see what we can do regarding your CCS suggestion.