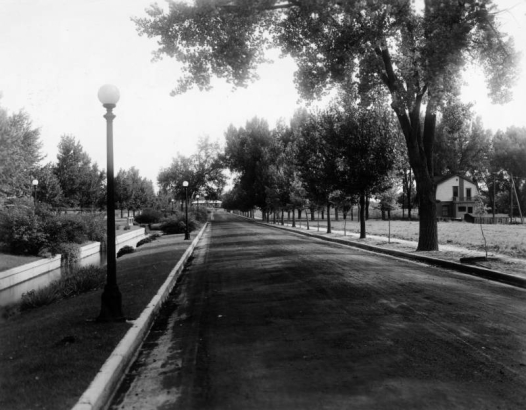 According to local history researcher Larry Borger, it's the City Ditch, a 26-mile irrigation ditch that's been running water from the South Platte River to Denver neighborhoods for 155 years.

Running 26 miles from a diversion on the South Platte River at what is now Chatfield Reservoir, the City Ditch is responsible for Front Range landmarks such as Washington Park, City Park, and the town of Littleton. Borger and other historians flatly state that without the City Ditch, the City of Denver, as we know it, simply would not exist.

Borger, a retiree who once served as Littleton's City Manager, became interested in the subject of 'Denver's oldest working thing' after a friend suggested that it might be the 'oldest working thing in Littleton,' a town for which the ditch is entirely responsible. He wrote up his findings in a self-published article titled "The Historic City Ditch." We spoke with Borger recently about his research and the City Ditch's role in building the Denver we know today.

Denver is—and has always been—a geographically arid place. While the waters of the South Platte and Cherry Creek nourished small settlements on their banks, development on land that was further from the water wasn't possible without the construction of irrigation ditches.

In 1861, the Colorado Hydraulic Company, a venture funded by controversial Rocky Mountain News publisher William Byers, began digging a ditch from a diversion about half a mile from where Bowles Avenue runs in Littleton today. The plan was to run the ditch to what would become the Capitol Hill neighborhood and support agriculture for the growing city of Denver. Construction was halted after only a few months due to the outbreak of the Civil War.

The work stoppage was just as well, as the Ditch's original course was plotted at an incorrect grade. For the Ditch to properly deliver water using only gravity, it had to be plotted on a course that drops four vertical feet per mile. Since the South Platte drops eight vertical feet per mile, this course allowed the City Ditch to basically move water uphill.

Construction on the Ditch resumed in the fall of 1864 under the leadership of John Wesley Smith, who was hired by the Colorado Hydraulic Company to oversee the project. Smith employed giant canal digging machines that were described by the Rocky Mountain News as being pulled by 16-20 cattle and could "do the work of a hundred men per day."

Under Smith's leadership the Ditch, which quickly became known as Smith's Ditch, snaked its way towards Denver.

When the City Ditch was completed in 1867, a flurry of development followed quickly in its path. And, just as importantly, Ditch water allowed for agriculture, development, and tree planting to take root in places where it simply wasn't possible pre-Ditch.

The City Ditch, as it became officially known in 1875 when the City of Denver took possession of it, provided the water that irrigated the lawns, trees, and gardens at City Park and made construction development a reality in the fledgling neighborhood of Brown's Capitol Hill.

On the other end of the canal, a Colorado Hydraulic stakeholder named Richard Little built a grist mill on the Ditch, platted out a town, and named it after himself. Thus, the City of Littleton was born on what is now the intersection of Santa Fe and Bowles.

While Denverites initially welcomed open irrigation ditches, they eventually saw them as breeding grounds for disease and other dangers. By the end of the 19th Century, most of the City Ditch, and its many ancillaries, had been covered with pipes.

While the City Ditch isn't visible, it's still hard at work bringing water to a city that, historian Patty Limerick points out in her book A Ditch in Time, The City, The West, and Water, that is every bit as arid as it was in 1860.

Borger is one of many researchers and historians who have highlighted the importance of ditches and the engineers, workers, and planners who made the development of Denver a reality. He's supporting efforts to have the portions of the City Ditch that runs through Littleton and Englewood listed on The National Register of Historic Places. The portion of the City Ditch that runs through Washington Park is already on the Register.

Researching 'Denver's oldest working thing' was a labor of love for Borger, who utilized resources at the Littleton Museum and the Western History and Genealogy Department in his work. His efforts were hampered by the pandemic, but he's hard at work trying to track down photos of the canal digging machines.

As for 'Denver's oldest working thing,' its crucial role in the development of Denver is difficult to overstate.

This is so cool, but I wish there was a map attached to this article!

HI Sarah - There is a map at the very end of the article that's attached to this blog. Thanks for reading and commenting!

May I reprint the map in a neighborhood newsletter? If so, How would I give credit?
Thanks for your help!

Hi Georgia - Shoot us an email at history@denverlibrary.org and we can connect you.

In addition to flowing out of Washington Park along Marion Street Parkway, the ditch used to flow into the Park along another Parkway, called Grassmere Parkway or Buchtel Parkway at the time. That street followed the ditch on a meandering path from about University and Mexico to Louisiana and Gilpin. South High School is built over the ditch and where the Parkway used to be, and Buchtel became the name of another prominent Denver boulevard.

I heard, from someone who has the Denver Ditch running through their Englewood property, that when construction was happening on T-Rex (I-25 project) they found a pipe under the highway that carried the ditch water to Washington Park from the south side of the highway. They had to remove it and didn't want to spend the money to replace it, so the water in Washington Park isn't ditch water anymore. Instead they have recycled water, which is high in salinity, and damaging the park trees.
https://www.denverpost.com/2015/11/18/why-so-many-trees-in-denvers-washington-park-are-dying/

I've always been fascinated by Smith's Big City Irrigation Ditch since the first time I was shown a part of the still open section near our house that friends showed me on a bike ride near Porter's Hospital. We called it the Donkey Ditch because there was a Donkey in the yard of a house beside THE Ditch and he was very friendly as long as we shared some apple slices and sugar cubes with him. Many years later when we built a Concrete Plant in Blakeland, I learned about the steps taken to maintain the flow of the ditch's water through Chatfield Reservoir when the original diversion system up Waterton Canyon was replaced.

My childhood home on 32nd in Wheat Ridge had this ditch. We had a little red bridge that went over it. When it was empty, it was my playground for exploring. In winter when it was frozen, ice skating. Lots of memories there. When it was near flood stage with fast moving water, that’s the only time I didn’t like it. I sometimes have recurring nightmares about that.