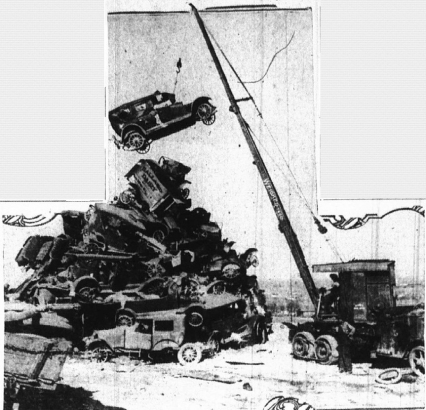 On a blustery Sunday night in February 1930, a lone man climbed Denver's Ruby Hill with a torch in his hand. His mission: to ignite a pile of 125 kerosene-soaked automobiles for what was likely the largest bonfire the City of Denver has ever seen.

The man with the torch wasn't an arsonist. He was taking part in an elaborate promotional stunt sponsored by the Denver Post and the Denver Automobile Dealers Association, and he wasn't alone. As many as 160,000 people were packed into nearby Overland Park to witness the spectacle of a pile of burning automobiles.

The bonfire was a two-pronged effort to promote the Annual Midwinter Automobile Show at the old Denver Municipal Auditorium, while also thinning out the inventory of used cars at Denver area car lots. According to a report from Denver Post, "The automobiles to be used in the bonfire are worn out cars. The dealers want to destroy them to keep them off the streets, so traffic will be safer."

To make sure there was plenty of kindling for the fire, each member of the Association had been asked to donate four or five old cars to provide kindling for the massive blaze. Each car was filled with kerosene-soaked logs in order to make certain that the blaze would really take off. As an added bonus, the fire was to be ignited by a bomb dropped from a passing airplane.

At this point, it's worth mentioning that this stunt was not quite as irresponsible as it seems to contemporary eyes (notwithstanding the obvious environmental damage that could come from torching a massive pile of kerosene-soaked automobiles). For starters, Ruby Hill had not yet been designated a city park in 1930. That wouldn't happen until the late 1950's.

At the time, Ruby Hill was private property owned by the Overland Brick Company. Denver Police were well aware of the dangers of having large crowds so near to a massive fire, and made a huge, and successful, effort to keep the crowds at a safe distance.

And what a crowd they had.

Denver Police Captain George Merritt made a conservative estimate of 30,000 cars clogging the roads and highways leading up to Overland Park.  He went on to estimate that each car had an average of four people in it, swelling the number of bonfire aficionados to somewhere around 160,000. 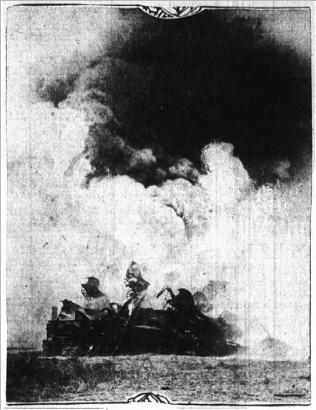 The original plan for igniting the classic car bonfire did not involve the lone torch man described at the beginning of this blog post. Here's how the Denver Post described what was supposed to happen, and what actually happened instead.

Airplanes were to have appeared above the pile and dropped inflammable bombs promptly at 4:30 p.m. but the planes were half an hour late reaching the spot. In spite of a strong, cold wind the crowd remained on the scene. When the planes finally did appear the bomb failed to reach its mark, and the bonfire had to be lighted with torches.

Unsurprisingly, the torch quickly worked its magic and the February night was lit with flames that could be seen for miles. In a spontaneous outburst, the audience began laying on their car sirens (which many cars of that day had instead of horns).

Maybe the novelty of seeing a massive pile of cars on fire wore off quickly, or maybe the crowd needed to get home and go to bed, but either way, the gathered masses began streaming out of Overland Park about 30 minutes after the bonfire was lit. Predictably, this led to another gigantic traffic jam on roads that were never meant to handle 30,000 cars at once. The fire, of course, was unaffected by the traffic jam and continued burning for several more hours.

Once the fire dissipated, the remaining scrap was sold to local "junk" dealers.

It almost goes without saying that it's highly unlikely that a similar promotional event, involving 125 cars packed with kerosene-soaked logs and airplanes dropping incendiary bombs dropped from above, would be allowed today. In 1930, that was just good old family fun.

We'd like to thank our Western History researcher who both suggested this blog, and provided us with much of the original research.

Good catch, Katoe. Thanks for letting us know.

Any information about the time period when Ruby Hill was used as a landfill? Thanks.

Hi Linda - I think that would be a whole other blog! We did find that the owners of Ruby Hill at the time of the bonfire also owned one of the nearby brick yards.

I have to ask Dad if he remembers this. He would have been 4 years old. His family house at that time was on the corner of Evans Ave & Fox St. The house is still there at 2110 S. Fox.

Hi Mike - At that address, they probably didn't need to turn on the heat when the bonfire was going!

In the late 1950's the Englewood Police discovered a large box of very old and sweating dynamite. They called the Denver Fire Department who had the only bomb disposeable unit in the metro area. The head of Denver Fire's Arson and bomb was my father. Sweating dynamite indicates it is very unstable and is nitro . It was determined that due to the unstable explosive they would take it to the junk yard at Ruby Hill and detonate it. So at approximately the same location of the car bonfire of 30 years earlier the highly unstable dynamite was set off. The resulting blast broke windows with the shock wave for a huge area of south and west Denver and Englewood. I never did find out who paid for the glass replacements. I am still kidded about the event by friends. So Ruby Hill has a historic checkered history.

Hi Jim - That is a pretty amazing story! I'm glad they were able to safely transport the sweating dynamite! Windows are replaceable, but the folks in the Arson and Bomb Unit weren't!

Great posting Brian.
Ruby Hill was also the site of Christmas trees burned in mid January when I was a kid. Not sure of the year, mid to late 50s. Definitely a step up from the Klan actions on Ruby Hill in the 1920s.

I miss my Denver Post I got daily..I'm out of state ...can I still get a Denver Post?