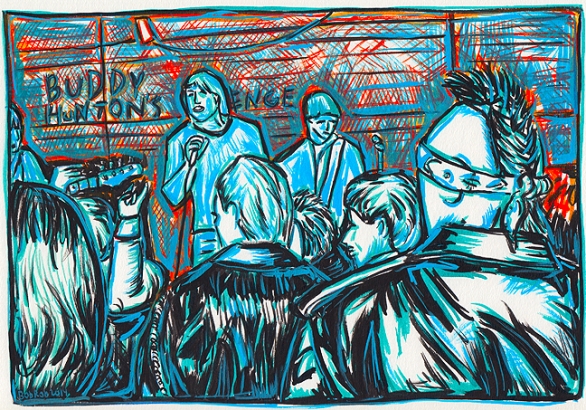 He seemed to have his hand in everything underground from the early to mid 80s, though he was mostly known for being a promoter. By promoter I mean, he booked bands in the most unusual spaces like a junkyard, a former car garage (Kennedy’s Warehouse), and anywhere else that had electrical outlets. He even fronted the band Da Butcherz and made fanzines. The icing was his faux candidacy for the mayor of Denver. He embraced the “do what you can get away with” ethic.

Tom was also daring. He possessed the instincts of a hustler by keeping one step ahead of systems in place or any person who tried to hinder his agenda. For glory or otherwise, his modus operandi was to make things happen. He always had a vision and a master plan for his undertakings. I was always in awe when I heard Headbanger pulling off one of his schemes.

In the summer of 1985 I rode up to Boulder with a couple of friends to see a punk show at Gate 10 at Folsom Stadium on the CU Boulder campus. Gate 10 was hardly a club, it was a nondescript empty room tucked away on the side in one of the many entrances into the stadium. Someone had the foresight that it would be an ideal venue for live punk and hardcore music. Headbanger was running the show that particular evening.

A couple of campus police officers arrived to investigate why loads of kids in leather jackets with crazy hairdos were hanging around the stadium. I stood off to the side and watched Headbanger skillfully explain to the officers that he was just a doorman hired to take “invitations” for the event. That was when two punks walked up to him ready to hand over a fistful of pocket change to gain entrance.

So as not to get outed for hosting and taking cash for a questionably legal show, he preemptively shouted out to the kids approaching the door asking them for their invitations. The pair stood there looking clueless, glancing down at their coins. He motioned for the kids to move over to the side. The campus cops nodded to one another and walked away wishing for something a little more exciting.

With the officers in the distance, Headbanger gestured the kids to move forward. He took their money, stamped their hands, and ushered them inside the room. It was a trademark Headbanger moment.

Finding places to hold shows in the Denver was a challenge and Tom mastered it.

When it came my turn to carry the torch and promote shows in the later part of the 80s, I had many years of observing the Headbanger magic. I was fresh out of high school when I promoted my first show in 1987.

A year later I joined the Fraternal Order of the Eagles in Thornton. The process for joining the lodge was buying a round of beers for a pair of old veterans camping out at the bar. They checked me up and down and signed off on my application.

I did this all in the name of punk rock so I could book concerts in their dingy bingo hall.

Tom inspired a whole generation of ad hoc Denver promoters: Razer, Brewer, Shane from Happy World, and even the Denver Skins. Headbanger showed us that anyone with a little money (yours or otherwise) and a lot of nerve could promote a show.

Tom eventually ran his course. He, like other original Denver punks, either outgrew or became disillusioned with the growing violence within the scene. One fateful evening at the Packing House he was beaten to a pulp by a group of kids at one of his shows. He was done. He took his creative punk spirit and moved on. He had a good run: creating something out of nothing for all of us who to went to his shows, saw his band, and read his fanzine.

In the end, Tom left his blueprint for others to continue. His legend precedes him.

You can follow more of Bob’s writings on the history of the Denver punk scene by checking out his work at: http://punkerbob.blogspot.com/

If you're interested in learning more about Denver's early punk scene, stop by Denver Public Library's Western History and Genealogy Department and ask to see the Tom Hallewell Collection. It's packed with zines, fliers and correspondence that show exactly what went into bringing punk shows to Denver in the early and mid-1980s.

Tom's a true Denver legend. I don't recall how many shows I went to or worked at that he put on, but if you went to underground shows in the late 80s or early/mid 90s, you can thank Tom for many of them.