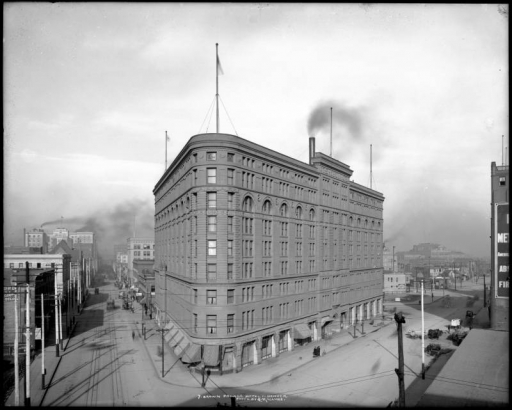 A stranger arriving in Denver at the end of a railroad journey of 600 miles over the plains from the Missouri River, as he realizes the size of the city, usually involuntarily asks himself, "What justifies the existence of Denver? Is it not already too large? Can it be possible that the city will continue to grow?"

That's how Frank Thayer described the city of Denver in his 1898 book, Denver, By Pen and Picture. Thayer, a Denver-area photographer and author, was a tireless booster of the Mile-High City, and was eager to share his passion with the rest of the country.

In doing so, Thayer created both a solid history of Denver, which was just 40 years old at the time, and an amazing snapshot of the city he lived in and clearly loved.

What's particularly interesting about Denver, By Pen and Picture, is the demographic profile it presents. (Even better, the information he presents all comes from the 1890 US Census, which was mostly destroyed by a fire in 1921.)

The population of Denver in 1898 was, as it still is today, comprised largely of people who moved here from other places. According to Thayer's research, Denver's population in 1890 was 106,713, and that number had risen to 165,000 by 1898. Approximately 76% of Denver residents back then were "native born Americans." By way of comparison, New York's native population was 57.7% and Chicago's was right around 59%.

As has been the case in Denver as long there's been a Denver, Colorado natives were a pretty rare commodity. Only about 18% of the population were born in Colorado. So where were all those other non-Colorado natives coming from? From the native born population, New York was the biggest contributor with 8,545 settlers, followed by Illinois with 7,623.

It's worth noting that Thayer thought Denver's foreign born population was a great asset saying:

It is only just to state that quite a number of these foreign born citizens came to this country in early childhood and are as American in sentiment and principle as if their ancestors had come over in the Mayflower.

Thayer went on to praise the average Denver resident for being "ahead of the average citizen of the United States," because they were healthier, more enterprising (on account of leaving home and staking new roots in the West), and for being financially prosperous enough to have made the move.

He went on to say that the "very poor and shiftless...whether native or foreign born," were more likely to remain on the Atlantic seaboard than the more industrious types who made their way to the Mile-High City.

If you've spent more than about five minutes in Denver, you've probably heard someone utter our unofficial state motto, "We get more than 300 days of sunshine every year here." While there's been some debate about whether that's actually the case or not (short answer, it depends on how you define sunshine), Denver is unquestionably blessed with some pretty mild weather. That's the case today and it was certainly the case back in 1898.

In a chapter titled, Denver as a Health Resort, Thayer points out that from July 20, 1872 to February 22, 1885, there were only 32 days that the sun did not shine on the Queen City of the Plains.

So what was the cumulative effect of all that sunlight? According to Thayer it meant that Denver had a death rate of only about 11 per 1,000 residents, and that number went down to 9 per 1,000 if you subtracted folks who passed from consumption.

The picture Thayer paints of Denver is one of a cosmopolitan city that's full of dynamic people and cultural intuitions, thriving businesses, and plenty of sunshine and fresh air. It's an image of Denver that was as true in 1898 as it is today.

Thanks, Brian. How enlightening!

Hence the name: Queen City of the Plains (empathize "Queen")...such a beautiful, wonderful, amazing place to call home--'tis a privilege to live in Colorado--particularly Denver, Colorado! Very glad I was born & raised in the Mile High City. Thanks for the post, Brian--really enjoy your blogs ;-)!

I have an original copy of the book, but the photo shown here of the Brown Palace is not the same. I wonder if there were different printings of the Thayer text. Any help on this?

Hi Rich - Thanks for reading and commenting! There were, indeed, two printings of this title, one in 1898 and another in 1906. I'm guess that yours is the 1906 version.

My copy shows a copyright date of 1898 and a title page giving 1902. It has been in the family since then. The photo of the Brown shows only the hotel itself in sharp, sunny detail...no other structures in view.

Interesting. This title must have been popular enough to run through at least three printings.