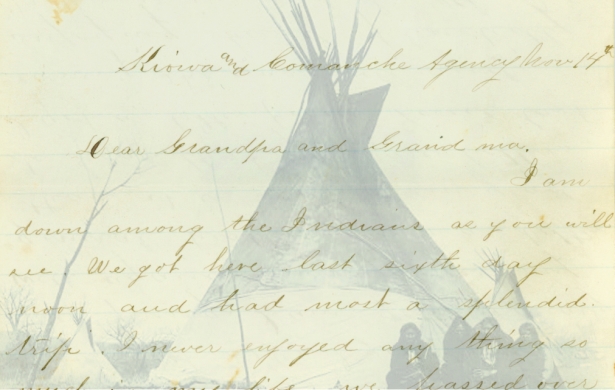 At the time of its acquisition, not much was known about the letter's origins. A girl named Delphinia (no last name noted) had penned the letter to her grandparents, dating it simply "Nov. 14." Delphinia's letter describes her journey to Fort Sill; her observations of Native Americans; her father's work with the Kiowa and Comanche people; and the state of her health. She concludes the letter by urging her grandparents to "Write soon and direct to Kiowa and Comanche Agency, Fort Sill, Indian Territory."

Several crucial questions about the letter needed to be answered before the item could be described in the DPL catalog.

When was this letter written? Who was Delphinia? And what brought her to the Kiowa and Comanche Agency?

The contents of the letter itself offered several subtle clues that helped solve the mystery.

The return address in the letter is "Kiowa and Comanche Agency, Fort Sill, Indian Territory." Fort Sill is located in what is now Okahoma, and Oklahoma became a state in 1907. Thus, the letter had to date prior to 1907. Also in the letter, Delphinia mentions:

Papa and some of the rest have gone to church, but I felt too tired to dress up to go so far.... 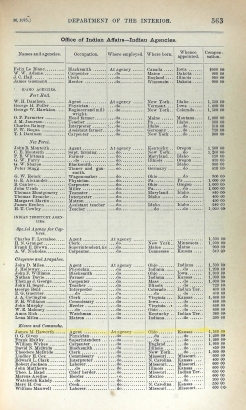 Delphinia, the letter's author, had a fairly uncommon name. Searching the 1880 census in Ancestry Library Edition (available on all DPL computers), an advanced search was done for "Delphinia" with a birth date ten years within 1860 and a birthplace of Ohio (the letter had mentioned an earlier move from Ohio).

The results of the search seemed off, until I reached a record for Delphina Cochrane living in Olathe City, Kansas. Olathe City certainly wasn't Fort Sill, but this record indicated Delphina was living in a house with her father, James M. Haworth, whose occupation was "Indian Inspector." Had James M. Haworth ever been involved with the Kiowa and Comanche Agency in Indian Territory?

A quick Ancestry search for a James M. Haworth living in Indian Territory brought up an 1875 record in the Register of Officers and Agents, Civil, Military, and Naval in the Service of the United States, which showed James M. Haworth as the Indian Agent for the Kiowa and Comanche Agency.

A search for biographies of James M. Haworth led to Burritt M. Hiatt's article "James M. Haworth, Quaker Indian Agent," originally published in The Bulletin of Friends Historical Association (Autumn 1958). The article notes that the Haworth family moved from Cincinnati, Ohio, to Olathe, Kansas, in 1870 due to James' health. It also explains that James was appointed an United States Indian Agent in 1872 and remained at Fort Sill until 1878.

In her letter, Delphinia writes:

I don't expect any of my old friends would know me. I have grown considerable since I left Ohio.

The 1880 census lists Delphina Haword Cochrane's place of birth (as well as her parents') as Ohio, and she is noted as being 23. If Delphinia's letter was indeed written in 1875, Delphinia would have been 18 years old at the time—an age which matches the handwriting and tone of the letter.

4. Link Found in A Memorial of James M. Haworth

In her letter, Delphinia mentions that she arrived in Fort Sill "...last sixth day noon and had most a splendid trip." If Delphinia's father had moved to Fort Sill in 1872, why did it seem that Delphinia was just arriving there in 1875?

The 1886 publication A Memorial of James M. Haworth, Superintendent of United States Indian Schools, sheds some light on the mystery:

Mrs. Haworth was present [at Fort Sill] irregularly, dividing her time between this home and the other in Kansas, where some of the family always remained.

From the letter we also know that Delphinia's stay in Indian Territory was temporary, as she mentions:

I expect perhaps to come East after I goes home in the spring. 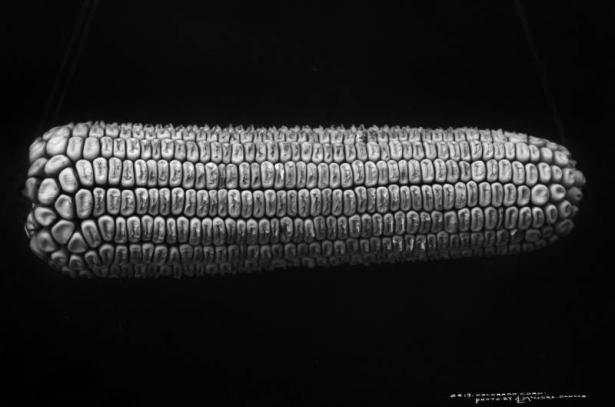 Delphinia also wrote of her father's accomplishments in her letter, saying:

I think Papa is doing a great of good with his Indians and they try as near as possible to do as he says. Some of them have raised corn and are selling it at a dollar a bushel.

Delphinia's observation corresponds to an 1876 annual report of the U.S. Secretary of the Interior, which mentions the following:

Last year was the first for most of them to put their hands to the plow. The Kiowas and Comanches sold near five thousand bushels of corn at $1 per bushel, either in trade or money. 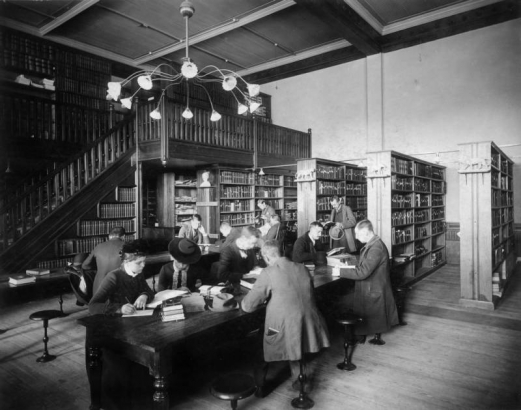 The Delphinia Mendenhall Haworth letter is an example of how some genealogical sleuthing can bring context to historical materials. Paying attention to subtle details in letters can reveal information about author, date, time and place.

Ready to do some sleuthing of your own? Explore the Western History and Genealogy department today!

Fascinating read! I really enjoy these type of detective stories. I wonder if DPL would consider publishing a series of these detective stories for teachers using DPL resources. I'd buy one!

Thanks, Toby! That's an excellent idea that I will share with my WHG colleagues.

Thanks! An interesting and enlightening story; so much work (in so many parts of life) goes into what we mostly take for granted. Also, a reminder of how documentary pieces of our lives should be labeled/annotated; I sure don't do it anymore, and I'm now clueless about a lot of my own life memorabilia!

Thanks for reading and commenting, Steve! Indeed a great reminder to label/annotate one's memorabilia!

I absolutely loved this article about genealogical sleuthing. It must have been a satisfying adventure to track down this mystery with only a small handful of clues.

I'm glad you enjoyed it, Georgia! Thanks for reading!