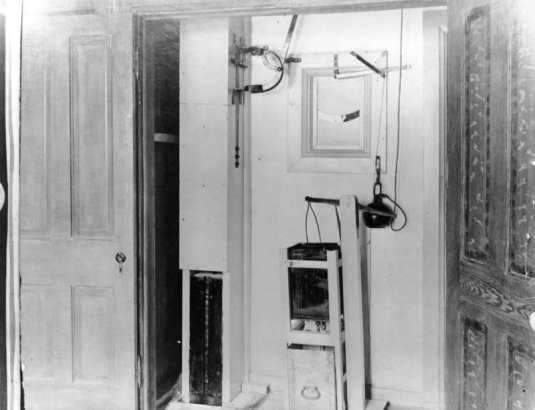 The death penalty in Colorado has been a source of controversy across the state since at least the 1870s. While some Coloradans argued whether or not the death penalty served as an effective deterrent against the most heinous of crimes, others were more interested in how it could be administered in a humane and tasteful manner. That argument led to the creation of one of the oddest devices in Colorado penal history, the DIY death machine.

We ran across the strange story of the DIY death machine in Michael L. Radelet's fascinating, well-researched book The History of the Death Penalty in Colorado (2017, University of Colorado Press). Radelet's even-handed account walks readers through virtually every Colorado execution beginning with Denver's earliest days, while examining the legal and social issues surrounding this grave issue.

As Radelet points out, executions in late 19th century Colorado were huge events that drew thousands of bystanders and often took on a ghoulishly festive atmosphere. To make matters worse, the traditional gallows employed to hang the convicted criminals (we're leaving extrajudicial executions out of this discussion) sometimes didn't provide a quick death by breaking the neck. That frequently led to the gruesome sight of a convict's dying body twitching on the rope as he or she was slowly strangled.

In 1889, the Colorado legislature passed a series of laws that moved executions out of the public space and into the confines of the State Prison in Cañon City. The revised laws also limited the number of witnesses who could be at an execution and made the proceedings a relatively secretive affair. They also introduced a new, proprietary gallows (pictured above) designed to provide a swift exit to the condemned by jerking their necks upward, rather than leaving them dangling.

While there's some doubt as to who actually designed the device, it is generally credited to Warden J. A. Lamping or Deputy Warden George E. Dudley, who likely had the help of a prison carpenter or handyman on the project. The "self-hanging machine" is rightly described as a Rube Goldberg contraption that uses the prisoner's own body weight to trigger the slow release of water from a jug. As the water drains, it triggers a 250-300 pound weight which would drop to the floor, causing the condemned to shoot towards the ceiling. Theoretically, this would break his neck in a swift and "humane" manner.

There's no question that the self-hanging machine solved some of the problems it was intended to address, but there was a catch, a long wait. During a traditional hanging, the prisoner is dropped immediately. With the self-hanging machine, witnesses described an agonizing wait as the prisoner's weigh slowly set the gears in motion. According to a 1896 Denver Post article, as reported on by a 1971 Empire Magazine article, the wait seemed, "...almost an eternity" lasting as long as four minutes.

Beginning with the November 8, 1890, execution of Noverto Griego, the self-hanging machine was the official means of execution in the state of Colorado.

Radelet points out that generally, the machine worked as promised and dispatched the condemned in a manner that was described by the Rocky Mountain News as a, "...flight into eternity." The New York Times described the device as an, "upright jerker" and local wags engaged in some genuine gallows humor by describing the process as, "jerked to Jesus."

That said, not every execution went as smoothly as promised. An 1895 account from the Denver Post, as retold by Radelet, describes a condemned man being jerked nearly to the ceiling by the weight and still not dying quickly.

Colorado kept the self-hanging machine until December of 1933, when the last Colorado prisoner made his "flight into eternity" on the device. During that 43 year stretch, 45 inmates were executed in this manner. Once the DIY death machine was no longer operational, Colorado switched over to the gas chamber, which was used until 1967. Since 1967, only one inmate has been executed in Colorado. He was dispatched via lethal injection.

That's crazy!! I'm looking at the picture but don't see how it worked. But like the article says it has something to do with those weights that I see. 45 inmates executed like that! RIP all.

Hi JC - The whole contraption is a bit tough to visualize, but the key component that's visible in this picture, which was taken from the outside of the chamber is the jug of water that, when tipped, triggers the larger weight (not pictured) to fall and jerk the condemned vertically. On the other side of the door was a small platform where the inmate would stand. The whole device is a bit mind boggling.

These devices were used elsewhere in the country.

The Wyoming state penitentiary in Rawlins had one, though It was replaced with a traditional drop gallows following the lengthy execution of Tom Horn in 1903. The old Connecticut state prison at Wethersfield had a similar device too until replacing it with the electric chair in the mid-1930s.

The jerk up gallows were known as Julian gallows, after their inventor, Cheyenne architect James Julian.

If you look on YouTube, you can see a demonstration of the device using a miniature model and doll at the Wyoming penitentiary museum.

Thanks for sharing that with us, Anthony.

YouTube video shows that the Julian Gallows at the Wyoming Penitentiary was indeed water-activated, but rather than jerking upward, it dropped the prisoner through a trap.