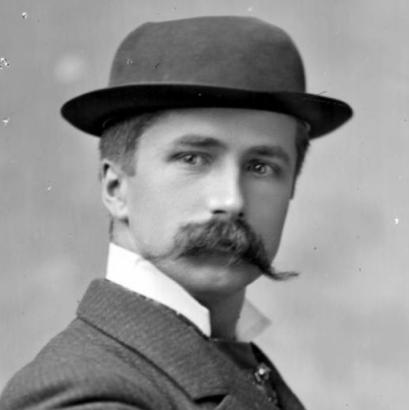 David Francis Barry was one of a handful of photographers who made unique contributions to the historical record, utilizing the new and ever evolving technology of image capture on glass plates. To people in the eastern United States, and in Europe, photographs of the Western Frontier were a new look into a wonderful world beyond their wildest imaginings, and good cabinet card photographs of the right subjects sold like hotcakes. Today, we can still look through Barry's lens into the eyes of major figures - Buffalo Bill, George Armstrong Custer, Army Generals, Sitting Bull, Gall, and a host of other Native Chiefs.

Barry was born near Rochester, New York on March 6, 1854, and in 1861 his family moved west to Wisconsin. Around 1870 Barry worked carrying water for an itinerant photographer named O.S. Goff, a relationship that was to be reestablished a few years later. Not much is known of Barry's life from 1870 until Goff hired him in 1878 to help him in his gallery in Bismarck, Dakota Territory. Here, Barry learned the finer points of photography and became Goff's apprentice, business partner, and employee. 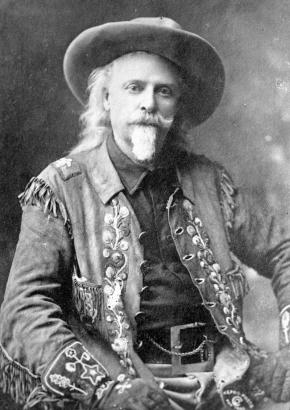 Between 1878 and 1883, Barry traveled to Fort Buford, Fort Yates, and other forts in the Dakota Territory. He went as far north as Fort Assiniboine in Montana. For these trips he used a portable photographic studio in which he took most of his portraits. He photographed famous Native American chiefs, warriors, scouts, and women including Sitting Bull, Rain in the Face, Gall, Red Cloud, and Shooting Star. Barry also photographed some of the most important forts and battlefields of the Plains Wars, military officers including General George A. Crook, soldiers, trappers, and pioneers. In 1883 Barry returned to Bismarck where he operated a studio and gallery. He established a friendship with Buffalo Bill Cody and photographed members of his Wild West Show. 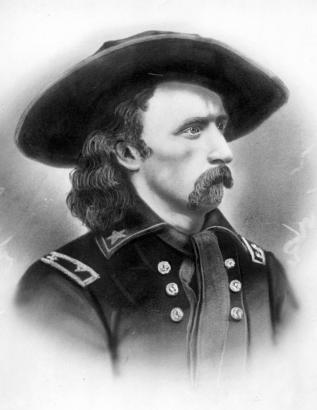 Many of Barry's images have become iconic symbols of the American West, and have preserved incomparable glimpses into a long-gone world. 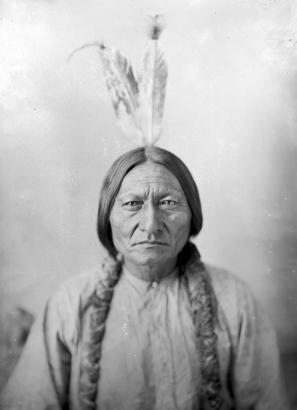 Tatanka Iyotanka, or "Sitting Bull," was a leader in the rebellion against the white invaders, whose vision of Custer's defeat at Little Big Horn that came true under his leadership elevated him to the status of Shamanic Priest/General. After his inevitable surrender in 1881, in 1885 Sitting Bull was allowed to leave the reservation to be an attraction in Buffalo Bill's Wild West Show. He earned about $50 a week for riding once around the arena, a thrill for wide-eyed locals. Some say that he cursed the audiences in his native tongue during the show, but opinions vary. Historian Edward Lazarus wrote that Sitting Bull reportedly cursed his audience in Lakota in 1884, during an opening address celebrating the completion of the Northern Pacific Railway.

Sitting Bull stayed with the show for four months before returning home. During that time, audiences considered him a celebrity and romanticized him as a warrior. He earned a small fortune by charging for his autograph and picture, although he often gave his money away to the homeless and beggars.

Touring with the Wild West show, Sitting Bull met Annie Oakley. He was so impressed with Oakley's skills with firearms that he offered $65 for a photographer to take a photo of the two together. The admiration and respect was mutual. Oakley stated that Sitting Bull made a "great pet" of her. Over time, Sitting Bull's respect for the young sharpshooter grew. Oakley was quite modest in her attire, deeply respectful of others, and had a remarkable stage persona despite being a woman who stood only five feet in height. Sitting Bull felt that she was "gifted" by supernatural means in order to shoot so accurately with both hands. As a result of his esteem, he symbolically "adopted" her as a daughter in 1884. He named her "Little Sure Shot"— a name that Oakley used throughout her career.

Annie Oakley (1860 – 1926), born Phoebe Ann Mosey, the iconic American sharpshooter and exhibition shooter was a major attraction in Buffalo Bill's Wild West show. Perhaps Oakley's most famous trick was her ability to repeatedly split a playing card, edge-on, and put several more holes in it before it could touch the ground, while using a .22 caliber rifle, at 90 feet. 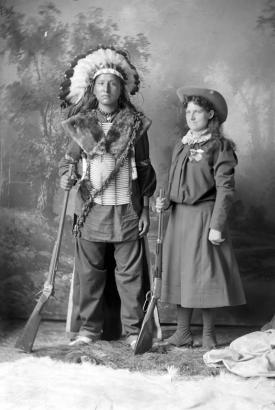 Here Oakley poses with an unidentified Native American man. He is probably an extra in the Show's cast, wearing whatever "Indian" costume components in the studio dressing room that fit well. Commercial studio portraits from this era, and Wild West Show publicity photos were often made with such indifference to authenticity or tribal custom. D.F. Barry's Native American portraits avoid this and he is careful to identify the sitter, with them in their accustomed regalia. Few of his images, alas, were taken in indigenous settings, showing actual habitat and living conditions, as do the incredible photos of Edward Boos, the subject of another blog entry. 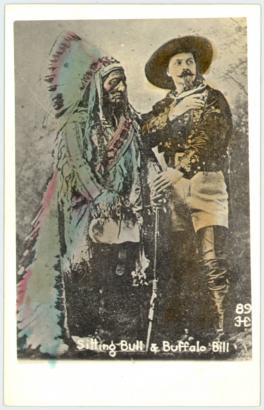 Just as we do today, classic photographs were duplicated in endless variations, colorized, collaged, and retouched - by hand! 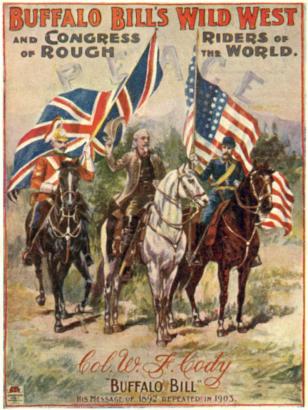 [between 1925 and 1950?]
Buffalo Bill's Wild West and Congress of Rough Riders of the World

D. F. Barry was often part of the Buffalo Bill entourage, providing crisp portraits of the major players. No doubt he worked with with Nate Saulsbury, originator of the poster above. Salsbury, Buffalo Bill's publicist, was played by Joel Gray in Robert Altman's delightful 1976 look into the world of the Wild West Shows "Buffalo Bill and the Indians, or Sitting Bull's History Lesson," with Buffalo Bill played by none other than Paul Newman, and Harvey Keitel and Geraldine Chaplin in supporting roles to top things off.

Browse our entire selection of 978 Barry photos, or narrow your search by adding "Native Americans," "uniform," or "feathers." 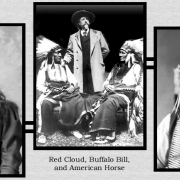 D.F. Barry's I have had the opportunity to see a hand colorized photograph of "American Horse" that remains in the Barry family.

D.F. Barry is my great grandfather - my father has numerous photographs that used to be owned by his parents (my grandparents). It's wonderful to own a piece of history that started with my ancestors.

Dear Ms. Keating, I am a historian currently conducting research in David F. Barry and wonder if I might contact you.
Michael Fox, Curator of History
Museum of the Rockies
Bozeman, MT

Berry retired in Superior Wis. His glass plates and Indian photos were on file at the Fairlawn Museum (Superior),but they sold them a number of years ago to the Western Museum of Denver. $ from sale went to buy new tombstone for Berry in Greenwood Cem, S of Superior. His name by Indians was "Little Shadow Catcher" It is on the tombstone also
H. Heath.- Historian hredfeather@yahoo.com

Hi Karen,
I am a photographer and I admire your great grandfather's work. He inspires and informs my work each day.

we were under the impression that DF Barry did not have any children. He is my husband's great-great uncle.

He is my great great uncle.

He’s my great great uncle too.

Hello. Do you know who owns the rights to his images? I'm a member of the Crow Tribe in MT

Thanks for asking, Michael T. Images published prior to 1925 are in the public domain and are able to be used by anyone for any purpose. Denver Public Library provides access to images to the public, but rights assessment is up to the individual and will depend on the particular image and the individual's (or organization's) particular purpose.