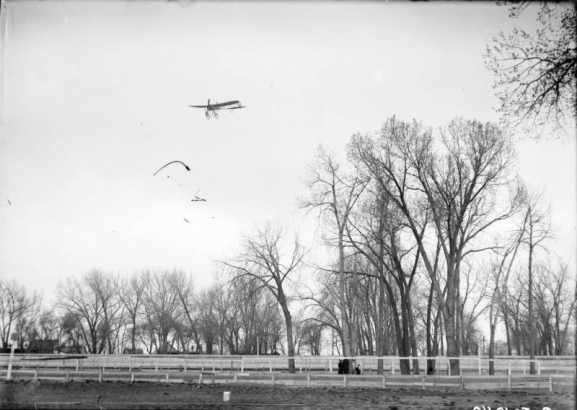 On August 21, 1909, two Denver teenagers embarked on what seemed like an impossible dream; build an airplane from scratch and take to the skies.

Despite the obstacles that stood in front them, no money; no aviation experience; no engineering experience; and little in the way of formal education, Frank and Jules Vandersarl achieved their dream and made their way into aviation history.

The story of the Vandersarl brothers and their homemade Blériot monoplane is a tribute to the do-it-yourself (DIY) spirit that helped shape the Trans-Mississippi West and is found throughout our Western History and Genealogy collection.

The Dawn of the Aviation Age

Though the Wright Brothers are credited with the first motorized air flight in 1906, they were hardly the only men on the planet who were experimenting with aeronautics. Across the Atlantic in France, a man named Louis Blériot was right behind the Wrights with his own aircraft, the Blériot.

The Blériot stands out as an engineering triumph with a lightweight frame, fold-up wings and an engine powerful enough to pilot it across the English Channel, a feat Blériot accomplished on July 25, 1909. Though a sixty mile flight seems a pittance today, it was huge news in 1909 and propelled Blériot into the forefront of the aviation world.

Aside from his skills as an aeronautical engineer, Blériot was an extremely sharp businessman. His endless promotions of the plane, which included flying it to ports-of-call across the planet, made the Blériot the number one plane in the hearts of aviators and would-be aviators in every corner of the world...including Denver.

Frank and Jules Vandersarl were, in many ways, very typical 13- and 15-year-old boys when Blériot crossed the English Channel. The brothers came from modest means and were fascinated by the rapidly growing aviation world.

What made the brothers unique was their insatiable curiosity and their above-average, entirely self-taught, mechanical engineering skills.

One thing the Vandersarls did not have was the cash it took to purchase their own Blériot which, according to the authors of The Vandersarl Blériot, would be the equivalent of around $70,000 in today's market. As it turned out, this would not pose a problem at all to the handy Vandersarls.

Working from a set of Blériot plans they clipped from a magazine, the brothers spent the next two years meticulously crafting their own, hand-built Blériot, without the aid of any factory-built parts. (Though they did get some help from the other Vandersarl brother, John.)

On June 3, 1911, the brothers' creation was completed and on June 10 they towed it to a field in Sable, Colorado, for its inaugural flight. (Sable was located in what is now Aurora, Colorado.)

Amazingly, the Vandersarl Blériot took the air and launched the brothers into the annals of aviation history.

Denver-based photographer Harry M. Rhoades was on hand that fateful day to capture what is believed to be the only known picture of the Vandersarl Blériot in flight (pictured above).

What Happened to the Vandersarl Blériot?

What happened to the Vandersarl Blériot after its first lift into the air is nearly as amazing as the flight itself.

In the years following their entry into aviation, the brothers grew up and moved on with their lives. Both Jules and John moved on to other occupations, while Frank remained active in the rapidly growing aeronautics field. His career, which included everything from teaching flying lessons to performing in an air circus, was derailed by the Great Depression, and he lived out his career as a machinist for the City Denver.

Though Frank's aviation career was snuffed out, the world had not seen the last of the Vandersarl Blériot. Frank had the foresight to save his creation and in the 1960s he enlisted the aid of his brother John and his grandson Jules in restoring the old bird.

Sadly, the family restoration project came to a halt when Jules passed away in 1983. Over the next few decades, the old plane changed hands several times and traveled from Colorado to New York to Italy. In 2008, it was purchased by the Aeroplane Collection and shipped to California for a full restoration.

Recreating the Vanderarls' work was an epic task that took engineers several years to complete. Amongst the many challenges presented by the project was building the Vandersarls' engine, which had gone missing sometime during the previous 100 years, completely from scratch.

Working from the Vandersarls' notes and photos of the original plane, Aeroplane engineers were able to revive the plane and on November 12, 2012, it once again took to the sky.

As of this writing, the Vandersarl Blériot is considered to be one of just a few century-old airplanes that's still capable of actually flying. (And it's almost certainly the only one that was hand-crafted by two Colorado boys who did not know the meaning of the word, "can't.")

The Vandersarl Blériot is a shining monument to the can-do spirit that is the hallmark of the American West and a piece of aviation history that's acknowledged the world over.

In the 1970s the Vandersarls were inducted into the Colorado Aviation Hall of Fame and in 2011, their newly restored plane received the Rolls Royce Aviation Heritage Award, which honors authentic restorations of historic planes.

To learn more about this unique piece of aviation history, and the story of the Blériot as a whole, check out The Vandersarl Blériot by Javier Arango and Philip Makanna.

In those days inventors were allowed to soar free. Invent,build,test. All without licenses,regulations or fees.It was a golden era of tinkering. I like Harry Rhoades photos. Check out his book. Its great.

Frank also owned and ran Denver's first airport Denver Union. Also Colorado's early airline Rocky Mt Airways. Air mail routes were also ran
in between air shows to get the public interested in aviation.
Most was lost in the great depression.
I'm his grandson Dana.Jules was one of the brothers. I was taught many skills and lessons from those two great guys Frank and John.
Frank loved everything about aviation from bi-planes to rockets.
I wish he could see the rockets I work with now-but he lives on in my heart.
Frank never returned to aviation after WWII instead he enjoyed the machine shop and helping his son Ed start his business.
We were very close and spent a lot of time together.

Frank first flew in Colorado in a Glider at 12 or so surviving a crash.
Jules was the first of the two to fly the Bleriot.
All three of the brothers were amazing.

Javier has done a superb job on the Bleriot and the book he has done with Philip Makanna is also spectacular.

Hi Dana - Thanks so much for sharing your memories of your grandfather. I was mightily impressed by Jules and Frank's can-do spirit and the fact that their creation is still airworthy. Colorado is lucky to have had them as residents.

Also, the Wrights did not make their first powered flight in 1906. It was December 23, 1903. Earlier that year, they had filed for a patent based on the glider they flew in 1902, and that patent was awarded in 1906, but their iconic first powered, controlled, heavier-than-air, human-carrying flight was the one in 1903.

Hi Jim - Thanks for your insights on the Vandersarl Bleriot. Do you know of any pictures of the plane in flight that are believed to be authentic?

The correct date of the Wright Brothers first flight was Thursday, December 17, 1903. I believe the 23rd was the date that they returned home to Dayton from Kill Devil Hills, North Carolina.

I have authentic pics in flight -original prints with negatives.
So Jim Wright Jr how would you "debunk" those....

Frank was a Great Aviator (not simply a pilot) that did many things to promote aviation to the public and not just use to make money.
For decades in early Colorado he did many aviation firsts and helped get aviation where it is today.
He does not get the historical notoriety he deserves. Guys like the Jepsons of DIA fame would come by the house and talk with him and you could tell Frank was one of their early hero's.

Hi Dana - There's no question in our minds that the Vandersarl brothers were pretty amazing aviators. Also, we'd love to see any additional pictures of their flight - and maybe even add a copy to our collection -shoot us an e-mail at history@denverlibrary.org sometime - and thanks for sharing your comments with us.

The plane flew again in 2012 again proving the mods the VanDersarl boys did to the Bleriot plans.